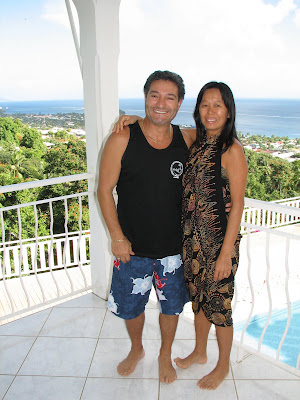 We're still at Beveridge Reef where the winds have begun to decrease and I'm pretty sure we'll get some exploring done this afternoon.

I've been meaning to summarize my feelings about French Polynesia for some time. I guess now is the time. Love, hate relationship is too strong. There was little to hate and plenty to love but there are strong contradictions. For a number of reasons, chiefly the limit of ninety days on our visas, we had to move through the islands faster than we wished. But, contradiction, we were happy to leave as well. In my opinion the only reason, today, for a person to go to Tahiti is to have their boat worked on or get stuff delivered. Not that it's bad place but there are many better and far, far less expensive. We had some really good meals thanks to the guidance of our friends and we got what we needed and, like most cruisers, got out. The Marquesas are lovely. Many of the Tuamotus are South Pacific dream places. The Society Islands beyond Tahiti are very beautiful and, other than Bora Bora, relatively unspoiled. We especially liked Moorea and Huahine. Bora Bora is beautiful but far over developed and the hotel industry appears to be in collapse. Hanging over most of French Polynesia is the expense of the place. It is, I believe, the most expensive place in the world to visit. There are too many other beautiful places for people to go and get far more for their money. For a yacht moving across the South Pacific it's still worth doing, almost a 'must do'. 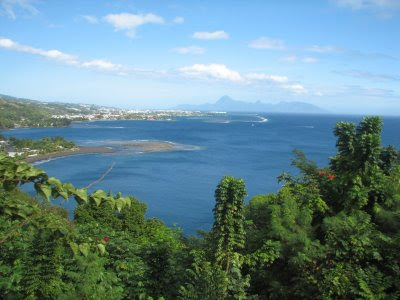 But for a person looking for an exotic vacation I'd recommend looking elsewhere. Quick example, it costs exactly the same in US dollars to rent a scooter for four HOURS in French Polynesia as it does to rent one for a WEEK in the Cook Islands. And the Cook Islands scooters are much better Yamahas. Another example, a case of diet coke costs $65 US in French Polynesia, is costs about $25 US in the Cooks. We got used to paying $40-$80 for a very simple lunch for two in French Polynesia. The same lunch would cost $8-10 in the Cooks. The only thing reasonable in FP is the very good baguettes which are cheaper than in the states. A great fresh baguette can be had for about $.75 US. Everything else you can think of is so expensive as to be ridiculous. A couple bags of groceries will shock the hell out of any 'new to the islands' shopper. The Polynesian people were very friendly and kind and the French we met were equally charming and very generous. But the islands live off the French subsidys. It's generally felt that there are jobs for anyone who wants to work but, for those who don't, there's an elaborate subsidy system. To balance some of that cost taxes are really high. So few new businesses are interested in coming.

In contrast the Cooks are still in a loose association with New Zealand but I don't believe there's any subsidy system. It's pretty common for Cook Islanders go to New Zealand and work and send home money. Somehow Rarotonga seemed a livelier, more vital place than anywhere we found in FP, including Tahiti. It's a small place but it's bustling in a good natured manner. There's definitely a different attitude. The good natured Polynesian kindness and sweetness is still there but they seem to be having a lot more fun with life. 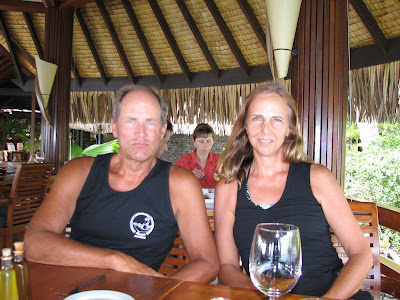 So I'll hazard some very broad conclusions and say that what we're looking at is a high tax, high cost, socialistic society versus a low tax, low cost, more free enterprise society. Also we're looking at a legacy of different colonial systems. In fact French Polynesia is still French whereas the Cooks and Niue are now independent of NZL and Tonga has always been independent. The French we talked with in Papeete and elsewhere are very aware of the problems and feel that things have to change but say that no one is willing to take the political heat for the inevitable, very painful, change. Judging from what we saw of hotel occupancy, change will come one way or another.

So, what would I recommend for a non sailor who wants to visit FP? First, understand your wallet and kiss much of it goodbye forever. Second, stay at the Mai Tai in Fakarava or the Kia Ora in Rangoria or the Shangri La in Moorea. You'll have a good time and have chance at a real South Pacific experience. There are a lot of smaller and very nice places but I'd stay away from Tahiti and Bora Bora in the Society islands. Moorea, Huahine, Tahaa and Raiatea are more beautiful and there are many places to stay.

Better yet, go to the Cooks or the Vava'u group of Tonga.

So, I guess no one has asked, but those are my opinions. Janet feels you could spend as much money in some other very nice places. I think the point is you can't avoid spending the money if you're in FP. Time for a little lunch and an exploration. 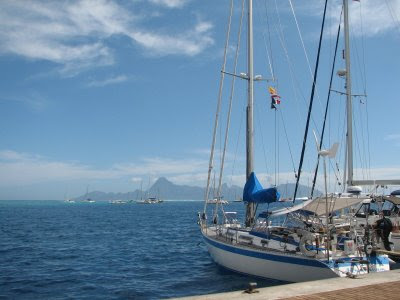 Posted by Bill and Janet Wickman at 3:40 PM