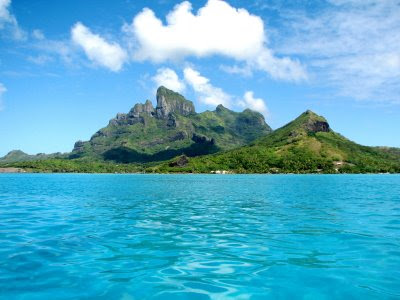 We came over from Tahaa on the 10th. A very nice twenty seven mile trip in total. About 22 of that was a nice open water broad reach in 10-15 knots of easterly breeze on a beautiful day. Bora Bora certainly has the most dramatic of skylines and it is, like all these islands, every possible shade of green with a lagoon, like all these lagoons, every possible shade of blue. We'll be here till the end of the month and the jury is still out on our overall opinion of Bora Bora. Certainly it's beautiful but it's small and lacks the shear scale of Tahaa or Raiatea. It's also very discovered and although most of these super luxurious fantasy hotels seem to be about 20% occupied, prices everywhere are even higher than the rest of French Polynesia. However, there are also more tourist types to be seen wandering around town than anywhere we've been since Papeete.

We've got a nice spot in front of the Bora Bora yacht club, a very famous place amongst the cruising community but just an overgrown shack on new wooden landing. 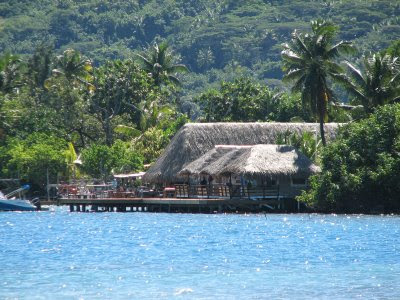 They've recently changed ownership and the restaurant is not reopened yet but the bar is open and there are showers, water and laundry. Libation, showers, water and laundry facillities will gather cruisers from far and wide! We've had a couple nice evenings and we've got plans for another....we had lunch at Bloody Mary's...and did the Bora Bora version of the dance contest the 9th. We're going back tonight for the final. We have a frozen pizza in the fridg...we may have one of those libations at the yacht club before dinghy riding over to the village for the dancing. More later! 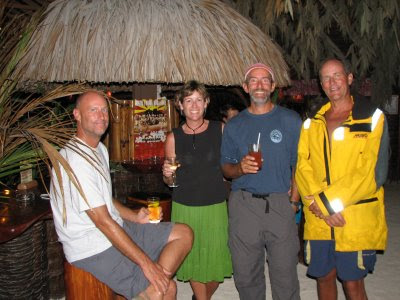 Later....we did go to the dance contest and it was a good evening. This was just the couples competition and the awards ceremony. The couples and the drumming/music were great! I think the level of dancing and music here may be higher because of all the hotel business. The show itself lacks the charm we experienced in Hauhine. These folks have a constant motivation (money) to practice and perform. The Polynesian drum bands are really impressive. You get 25-30 guys beating on everything from wooden drums made from 20' palm logs to big wooden and leather covered bass and kettle type drums plus a lot of smaller stuff and it is powerful! War and love seem to need little but some really good drumming in this part of the world. Last night the show went well until the final couple. It started to mist a little and in the last portion of their dance the downpour began...did I say the Bora Bora contest is outdoors? The dancers finished but everybody else ran for cover. There were several thousand people hiding under every eve and roof in town! It lasted abut half an hour and the awards presentation was about to start when we decided to dinghy back to out cozy boat...and didn't get a drop on the mile or so ride.

So the big Bastille Day celebration is tomorrow....also Janet's birthday.....wish her a happy birthday! 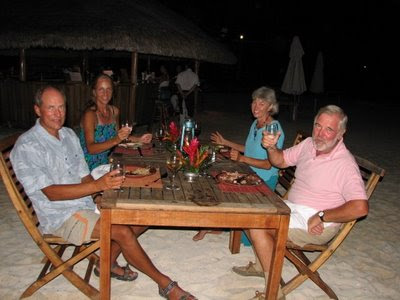 Posted by Bill and Janet Wickman at 1:36 PM