And good morning sports fans. It's been an action packed week. We're med moored at Avatiu Harbor in Rarotonga with our friends 'Shilling' on one side and 'Traveler' on the other. There are seventeen boats at Rarotonga today and room for a few more although this is a tight little place with no room for foolishness. Proof of that is the impressive recent wreck of a steel coastal trader on the breakwater at the entrance to the harbor. 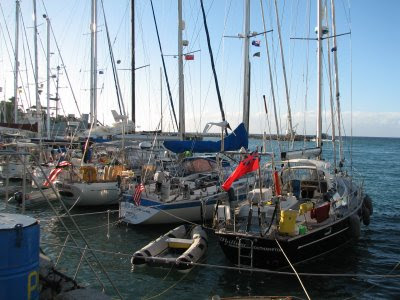 He didn't quite get out in time when a big norther brewed up. The harbor is untenable in a strong northerly sea. Rarotonga is lovely and we're just beginning to explore around. Everyone is very friendly and, great joy, everything is in English!

The voyage over was reasonably fast but 'boisterous'. Several boats were ready to leave Bora Bora and we all had been watching the weather. It had been blowing out of the southwest for days, since the previous bunch left and got clobbered, and no one wanted to beat into the wind for 550 nautical miles. It looked like the wind had shifted around enough to the south, as a big high was approaching, that we could initially leave and hold a heading a few degrees north of course close hauled and that the wind would back around so we could reach into Rarotonga, true course 237 degrees. There was a building swell out of the south but you can't have everything. That's pretty much what happened. Shilling, Meridian and ourselves left Sunday morning close hauled in ten knots or so of SW breeze and six feet of southerly swell and over the next four days the wind backed around to a close reach and finally a beam reach into our destination. Of course the swell built as well as the wind and we had 10-12 feet on the beam or slightly forward the entire trip and 20-25 knts of wind. Not a restful sail. But we got in at dawn on Thursday, after throttling back quite a bit during the night so as to arrive in daylight, and Shilling and Meridian were not far behind. Course made good, 536 knts. Actual distance sailed, 570 knts. Speed made good, 5.73 knts. Actual average speed, 6.09 knts. Not bad for a trip 90% to weather. We've put a total of 5616 nautical miles under the keel so far this trip. 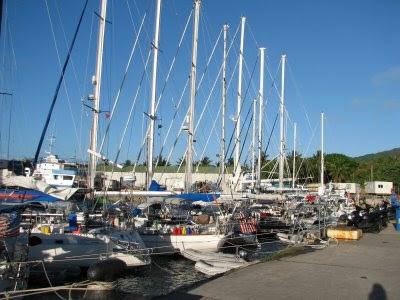 So now this segment of the 'fleet' is all cozy in Rarotonga. It's definitely a different place than French Polynesia. It's very nice and we've already had a lot of fun at the big annual Constitution Day Parade yesterday. One of the guys organized a yachtie entree to the parade. The theme of this years parade was " Women of Courage" so the guys all dressed up as south seas babes with grass skirts and coconut shell bras and the girls got to ride on the float truck we arranged and we were the ' foreign entree'. They seemed to think we were pretty funny and we made the local television news last night. Pictures will follow.

I'll have a lot more to say about French Polynesia and Rarotonga in a few more days. There are some interesting contrasts. Right now we're very happy to be here. Janet is out shopping at the big Saturday morning produce market. And I'm going to try to get this Wifi system to work.

Posted by Bill and Janet Wickman at 1:31 PM