"To be on the wire is life, the rest is waiting."
-Karl Wallenda

It's a rainy day in Bora Bora. This makes the third day of this little weather event and we'll be happy when it passes on. A bunch of boats left a few days ago feeling that all the signs were good for a westward passage. They've got more or less clobbered by greater than forecast winds and seas. Most of the SSB conversations are about hunkered down boats riding it out but making good progress. Although there really hasn't been much damage there hasn't been a lot of R&R amongst the departed fleet. The rest of us are hanging out in gusty, rainy conditions and watching the weather. We don't have to go anywhere until the end of the month so, although we're a little bored right now, it'll clear out and we can have some fun while waiting for the next nice looking weather window. That may be later in the week, we'll see. 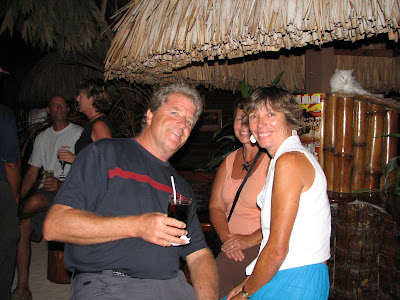 So what do voyagers on Bora Bora do when they are killing time? Grown up stuff like watching the cruising kids have a ball tearing up the lagoon in dinghies and various inflatable toys, getting together at Bloody Mary's for happy hour, swapping books and getting in some quality reading, and completing a few small time boat projects. Some folks are organizing a poker game...wear lots of clothes. Very relaxing, but not out there on the wire. A couple boats may leave tomorrow, their visas are up, they have kids aboard, big boats, and they'd rather have a light air passage and motor if necessary than risk heavier winds and seas. We've come to know more and more of these people and it is a great bunch. Bora Bora is the last big get together place before people take various routes west. We'll head for the Southern Cooks and Rarotonga. Others will go to the Northern Cooks and Suvarov, etc, etc. Others head for Nuie and a couple boats are heading directly to Tonga. The general idea is to end the season in Samoa, Tonga or Fiji. Most boats will then bail for New Zealand or Australia. 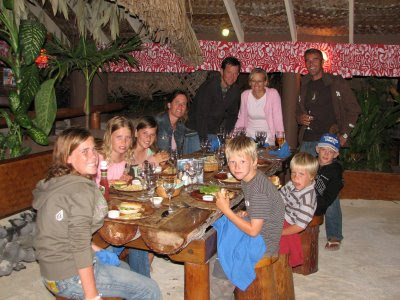 Tonga is the most likely place most of us will be together again and there will be more than a few adventure stories generated between now and then. Word is that 'Little Wing' has a sprung mast in Suvarov.....how will that be fixed? It will be a war story, one way or another.

So we've celebrated Janet's birthday, coincident to the Bastille Day celebrations, and done some socializing. We've got a few little things to do before heading west but it's mostly bureaucracy and provisioning...the wire awaits. 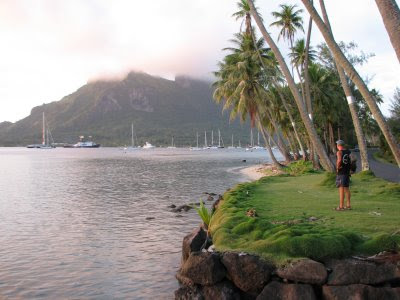 
Posted by Bill and Janet Wickman at 1:35 PM