We arrived in the Vava'u group of the Kingdom of Tonga the 22nd after losing a day crossing the dateline. We never had a 21st. We departed Niue the 19th and had a fast passage averaging 6.4 knts for the 250 mile trip with only a reefed main up for most of the run. It was entirely a deep broad reach in 15-25 knts and 6-8 feet of SE swell. A little lumpy. 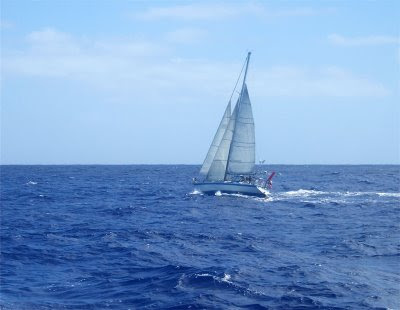 There wasn't any point in going faster, we arrived about midnight as it was and anchored out before entering the harbor at Neiafu after sun up. Although Tonga is still a west longitude somehow they manage to slide into the next day. They must feel it's some advantage to them but it sure screws up the navigational process for those who still depend on traditional methods. And for those of us who do not, these islands are about two tenths of a nautical mile east of their charted position. So using a GPS chart plotter to pick your way around the reef structure is sure to put you on the hard. This a place for visual pilotage and radar, the GPS is good for mapping only.

I don't believe I said much about Niue. Internet service there was minimal and HF propagation was poor. Niue is lovely, very quiet and laid back with the nicest people we've met anywhere. The Washaway Bar is the absolute classic yachtie hangout. 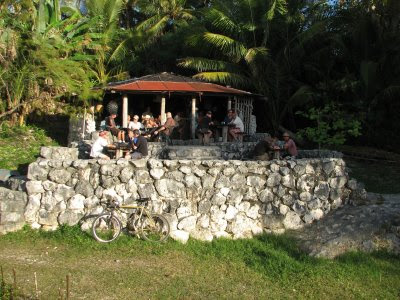 The dinghy landing was always a real challenge in that you land at an exposed concrete commercial wharf (there's no harbor) and hoist the dinghy ashore using a commercial dock hoist after you've jumped, hauled or hoisted yourself. When there's a swell running, and there always was, this can be quite exciting. Everyone always got wet but no one got hurt while we were there. There was usually a matter of a few feet and a couple seconds between success and disaster. Watching our friend's very cute seven and eight year old girls bounding 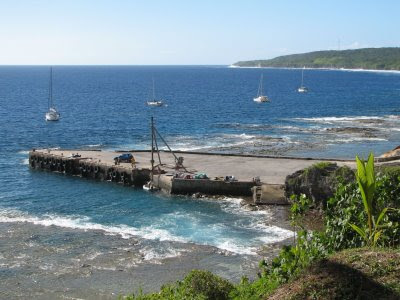 off the concrete wharf into the arms of their parents while the dinghy is poised at the top of a six foot swell which will break about ten feet farther down the wharf was really satisfying. Cruising kids are learning far more than they realize. I think this is a wonderful life for kids and they all seem to be having a great time. We rented a motorcycle and went all over the island. I picked up some road rash and Janet got an exhaust pipe leg burn. Comes from using a crummy old Suzuki 125 road bike on a steep gravel trail with two aboard. Operator misjudgment! My first road rash in about 30 years and Janet's first exhaust burn ever, nothing life threatening.

So arriving here is the completion of our personal version of what's called the 'coconut milk run' across the South Pacific. There are endless permutations but we'll stay in the Kingdom's various island groups until heading for New Zealand sometime in October. We did a bareboat charter here with The Moorings ten years ago and loved the place. It's changed a little, but it's still lovely and laid back and we hear the out islands, where we will spend most of our time, haven't changed at all. Loren and Mary Halverson are coming in to spend some time with us and we'll explore old haunts with them. This is the biggest congregation of cruising boats since Papeete so there's plenty of social scene here when it's desired. We've got friends moored all around us. The Bounty Bar, The Mermaid, the Aquarium, etc. are all owned by ex-cruisers who know the true worth of a hot shower, a cold Ikale (the local brew) and a good crab quesadilla. We're having fun! 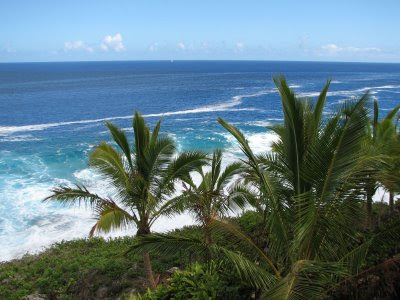 
Posted by Bill and Janet Wickman at 3:38 PM