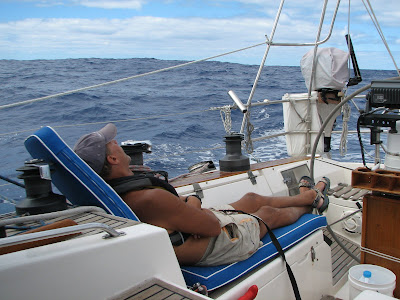 We're currrently anchored in 35 feet of water 125 miles from the nearest land in the middle of the South Pacific ocean. How can it be? Ahh...Beveridge Reef....a poorly charted but well known (amongst South Pacific cruisers)reef about 125 miles ESE of the island of Niue. It's pretty much directly on the way from Rarotonga to Niue so it's a convenient stop with a unique situation. It's a sunken atoll, just a reef with an enclosed lagoon and an entrance but no land. The reef is more or less exposed depending on the tides. It's about 35 ft. deep throughout the lagoon with few hazards or coral heads inside and it's protected from the swell but not the wind. The bottom is sand with good holding. There's the wreck of a 90 ft fishing boat on the reef and not much more. You can't see the breakers on the reef until you're within two miles and there's little radar return. What's more it's location on the charts is about two miles off the GPS positions. Not comforting at all! Fortunately almost everybody knows this and the harbor master at Rarotonga has a nice little GPS surveyed chart of the place, made by a cruiser, that he gives to anyone who asks. It is accurate. How long it will take the chart organizations to get it right is a good question. This is the first place we've encountered with charting problems. There are probably others. So we had a good sail over from Rarotonga. A little slower than we'd hoped due to light winds but of course when we got here the wind began to build and it's been 20-25 ever since. That makes it pretty choppy for snorkeling or running around in the dinghy. Janet went for a long snorkel despite the chop and came back with some nice shells to add to her collection. Tomorrow it's supposed to calm down so we'll stay another day and explore around before heading to Niue.

We did catch a nice 38", maybe 40lb, tuna the day before we arrived. I think we've identified the species as Southern Bluefin Tuna but whatever it is it's delicious. 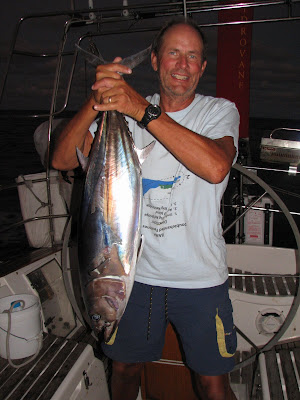 It's a days sail over to Niue, we'll spend a few days there and then head for the Vava'u group of the Kingdom of Tonga. We should have internet access of some kind in Niue so we'll try to send another update with some photos from there.

Posted by Bill and Janet Wickman at 10:56 AM