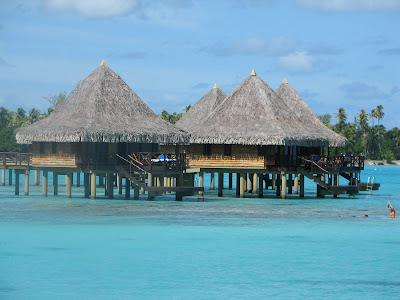 Rangiroa..Metropolis! 2000 people live here. The second biggest atoll in the world. The island of Tahiti could easily fit inside the lagoon. We had a mostly night time sail over from Apataki since it was going to be about twelve hours (84 NM) and we didn't want to leave or enter the passes at night. It was a nice broad reach in 14-19 knts with about four feet of swell on the quarter. We arrived about 0500 and hove too for a couple hours before entering. Even though it was well after low tide there was still a strong outflow. Not an unusual situation in the Tuamotus. Combined with the incoming swell it made for some nice four foot standing breakers in the pass. No problem but you could see how it could become a problem in tougher conditions.

We enjoyed Fakarava and Toau so much we wanted more of the Tuamotus so we decided to go to Rangiroa and stop at Apataki on the way. Toau was so sweet. We had a few days totally to ourselves in the south of the atoll and then moved north to Anse Amyot, a cove where there is a really charming family who welcome boats. Valentine and Gaston kind of run the show but there are four generations of the family plus a few uncles and cousins around all working on their very rustic pension, dive operation, fishing and pearl farming. One story.. about 0800 the husband of a very nice French couple anchored near us bangs on the hull and tells us at 0830 the family is going out to the pearl farm for the day, "Do we want to go?" Yes! 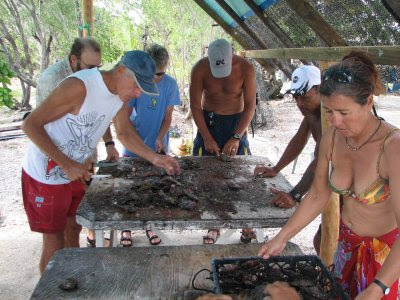 So we dingy over to their dock and eventually everyone piles into two big old home built plywood outboards and we bash several miles out into the lagoon where there is a small deserted moto where they are building up their pearl farm. There are a couple sheds and we clean up the grounds and a few guys go out and pull up a bunch of pearl oysters and spear some fish. We clean oysters for a couple hours, rethread them onto new lines and have lunch...freshly speared parrot fish on a piece of corrugated steel over a fire and rice...and Val gets ready to harvest pearls. We watch her harvest the pearls and reseed the oysters.. a very interesting procedure...and we reset the cleaned oysters and eventually bash back across the lagoon to the cove. A busy day where I worked harder than I have in awhile. We had a nice dinner with the family and two other cruising couples at their "restaurant", a partially enclosed platform over the cove. But they set a very nice table and the lobsters were delicious. A rather full and very enjoyable day. We had a major pearl trading session with Valentine the next morning and I believe we were all satisfied. And we left. Pretty sadly. These are sweet, intelligent, hard working people who we'll probably not see again. The downside of meeting great people in great places is that you're always saying goodbye. 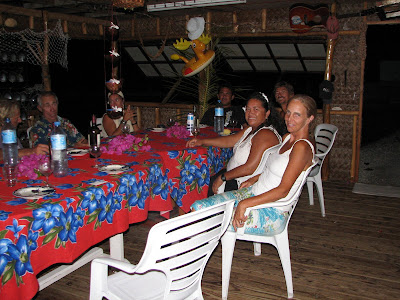 Apataki was nice, another lovely moto, but the wind was building out of the wrong direction for the anchorage. The French boat and an American single hander (Wayne from Moonduster) also anchored there and we had a great conversation over beer and popcorn that night. We all split the next day. Wayne for a more sheltered anchorage on Apataki, the French for Papeete and us for Rangiroa. We should all meet up again in Papeete so it really wasn't goodbye this time, we hope. 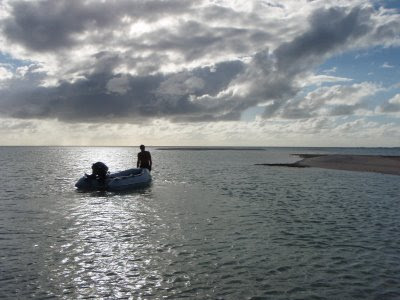 We'll spend another day or two here and then head for Tahiti and, initially, Papeete. As I said we are in civilization again. it's Sunday so most things are closed but we're anchored in front of a VERY upscale 'thatched roof over the water' type hotel and we just had a very expensive and picturesque lunch. We may have a drink there are and watch some Tuamotuan dancing this evening. The tourist scene!

Thanks to everyone for their emails. Once we get into the Society Islands (Tahiti, Moorea, Bora Bora, etc.) we should have real internet access and be able to answer properly.

Posted by Bill and Janet Wickman at 7:15 PM