Right now in Upunohu Bay there are ten boats plus Maltese Falcon at anchor. I say, "plus Maltese Falcon" because it's hard to consider such a vessel a boat. It really is a beautiful creation, a modern square rigger with free standing, rotating masts and the most rakish possible appearance. We saw it enter under sail yesterday and it is most impressive. 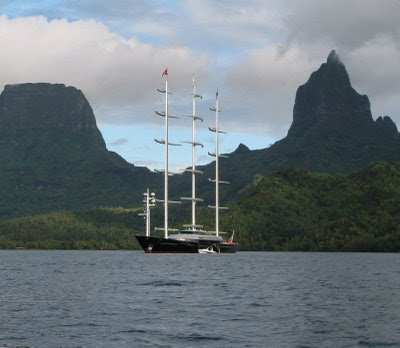 If you're into sailing you know about this ship. I won't bore you any more if you're not...but I will say that pictures do not do it justice. We tool past in the dinghy and wave and they actually wave back. Cool!
Moorea is very beautiful and Upunohu Bay the most beautiful of anchorages. Cook spent seven weeks here in 1769 during his voyage to observe the transit of Venus. The bay named for him is just to our east. He spent his time here but visited "Cook's Bay" by boat. Cook was not a fool. If Tahiti and Papeete were Oahu and Honolulu this would be Maui or Kauai. We like it here.

The escape from Papeete went well. We finished the stay with a lovely lunch with French friends. 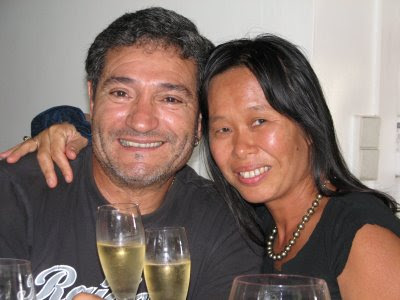 I believe there were twelve adults and seven children. Hors de vours, roast leg of lamb, pommes de terre, salads, cheeses, deserts, five bottles of red, one white, two champagne, and cognac and Southern Comfort for after dinner liquors. It's a good thing we left Papeete. We'd be broken down drunks after much more hospitality. Sweet, sweet people. 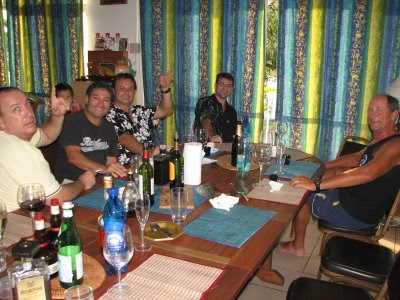 We motored the fifteen miles over to Moorea in company with 'Grace' the 58' cat owned by the South African family we've gotten close to. Very nice people and lovely children on a three year plan for a little fun away from home. 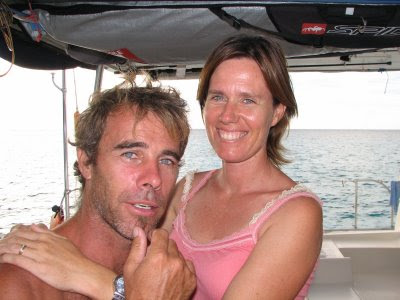 The anchorage is very easy by Polynesian standards. We're in twelve feet of nice sand with not a coral head in sight and plenty of swinging room. We're a couple hundred yards from shore which is a lovely beach with a palm grove and a little park behind it. There are a couple small villages within dinghy distance and a couple very swank hotels on the water in the distance. The physical beauty of the island is almost on par with UaPou but there is a little more development. We've got a scooter rented for the day and we'll get a look around the island by land. Still this is French Polynesia and the most expensive place on earth. I inquired about car rental and the cheapest thing I could find was 9500 cfp for FOUR HOURS! That's about $135! The scooter will cost us 5000cfp for eight hours...whatta deal.

We've been here three days now and will spend a few more before heading for Huahine and the windward group of the Society Islands.

I hear the NWA/DAL talks are at the stage where the principals are trying to settle matters. It could be a great company for everyone if, just for once, things go right.

Love to all,
Bill & Janet
Posted by Bill and Janet Wickman at 10:24 AM