Yesterday was an interesting day...and started out as one of those 'interesting times'. It had been blowing 15-20 knots out of the NW all night and the boat seemed to be bouncing round a little more than usual at anchor so I got up to check on the anchor snubbers and look for chafe,etc. Skipper paranoia occurs most often anchored on a lee shore with a building wind. 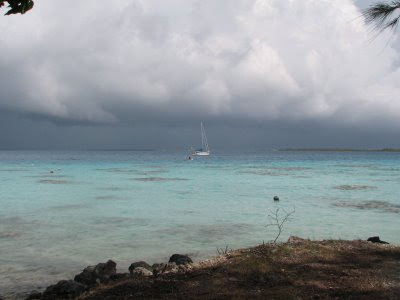 I went forward with a big flashlight and everything was fine. I went aft to look at the dinghy and it was gone! It's hard to over stress the importance of the dink to a cruising sailor. It's your car at the trailhead after a long hike, it's your horse out on the great plains 150 years ago, etc, etc. There aren't any marinas or even docks to tie up to on shore and there aren't any replacements available. People who steal dinks are hung from the masthead if caught, which they never are...In this case theft was the last thing I was worried about. I'm sure you could leave your dinghy, or anything else, lying around on Fakarava for weeks and all that would happen is that someone would cover it up from the rain and secure it from blowing away. Very nice folks here. What I could not recall was how I had secured the little beast after Janet and I got back the evening before. We kind of rushed into the boat and I'm sure now I did not secure it as usual, which is with a round turn and multiple half hitches around a stanchion. (if you don't know knots, use lots) Since the wind was onshore I was pretty sure the dink had been blown ashore somewhere(but where)and that it would suffer considerably from wave action and coral. It looked bad. Come first light I started glassing the coast and another boat (there were five, all Americans, in the anchorage) offered to run me around in his dinghy and search the shore. But, low and behold, it looked like a gray Achilles dink with a black motor was hauled up on a beach a little south of us! As it got lighter it looked certain so I swam the few hundred yards to shore and there was our beautiful dink, in good condition, hauled up on a nice little beach beside a fisherman's house and tied to a tree. 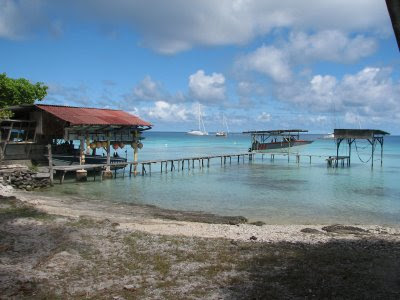 The engine started and we had a dinghy again, yea! We went back at a decent hour, gave them a bottle of wine and thanked them and had a good laugh. They had seen it bouncing around on their reef and brought it in. Like I said, these are very nice people. And we were very lucky.

We got Ken and his gear on a ride to the airport (Fakarava Intergalactic) and he was off. He had injured his back ashore the day before and could barely move so we had got him a pension for the night. Ken has been a very good guy and good company and now he's headed over to Tahiti and Bora Bora to vacation a little with his wife before returning to the real world. Thanks Ken!

So we hauled anchor and moved about fifteen miles down the inside of the lagoon where we just spent the night. An empty beach with palm trees, one old shack back amongst the palms, no boats, no people, very nice. We'll move a little south again today. Life is good. 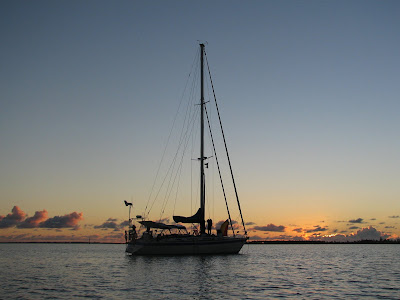 Love to all,
Bill And Janet

Posted by Bill and Janet Wickman at 7:20 PM