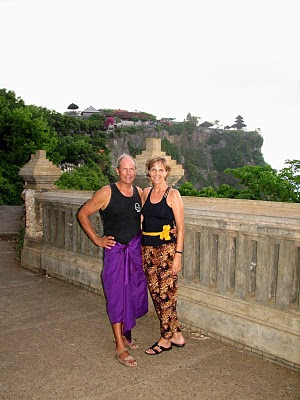 Yesterday we went to the Carre Four mall  near Kuta to check out the provisioning and the A&W they have in the mall. Sure enough, the A&W had that thing I had been craving since leaving home back in March, a decent chocolate shake. Janet and Dave Pryde from SV Baraka had root beer float.  We all left deeply satisfied. Carre Four is a French super market chain. We encountered them in Papeete and they have a great store. The store in Papeete was perhaps better than any super market food store I had seen in the US. The store here in Bali is the heart of a three story shopping mall which is as glitzy and western as anything you might encounter anywhere. It's not quite the caliber of the Papeete store but it's excellent by any standard and the mall itself was a dizzying cultural disconnect. Spotlessly clean.  Brightly lit. Escalators! Baskin Robins! Large format, high definition, flat screen TVs on sale. 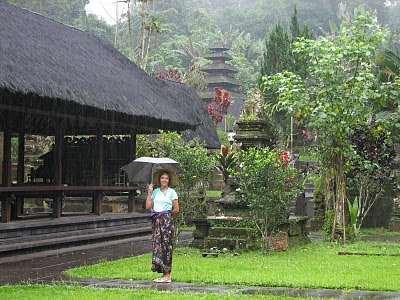 We had come back the night before from a few days on the west coast of Bali staying at a small bungalow resort on an isolated beach. We had no phones, no TV, no radio, and no computer. We had a beautiful black sand beach view and were surrounded by  rice terraces.  The countryside was beautiful. There are volcanic peaks to 10000' and terraced rice fields interspersed with heavy forest. 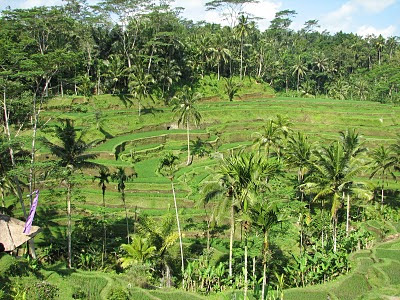 The food was good and inexpensive and we walked the beach and the local village. That village might be typical of how many, if not most,  Balinese still live. The villages are organized around at least three Hindu temples, each with a specific purpose. And each home consists of a stone walled compound with at least one temple within it and separate buildings for living, sleeping, cooking, etc. Many homes are multi-generational and quite large. Each home has a more or less elaborate stone gate in the wall leading off the street and the architecture is often Bali style brick work with stone carved figures. 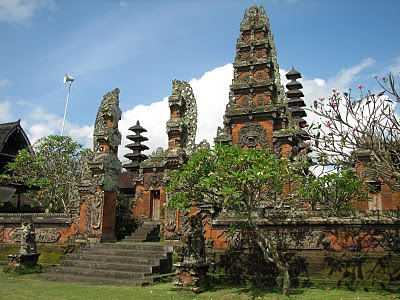 The individual homes look much like temples to the western eye. Especially since they often have stone figures at the gates depicting mythological beasts with a black and white checked or pure yellow sash, Hindu colors,  wrapped around them. There are small market stores in the villages, schools and in general the rural scene is relatively clean and well kept. The rice fields are beautiful.  The temples themselves are lovely and peaceful. The people are at work in the rice paddies or around their homes or very small businesses. The schools are neat and clean and the children are in uniform and very, very cute and eager to be photographed. The streets are quiet but there is occasional moped and even automobile traffic. Certainly some homes are more elaborate and obviously wealthier than others but in general the rural villages we have seen give the impression of peaceful prosperity, stability and a happy people getting on well in life. 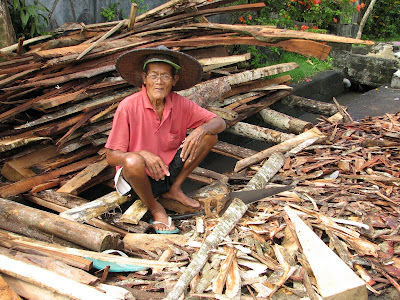 Then there's the tourist scene. We haven't even tried the Kuta bar strip. A few hundred stalls full of drunken Aussie teenagers is not what we're into, sorry. Sanur, just north of us, is more survivable. There are some lovely resorts along the beach, the Bali Hyatt being our favorite, and many, many businesses and restaurants along the road just off the beach. There are good places to eat quite cheaply and a great massage at a very nice spa costs $15 for ninety minutes. The less elaborate massage places usually cost about $8. A massage a day is very doable. This is the first place in the world where the driving habits of the local population have scared me out of driving. And we drove around for three weeks in Egypt without fear. Around the southern part of the island between Nusa Dua, Kuta, Benoa, Denpasar, Sunar, and Ubud the traffic is heavy, the roads are narrow and extremely congested with mopeds and autos and nobody has the faintest idea about what to do next. Traffic is supposed to drive on the left but it's pretty hard to tell sometimes. Four people on a moped is common.

The driving age is supposed to be 16 but I know some of these people are not yet twelve, maybe they're ten,  years old.  Street signs are pretty much nonexistent and no road goes where you think it might.  So we have hired a car and driver to do our serious traveling and we get cabs for local jaunts. The driver, who speaks good English, is a good guy and has a nice air conditioned Toyota, costs us $40 dollars for a full day. Plus he's a very knowledgeable person and a great  tour guide. This seems like a good deal. This area is extremely busy and full of every possible business designed to earn the tourist dollar. And that dollar can go a long ways here. Things are generally a good buy. It's just that we're long bought out and we just don't want much more in the way of tourist stuff even if it is good quality and inexpensive. So we do the tourist scene for it's worth, good cheap massage and good cheap food. Maybe an occasional luxury like evening drinks at the Bali Hyatt. It ain't bad but it isn't why we're here. 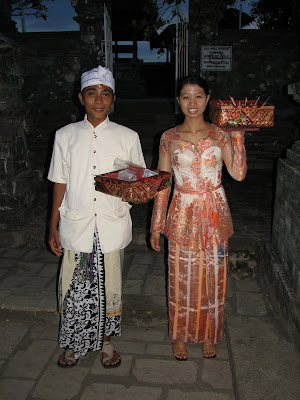 This anchorage at Serangan is a mess. There's more plastic trash in the water than I've ever seen anywhere. It's a muddy, noisy and unattractive place. But it's safe and secure as well. You could ride out a typhoon here with some confidence. There are some yacht services available like drinking water and fuel and the local Warungs (small eating places) are very cheap and have icy cold beer and decent Nasi Gori. There's free wifi!  The people are very nice. We're in the anchorage because it's a good place to leave the boat while we do land travel and the Benoa marina is almost as unpleasant and more expensive. 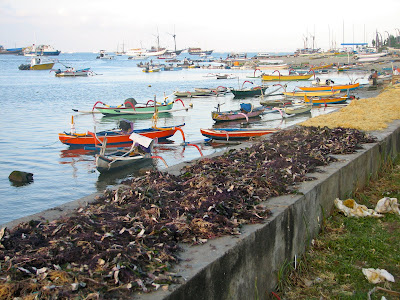 We came down from the Gili Islands in one easy day with the current with us for a change. Fishing outrigger canoes who had spent the night at sea were coming back into Lomboc as we crossed the strait between Lomboc and Bali. Hundreds of them! And they were spectacular under sail. 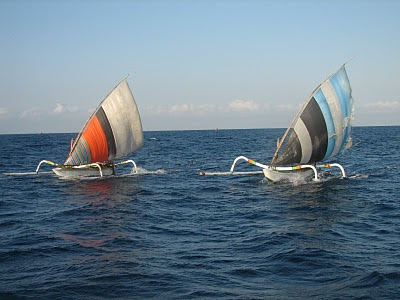 We plan to be here several more days and then either go back to the Gili Islands for a few days or up to the North Lompoc anchorage to let the rally catch up to us. Then over to Lovina Beach on the north side of Bali for the rally events and then leave Bali for Kumi.

I'll update again before we leave Bali. Probably a couple times. This is one of the most interesting, beautiful and complex places we've ever visited.

Love to all,
Bill & Janet
SV Airstream
Posted by Bill and Janet Wickman at 6:41 PM