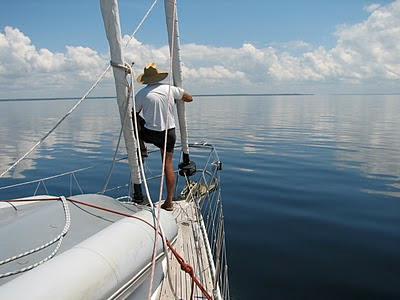 Lovina Beach to Kumai was almost entirely a motor job. Other than a little confused chop leaving Bali the seas were the flattest and the winds the most complete calm we have ever encountered over any significant distance. Since covering the roughly four hundred miles up to Kumai could take an infinite amount of time under sail, we motored. Flat seas are very welcome while motoring and the trip had its pleasant moments. But this is a sailboat. All in all, we've been motoring more than eighty per cent of the time since leaving Kalabahi a couple months ago. There just isn't much wind in this part of the world this time of year. Maybe this "Sail Indonesia" rally should be called, "Motor Indonesia". 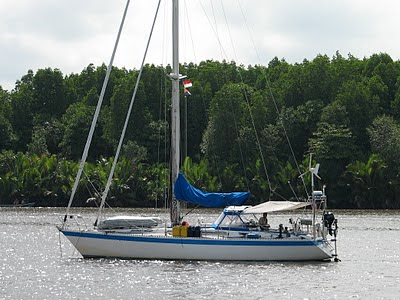 Our almost new autopilot, installed at great expense only six months ago, picked this leg to blow a hydraulic seal. Of course before departing Lovina I had chosen not to install the Hydro Vane rudder because I knew we wouldn't have much wind. So when we did get some nice air early the second morning and I poled out the genoa I was pretty upset when the autopilot couldn't handle the loads and began steering all over the place. A quick check showed the hydraulic reservoir almost empty and and a closer look showed fluid blowing out the joint between the cylinder and the valve block every time it needed to exert any force. Pretty darn infuriating! A new, heavy duty Raymarine hydraulic drive shot to hell in less than six months! So we hand steered for a hundred miles over to the island of Bawean where we knew of a nice anchorage where I could safely install the HydroVane rudder and maybe get some more hydraulic fluid. We went through our supply in a hurry. Bawean proved to be a nice anchorage and we got the vane installed, borrowed a couple quarts of hydraulic fluid from a power boat anchored there (thank you Storey Teller!) and Janet decided we should spend the night because we were beat. A wise move. 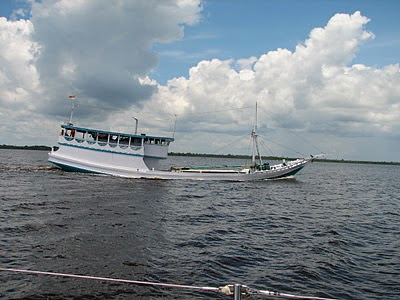 Next morning at first light we were under way in very flat conditions and by occasionally adding hydraulic fluid we were able to keep the auto pilot working well. And that made for a decent trip. Hand steering with minimal crew is every cruisers nightmare. Ya just hate to do it, thus the emphasis on self steering devices, wind vanes and autopilots. We won't be able to replace the hydraulic drive until Singapore but we'll get a bunch more hydraulic fluid here and hopefully we can keep the unit working or sail using the Hydrovane. Come Singapore Raymarine owes us a new drive unit. 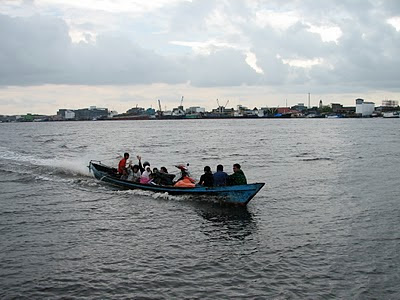 Kumai is very, very interesting and we really haven't done anything yet. We're anchored about ten miles up this jungle river abeam the town. There's the usual Indonesian shipping traffic along the wharfs. There are houses on stilts and hand operated fish traps from the houses and more of the chaotic Indo-town scene. There are also a lot of four or five storey buildings which at first appear to be businesses or housing. On closer inspection you can't tell what their purpose might be. There are hundreds of swallows flying around them constantly. As it turns out they are housing and they are businesses. These buildings are purpose built as huge bird houses. They have thousands of small round holes in the masonry walls. The holes are for the swallows. And the swallows build nests inside. And the nests are harvested and sold to the Chinese to make; you guessed it, BIRDS NEST SOUP! Incredible! And there are more of these buildings under construction. The locals say this is a great business. 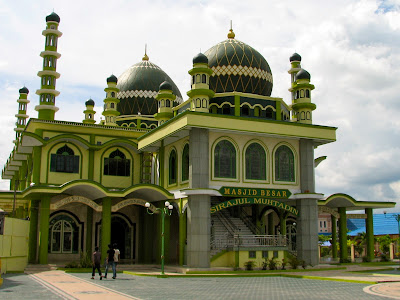 So today we'll get things sorted and tomorrow morning we'll head out on our big plan for Kumai. Nine of us have booked a river boat to spend three days and two nights going up the Sekonyer River to the Leaky Reserve in the Tanjung Putting National Park. We'll have a crew of four; we'll sleep on deck and eat aboard. The purpose will be to view various great apes, especially Orangutans, and other jungle wild life. Borneo! A little jungle trekking with friends. Should be great!
Love to all,
Bill & Janet
SV Airstream
----------
radio email processed by SailMail
for information see: http://www.sailmail.com
Posted by Bill and Janet Wickman at 4:21 PM

i’ve been drinking bird nest soup every night (i only get the homemade kind back at home). the only reason why i drink it is because it’s supposed to be good for complexion.

i’ve been taking the store-bought kind online (e.g. http://www.geocities.jp/hongkong_bird_nest/index_e.htm of famous branded only of course) which is directly mailed from Hong Kong. this would be at a more affordable price.