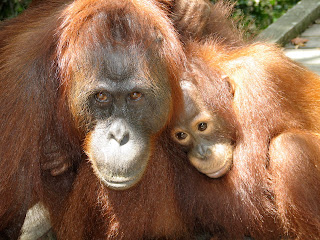 Janet and girls friends delivered ashore, hydraulic fluid secured, belly stuffed up with a good Indonesian breakfast; it's time to relax alone and update the blog. As much as I have enjoyed the very communal and social setting the past few days a little time and space to myself is a pleasure. Since this is still the HF radio world, no internet, I can't send photos but will as soon as we get the capability. 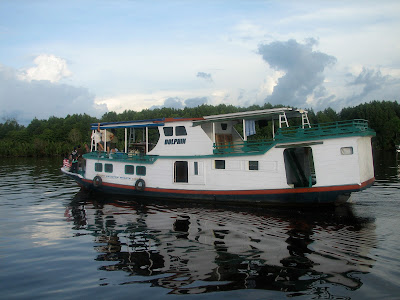 And we have some great photos from a great experience up the river. Nine of us, Steve and Linda from "Linda", Dave and Jan from "Baraka", Glenn, Marilyn and Jaryd from "Tin Soldier" and Janet and I hired a Klotok, a wooden river boat, to go up the river system to the national park camps and research stations to view Orangutangs. We had a crew of six including the captain, two deck hands, two guides and the cook. Harri's yacht service in Kumai made the arrangements and also supplied a boat guy to stay aboard each of our yachts 24/7 while we were gone. The river boat was about sixty feet long and two decked. We ate, slept and spent almost all our time on the upper deck which was covered with an awning and had side curtains we could let down if it started blowing in rain. We'd set up a table and chairs on deck to eat meals. We'd take everything down and bring out mattresses and with mosquito net tents over them to sleep at night. The galley, crew quarters and head were below. We had a rudimentary shower and toilet. They supplied soft drinks and food. We supplied happy hour libations and goodies. Life on board was a little basic but very, very good. For Janet and I together this cost about $300 US total. One of our better deals ever. 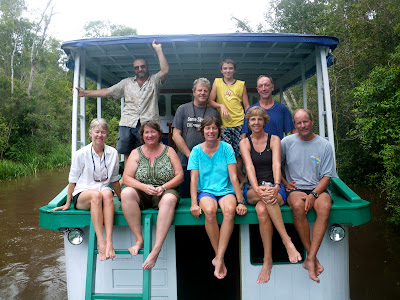 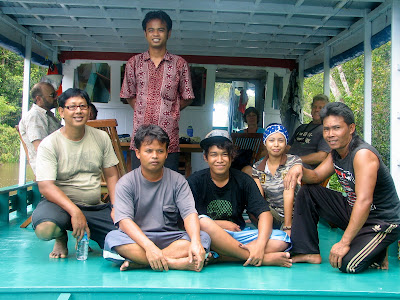 So for three days and two nights we played the 'up the jungle river' game to the hilt. Something about sitting comfortably on deck while the boat glides up a river and the banks get closer together and the vegetation closes in is very relaxing. Along the lower reaches this river system is very tidal and the vegetation is all palms. As we got further upstream the tidal aspect was behind us and the water, which had been brown and muddy, became very black but much clearer and cooler. The vegetation became tropical hardwood forest with hanging vines and ferns and dense undergrowth. 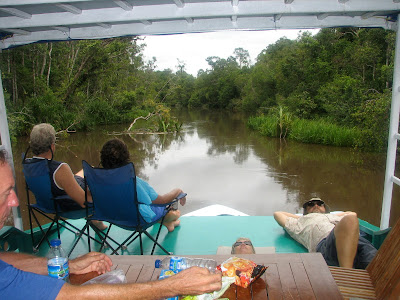 After almost four hours traveling up the river the first morning we came to the Camp Leakey docks and had lunch before walking inland about half a mile to the feeding station. Most of the Orangoutangs at Camp Leakey were rescued from the illegal exotic animal market as youngsters and then re-acclimated and released into the wild. The ones that come to the feeding station to supplement their wild diets are not afraid of humans. The dominant males, and around Camp Leakey this is "Tom", are definitely not impressed by anybody and do darn well what they please. 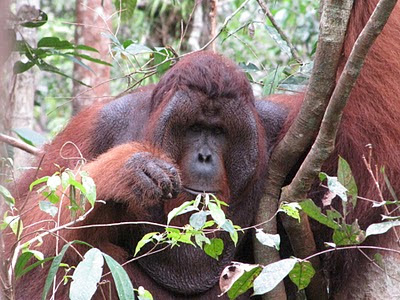 I'm quite sure Tom could tear any human apart, limb by limb. The rangers are afraid of him, say he's a dangerous animal and that, "He hasn't hurt anybody yet, but he will!" So the two o'clock afternoon feeding is quite the occasion this time of year when the native fruits are a little scarce. The females and the youngsters show up swinging down from the trees and stuff themselves with bananas. We observers sit on plank benches near the platform and the Orangs move through us and over us in the trees as they please. They are amazingly strong and graceful. Once in awhile they'll take hold of a human and then go through his or her pockets looking for a special treat. We were warned that a favorite game is to take a tourist back pack about a hundred feet up into a tree and then go through it dropping everything not edible to the ground piece by piece, cameras, sat phones, etc. We were very lucky that each day we were at Camp Leakey "Tom" showed up. 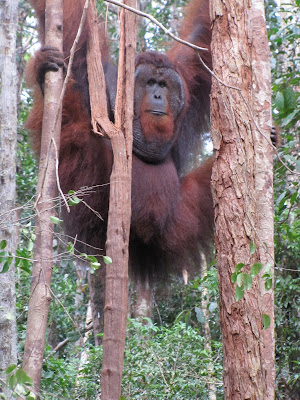 The whole scene changes immediately. The distant trees shake harder. A three hundred pound beastie who is not concerned with stealth is on the move. The other males disappear. The rangers get excited and edgy. Some females generally move into the nearby trees. A few hang around interested in Tom. Everything gets out of the way and Tom goes directly where he wants to go. His head is huge with grotesque cheek pads and a large throat pouch. His hair is six inches long and appears to be nicely combed. It's nearly red except that near his feet it gets almost blond like some grizzlies. He looks you in the eye without concern or much interest and moves quickly past a foot away on the trail. The only time I've had a similar feeling was watching Brown Bears at Brooks Falls at Katmi National Park in Alaska. All you can say is, "WOW", what an experience to be close to them. 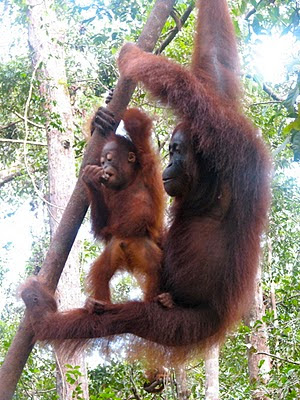 So Tom eats what he wants, chases a couple small females up into the trees, virgins for yet another day, puts on a hellofa show and departs through the trees, pretty cool. We spent three days going to two different camps and doing a little trek through the Borneo jungle. We saw, very close, Gibbons, Long Tailed Macaqs, wild pigs which looked much like our Southwestern Peccaries, and many Orangoutangs. We got a little wet on some rather damp trails. 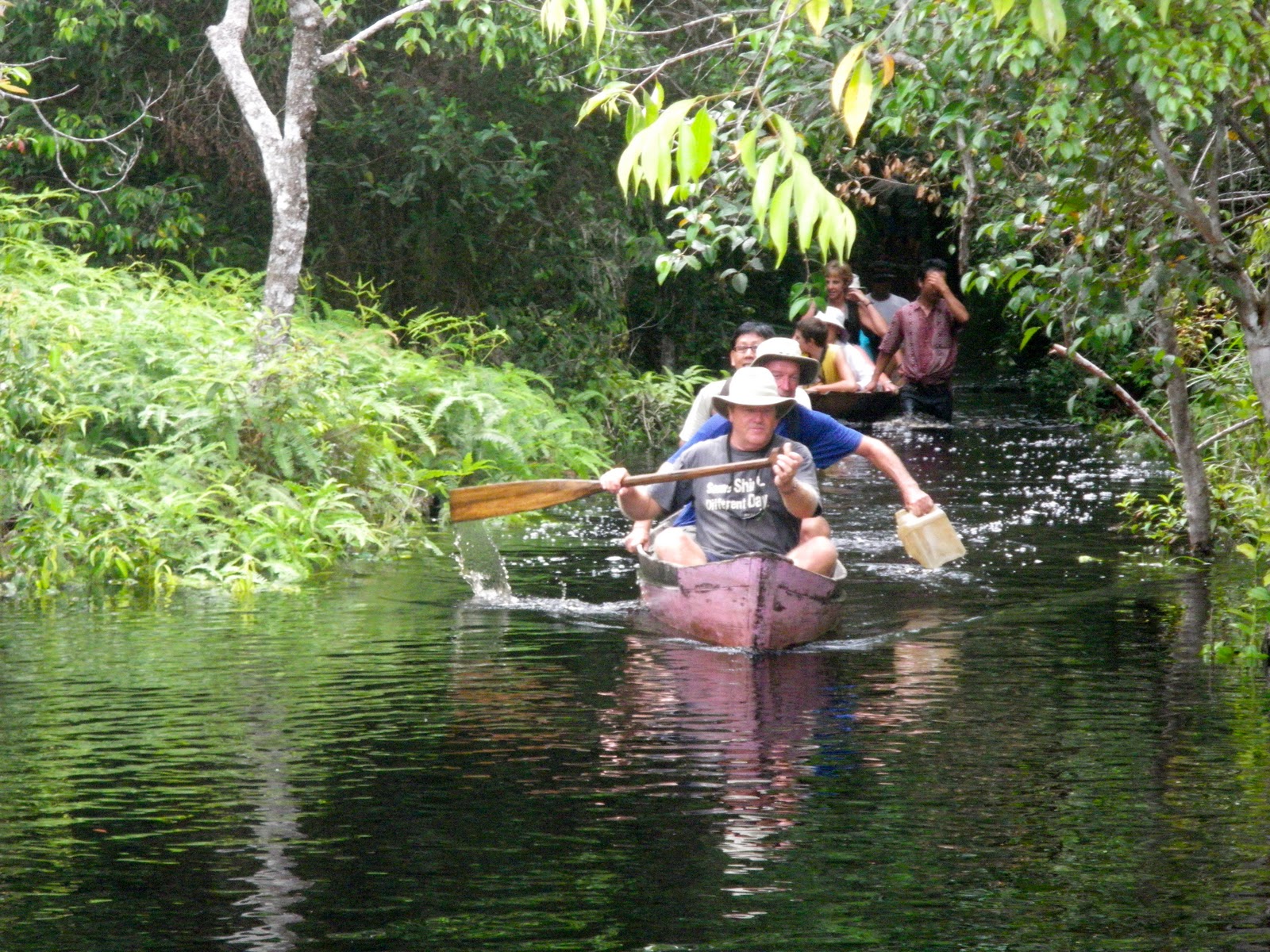 We pulled off a few leaches. We got a few, but not really very many, mosquito bites. We slept, or at least lay there, during incredibly heavy rain, cozy and dry under our mosquito netting and rain awnings. Marilyn drubbed me at scrabble. I got back by beating up on Jaryd at chess. I've got to win when I can. We had good talks and got to know the crew who were very sweet and competent. It was a great trip and an experience which will not be forgotten. Personally I rank it up with viewing the bears at Katmi and some of the hunting we've done in Alaska and Africa as a great outdoor experience. 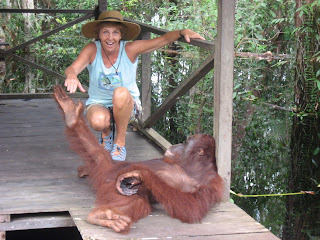 We got back yesterday afternoon and relaxed and had a sundowner with LaPalapa who had arrived that morning. Today Janet and friends are doing an event and lunch with the regency governor and I'm hanging around getting ready to depart, probably, tomorrow morning. It's about 280 nautical miles to the anchorage in Belitung which is considered part of Sumatra, a new regency of Indonesia for us. With a little luck we'll have some wind. One way or another we should be in there in two days. I'll miss the town of Kumai. Some places you like or dislike without really knowing the reason why. I like Kumai and a lot of the good stuff I like about Indonesia seems prominent here; the sweet and friendly people and the general air of good natured industriousness. 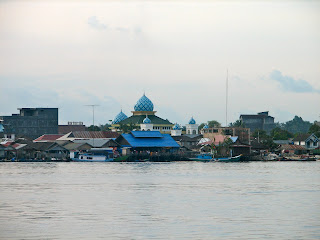 We've got a ways to go yet before we leave this country and enter Singapore but we've all talked a lot about what a great cruising ground Indonesia has been. It'll be hard to top our experiences in Kumai.
Love to all,
Bill & Janet
SV Airstream
----------
radio email processed by SailMail
for information see: http://www.sailmail.com
Posted by Bill and Janet Wickman at 5:20 AM

What an adventure! Thanks for sharing the beautiful pictures and your wonderful description of the experience. Good blog...enjoyed it
Tricia Tighe Eubanks