This is posted from Sydney, Australia, November 7, 2009. Written back in September and couldn't be posted until now.

We've been out of internet access for awhile and probably will be for some time to come. We're working our way north through the islands of Vanuatu having some very good sailing. Presently we're anchored in Lamen Bay at the far Northeast corner of Epi Island. 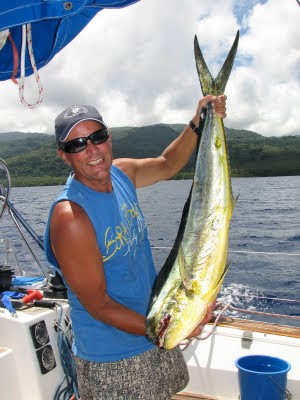 This place is a prosperous village by Vanuatuan standards. There are five other boats here. There's a village 'restaurant', a grass strip airport, and a guy in the village bakes bread. There's a telephone. They have a primary and secondary school which serves much of this part of the island. People generally live in homes built from grass and palm frond mats fashioned into walls with woven palm frond roofs. There's some concrete block construction. The village is very clean and neatly kept. 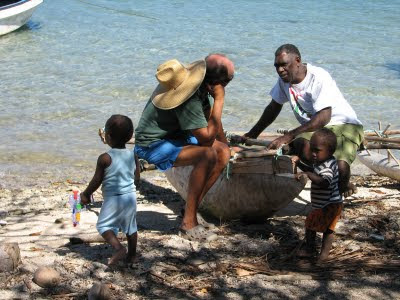 The beaches surrounding the bay are black sand and there are turtles and du dong around us at anchor. The du dong are pretty tame and people can pet them in the water sometimes. We haven't got that close yet. The local dugout canoes often use a clothe or palm frond sail to move down wind. This is the first place we've seen this. These islands are rugged, some of them really mountainous, and every possible shade of green in dense vegetation. There are reefs, of course, but navigation here is not the constant and sometimes nerve wracking reef dodge that is part of most sailing around Fiji. 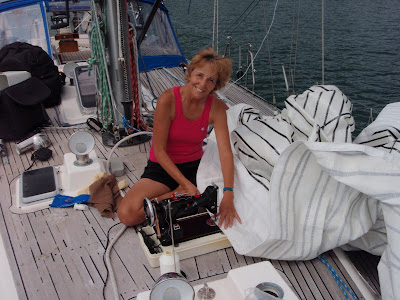 The city of Vila was very nice. Kind of a smaller, nicer Suva. People were sweet and for a city of about thirty thousand there were a lot of good restaurants to choose from, real restaurants where the French influence and the emphasis on good food was obvious. The yachtie social scene was great fun and we had good friends to enjoy being with. Port Vila is one of those places where the 'fleet' comes together as it moves across the Pacific. 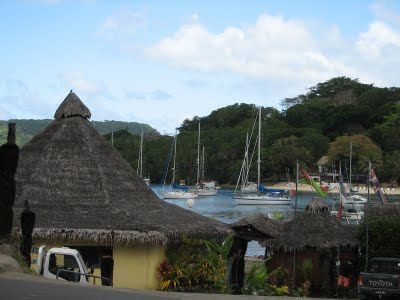 From Vila the boats spread out again, northward to more of Vanuatu and Luganville and then Australia, which is our plan. Or southwest to New Caledonia and then Australia or New Zealand. Or back to Fiji. Or further north into the far western Pacific.

We hauled out the boat at Port Vila Boatyard and fixed the propeller strut problem but we're still getting some vibration off the shaft or the prop at high RPM. We'll just have to deal with that in Australia. 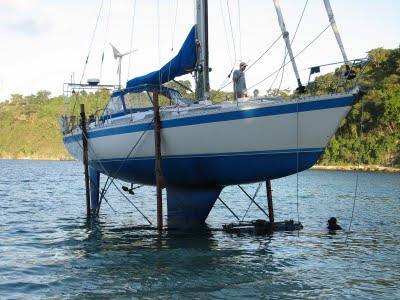 We plan on attending the local church service this morning, Presbyterian we're told. Village services are always very interesting. We'll spend a few more days here and then the 'plan' is east to the Maskelyne group, back northwest to Ambrym and then Pentecost Island and then back east to Espiritu Santo and Luganville. Luganville is the big city again. It's a town of about twelve thousand with things like pizza and internet. The good stuff! 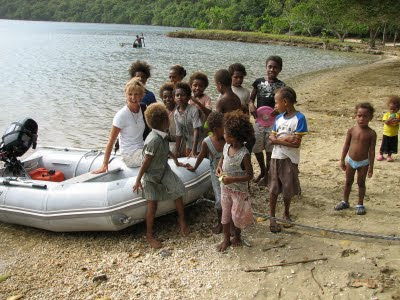 From Luganville we'll join a low key event called the Port2Port rally put on by the Bundaberg Cruising Club in Bundaberg Australia. Since that's our destination this year it seemed a good idea to join up. Their website has the details but there will be forty or fifty boats departing from Luganville, Port Vila and Noumea on the 18th of October, weather permitting of course. From Luganville the voyage is about a thousand miles and should take us about a week. The boats will converge in Bundaberg around the 26th for a few days of play. 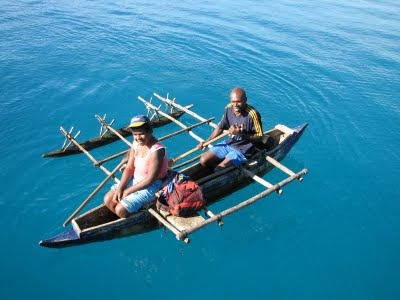 Our plan after arrival is to put the boat on the hard and take the trains down the coast to Sydney and spend some time in that beautiful city. From there it's DL#16 to LAX and AS#2307 to ACV. Home is starting to sound good to me. It always sounds good to Janet. With just a little luck we'll be there about thirty minutes after we leave Sydney on the same day.

We'll post to the blog from Luganville if the internet is working there. We have some great photos to share.

SV Airstream
Posted by Bill and Janet Wickman at 6:20 PM