This is posted November 7, 2009 from Sydney, Australia. Written in early October, it couldn't be posted until now.

Internet coverage is still very spotty and slow at best so we haven't updated the blog and sending many photos is out of the question. We've been anchored off Oyster Island in Peterson Bay on the East side of Espiritu Santo for several days. This is a very lovely and well protected bay. There is a small resort here with wireless and good food. There are a few other boats including some very good friends. We actually felt a couple of the earthquakes while sitting on the boat but there was no damage in this area. Life is good.

To catch up on our travels, we worked our way northwards through the islands on the eastern side of the Vanuatuan archipelago stopping for anchorages on Ambrym, Pentecost and Maewo. At the Ranon anchorage on Ambrym we bought the best Vanuatuan wood carving we've seen. 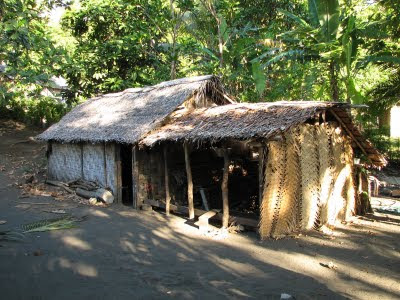 Ambrym is another volcanic island and the volcano is much larger and more dangerous than that on Tanna. This one causes regular evacuations, as it did a few days after we departed. The island is also known as a center of black magic and sorcery, a very real thing on Vanuatu. From Ambrym we had a nice day sail over to Pentecost and Waterfall Bay. 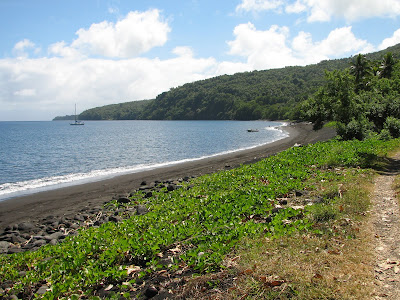 From the anchorage it's a ten minute walk up to the very nice waterfall and a long cool swim. We spent a night there and moved up the island to Loltong Bay which is another very beautiful bay and much better protected than Ranon or Waterfall Bay, both of which are just open beach anchorages. 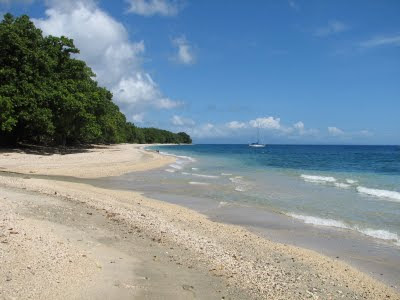 We spent a few days at Loltong. We got to know some of the local folks and the chief and went to the Anglican church service on Sunday morning. A very, very interesting experience. Henry the VIII would never have guessed where his church might lead. From Loltong we moved up one island to Asanvari Bay on Maewo. Asanvari is in the running for the 'all time favorite spot' award. The anchorage is beautiful and well protected. There is a waterfall you can dinghy up to and go swimming in cool fresh water after the daily snorkel in the great visibility of the bay. The village was very friendly and welcoming. The chief has built a 'yacht club' with the help of some Americans and New Zealanders and it actually has a floor and a kitchen. The chief's one surviving son was a chef at several restaurants in Vila and Luganville. The guy really can cook to a high standard if he can scrounge some ingredients from his yachtie customers. Things like Oyster Sauce, and even cream, are not to be found on these islands.

The 'one surviving son' remark was made to lead into one of the more interesting cultural experiences we've had on this trip. Chief Nelson had four sons and three have passed away before reaching thirty. The most recent death occurred just a few weeks ago. The cause; black magic! And they're deadly serious about that kind of thing. So apparently the custom is to have a 100 day mourning and periodic feasts during that time. The fifty day feast was a few days after we arrived and we and the other yachties (three other boats) in the bay were invited to the feast. The feast was held in the village Lamakal. 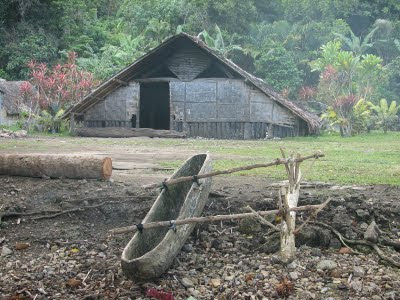 Any village in Vanuatu larger than just a few people has a Lamakal which is generally the largest building in the village. I'll describe the Asanvari Lamakal as a good example. It's about a 100'X40' rectangle with a single ridge pole about twenty feet high and a gently sloping roof which descends equally almost to the ground on both sides of the building. There are walls only a couple feet high on each side but the walls on the ends of the building are full height with only a door sized opening at either end, no door. The roof is palm thatch and the walls are bamboo weave. There are no windows or fireplace chimneys, etc. The floor is uneven packed earth and there are areas where stones are piled to use in cooking. There are a few palm tree trunks on the floor to act as seats but most people sit on the earthen floor. The building is unlit so its dark and it smells rather pleasantly of cooking fires, kava, roasted meat and semi-washed humanity. 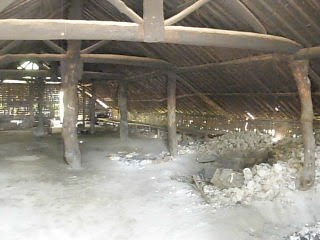 The daily use for the lamakal is as a kind of club where the village men gather to drink kava and socialize. On this occasion large pieces of cow were brought in the day before by boat and over the shoulders of the men and a really big fire was built in a pit in the lamakal. Stones were heated in the pit, the meat was wrapped in palm leaves, put in the pit and covered with more stones and with earth. On feast day we yachties were invited to show about two o'clock in the afternoon. All in all there were probably about sixty men and forty women attending. The women enter through a separate door from the men and sit separately. The men sat around the floor while several young men prepared fresh kava directly from the roots. They take fresh roots and by hand they shred and mash the roots on a wooden tray to extract the juice. The juice is poured through a coconut fiber sieve into a half coconut cup. The chief takes a cup and presents it to an individual and that person drinks the entire cup at once. Tastes like bitter, muddy spit. 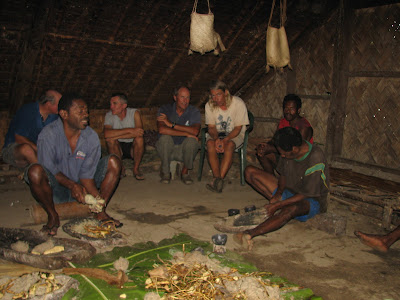 But this is strong stuff and immediately causes numb lips, puts a silly grin on your face and creates a very mellow atmosphere. It's very quiet, everyone is speaking in whispers, if at all, and everyone gets their fill of kava by the time the afternoon is over. Meanwhile the women have been uncovering the meat and preparing palm leaf servers with some taro and manioc. Eventually everyone was presented with the vegetables. 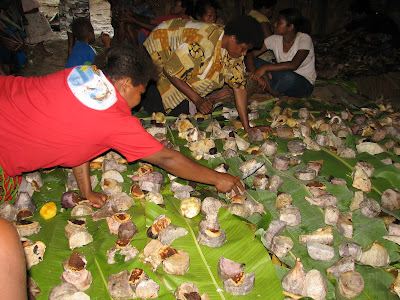 The meat was served in palm leaf baskets in large chunks. We stayed for the kava drinking and then it was politely made known that we should leave so they could have the mourning feast in private. The whole scene is very quiet, very communal and very old. Except for two things we could have been sitting around the lamakal with friends a thousand years ago. Most obvious of course is that everyone is wearing western style shorts, tee shirts or dresses. Less obvious is the cell phone hanging from a wooden hook on the lamakal wall. Asanvari has cell coverage. No electricity, no land line, no services of any kind but cell coverage. Amazing! 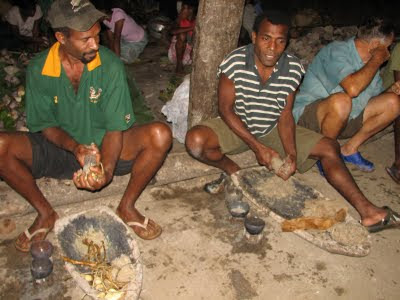 The next evening we arranged for Nixon (the chief's son) to cook for us at the 'yacht club'. He came around to our boats putting together ingredients and created a really good meal of prawns, mixed meat curry, vegetables and salad. He and his wife joined us for the dinner and the conversation put a nice finish on the mourning feast. They know why his brothers died so young. That cause was black magic, probably emanating from enemies on Ambrym. To them this is just a fact like we might think someone died of pancreatic cancer. His brother was buried with a knife in his hands so he could take vengeance in the after life. They said two guys had died on Ambym since the brothers death and they're pretty sure it was his brother at work. When the mourning period is over Nixon and his wife are going to leave the island for a few years to break the cycle of black magic. These are intelligent people who speak at least four languages pretty well and have some understanding of the outside world. But the old beliefs which they live with daily are, in many ways, more influential in their thinking than the education they have received. Very interesting.

From Asanvari it was back to civilization in the form of Luganville and some resort activity. Luganville is a sleepy island town but does have some decent restuarants, a bank with an ATM and decent opportunities to provision. We spent a night moored at Aora Resort and couple nights anchored off Beachfront and then came about twenty miles north to our present location. We've been exploring and doing some very, very interesting scuba diving. Tomorrow we'll move the boat back to Luganville and the Beachfront resort to finish off our diving and prepare to depart for Australia. I'll send out another update before we depart concerning the diving.

Love to all,
Bill & Janet
SV Airstream
Posted by Bill and Janet Wickman at 6:25 PM