This is being posted November 7, 2009 from Sydney, Australia. Written Oct. 19th it couldn't be posted until now.

Internet coverage here is almost zero but we'll see if this can get out.

Tomorrow morning, Monday 19 October, we plan to depart Luganville, Vanuatu for Bundaberg, Australia. By the route we intend to follow which skirts the reef structure north of New Caledonia, north of Chesterfield Reef and south of the Great Barrier Reef this is a voyage of about 1040 nautical miles. It should take about seven days. Forecasts are reasonably good. There should be plenty of wind but wind and seas should be slightly aft the beam for most of the trip so we hope to be not too uncomfortable. 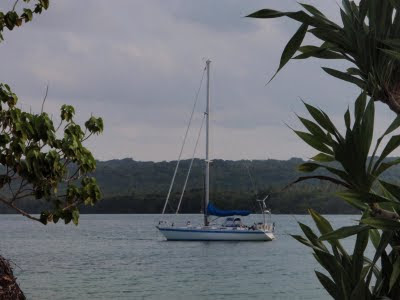 The time spent here on Espiritu Santo has been very, very enjoyable. We've had cruising friends to socialize with and the local people are very sweet. The highlights of the stay have been the 'blue holes' near Oyster Island and diving the wreck of the President Coolidge in the entrance to the channel at Luganville. 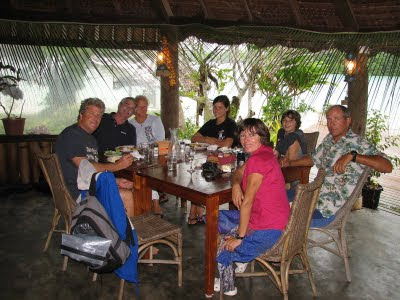 The blue holes are two crystal clear fresh water steams which flow down into the bay near Oyster Island resort. You can dinghy up about a mile to the source of these steams which in each case is a limestone spring about fifty yards in diameter and fifty feet deep emitting a heavy flow of wonderfully cool, clear, fresh water. The mineral components in the water give it a sapphire blue tint. For people who spend their time aboard boats on salt water this in itself is quite wonderful. But what is really cool is the ride up the rivers. 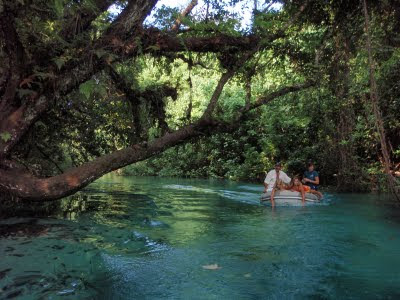 These are deep enough to be easily navigated in dinghies using the motor and they are like jungle tours into Amazonia. The tropical forest grows over the stream and vines hang down into the water and cross above. There are parrots in the trees and it's wonderfully isolated from signs of human occupation. 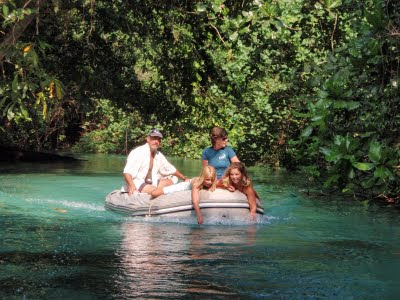 The blue holes themselves have to be the ultimate cruiser swimming hole and at one of them the local folks, who also visit for the same fun we do, have strung some lines from the Banyan trees on shore. You can climb up the trees easily enough about twenty feet (which seems like forty) and then swing wide from an over hanging limb out over the pools and do your favorite fancy drop after a couple swings. 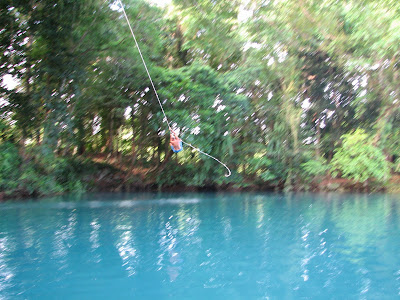 Even Janet, who has an often stated disinclination for heights, couldn't resist that fun. So we made daily visits to the blue holes and came back clean and refreshed, a little rope burned, but happy.

The Coolidge is one of the great wreck dives in the world. She was a major luxury liner built in 1931 for the Dollar LIne (which became American President LInes) to use in the Pacific. She was 650' long and she and her sister ship, the President Hoover, were the fastest and most luxurious ships in the Pacific. When the war started the Hoover was impounded in Japan and the Coolidge was converted into a troop ship. In 1942 with over 5000 troops aboard she struck a US mine at the entrance to the channel into Luganville. The skipper was never given proper information and was eventually exonerated fully. Two men were killed but most went ashore easily enough because the ship was purposely run up onto the reef to keep it afloat. Unfortunately it fell off the reef and sunk in about 220 feet of water about 90 minutes after striking. 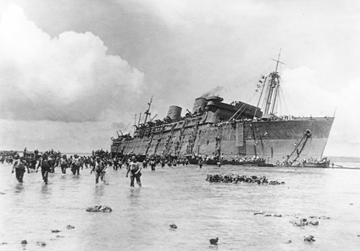 So now the ship, essentially intact, lies on it's port side, bow towards the shore, about fifty yards off the beach. There is every imaginable form of ships gear and military equipment in her holds or around the wreck. I haven't handled live artillery rounds in forty years. They're lying in the gun tubs on the Coolidge just as they were when she went down. The shallowest portion of the bow is about 80 feet below the surface. The name and hailing port on the stern are at 208 feet on our depth gauges. We did six dives each with Aquamarine Diving. They were very professional and good in all respects but this was not diving for beginners. The wreck is a world heritage site and a Vanuatuan National Park so all diving is guided. Aquamarine has one dive master for each two clients. You gear up at the beach, do a briefing, and swim 50-200 yards out to a buoy, depending on where you'll dive that day, and descend to the wreck. 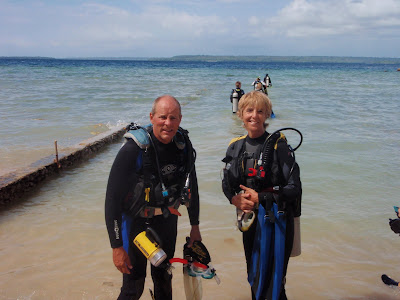 We did one dive a day and that was just fine for us codgers. The first day they show you the bow sections and the promenade deck and they're obviously evaluating the cliental. This gets in about a 100 foot dive. The next dive is to cargo hold one and two and involves a little penetration into the wreck at about 110 feet. Next is a deep penetration to view the symbol of the ship, a porcelain statue of a medieval lady and unicorn which is a substantial penetration at 140 feet. You're supposed to kiss the lady, which I did, and I swear she kissed back. Nitrogen narcosis anyone?

Next is a little trip into the engine rooms and engine control spaces and out through the main saloon at 156 feet.

Dive five is to the aft deck swimming pool at 186 feet. You can try and count the number of tile colors visible. Not so super easy when you're just a little narc'd at 180 feet.

Dive six is the stern, the prop shafts, the rudder and the ships name and then up along the full length of the hull. This is an over 200 foot dive.

Not something I know of any dive operator doing anywhere else with clients. They use the Canadian tables for ascent and most of the dives have three or four decompression stops. It's pretty conservative and our dive computers were always less conservative than their decompression schedules. They have fixed line along the reef as it rises up from the bottom to help control decompression depth and spare tanks at the stops. Everybody is out of air by the time they get to the final stop and those spare bottles look pretty good. On the stern dive we had eight people and four dive masters and several of the clients were buddy breathing off the divemasters by the time we got to the first deco stop at 15 meters. This is not goofing around. The dive masters are Vanuatuans who are all young- middle aged, little, very fit guys who seem to have gills. They don't seem to use air at all. The guy Janet and I did the stern with has been diving the Coolidge for twenty years now, seventeen with Aquamarine, and has over 3500 dives on the Coolidge. Very confidence inspiring. Of course there are many, many different dives on the wreck. We did the standard introduction but some people come back again and again to explore and enjoy. So it was very interesting diving. I did not imagine us ever diving to over 200 feet, Janet at 54 and me nearly 62, and we probably won't do that again. But it was a great experience! 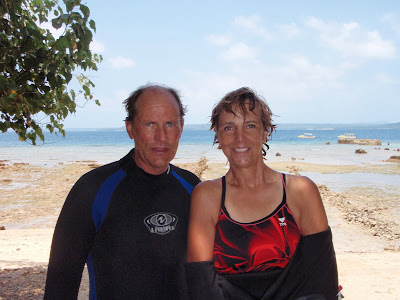 The photos from the Coolidge diving were taken from aquamarine's excellent website at http://www.aquamarinesanto.com/coolidge.html.

Love to all,
Bill & Janet
Posted by Bill and Janet Wickman at 6:27 PM