Still having problems with email speed but hopefully this will get sent soon. We're at Hakamaii Bay on the southwest side of the island of Ua Pou,pronouced WAPOO, we're told. The approaches to this island are the most spectacular I've ever seen. It's only a few miles in extent but it rises to 4000' and is doesn't just rise, it shoots aloft in volcanic spires. The surrounding terrain is mountainous and covered with vegetation but these vertical rocks spires, we assume, are volcanic plugs and I don't say 'old volcanic plugs' because on a geological scale these appear to have happened yesterday. They are sharply pointed symetrical shear rock spires from, in some cases, the sea surface, to up to four thousand feet. Yesterday on the approach we sailed within a few hundred yards of a rock spire which came directly out of the sea to 800-1000'. 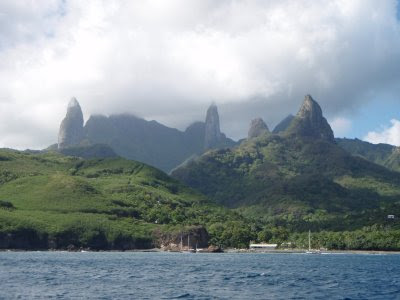 To give you an idea of the isolation of the Marquesas, the third largest town in the whole group is found on Ua Pou and that's a thousand people. The largest is Nuka Hiva at 1800, and we'll be there in a few days. There are about 6000 folks in the entire island group. This village we're anchored off is much smaller but we'll go ashore today and see what's happening and maybe get some fruit. We did get skunked fishing yesterday after fishing the entire 60 mile sail with all rods out. We started out strong fishing but haven't had much luck lately.

Bill Huber and I swam ashore at Hahamaii, it was to rough to bring the dingy in, and found a very nice and prosperous small village. Clean well constructed homes and a lovely church. Had a nice conversation with the local school teacher, mostly in English, and a nice visit in general. We headed back to the boat and moved up the coat a few miles to a lovely anchorage called Hakaotu. All to ourselves, but a Swiss semi-hermit lives in the grove just off the beach. He's spent a few months a year there for the last fourteen years. We're waiting for a great sunset. Tomorrow we'll probably move over to the larger village and get a few provisions, then head for Nuka Hiva.

Love to all,
Bill & Janet, Bill Huber and Ken Stiver

Posted by Bill and Janet Wickman at 7:32 PM