I'm sitting on the concrete wharf in Nuku Hiva. The local 'yacht service' has set up wifi. But it's the slowest wifi.... 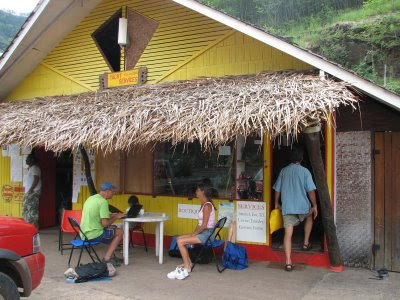 It's a cool and sweet morning and we just did the market which starts at 0530 and is over by 0700. In the Marquesas things happen early or late. It's more comfortable that way. we had heard some negative vibs about Nuku Hiva, it being the metropolis of the Marquesas, 1800 people after all, but it is a lovely place with a nice anchorage. There are about 50 boats here from all over the world including a Swan 100' and what is probably a 250' three masted schooner out of Southhampton. There's a very friendly cruising community and we had dinner with folks from several other boats last night. This is where Herman Melville jumped ship off a whaler in 1842 and ended up with the 'dread' Typee for several months. Of course the Typee treated him very, very well and he had a great time. For some reason he was desperate to go home but it was probably the best time he ever had...read 'Typee' for a very interesting account of the Marquesas and just a general good read.

Bill Huber will leave us to head home tomorrow. We're going out to a nice place for a little dinner tonight. There are few places to eat and Air tahiti owns a small resort here which is supposed to have a very good restaurant. Probably the 12th we'll leave the Marquesas (it hurts just write that) and head for the Tuamotus and the island of Fakarava for a landfall. Should be a four day passage.

I'm still working on getting the onboard email up to speed but things are improving.

Posted by Bill and Janet Wickman at 7:31 PM