Obviously we're back in email contact. For any HF geeks I will say the apparent fix was pretty simple. A ferrite choke was about a half inch off the modem end of the cable to the computer. Didn't seem significant but I snugged it up and secured it with a cable tie and, amazing, it began working just fine. Apparently enough stray RF was getting into the cable to screw the works! Lesson learned, I hope. 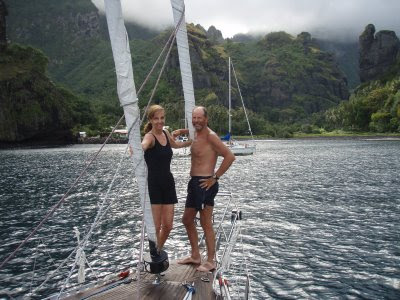 We arrived at Fatu Hiva in early dawn of the 29th. It was a classic land fall with tropical squalls around but a great sunrise and this mountainous, precipitous, lushly green island right where it was supposed to be. Although that's no great trick with GPS it was still nice to see it was really there. Fatu Hiva is spectacular and we had a nice anchorage with a few other boats. There is a small village with no facilities but we did some hiking and Janet did some trading and one of the local families has dinner available if she can round up more than four people. I've said that Princess Louisa inlet in British Columbia is the most beautiful place I've seen. Fatu Hiva is good competition. It's not as high but it's so violently vertical and there is every shade of green imaginable. It is an incredible place. Since we were technically illegal we only spent a couple days, the local gendareme gives boats a beady stare and three days to go check in, and we headed for Hiva Oa. We're at anchor there now, a short thirty mile sail from Fatu Hiva. 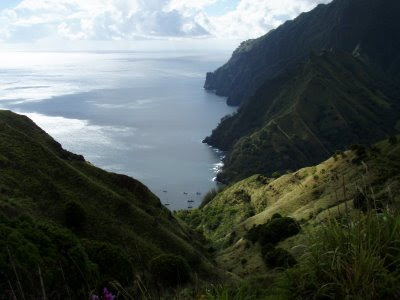 Hiva Oa is beautiful but civilized with about 1800 people and stores and tourist facilities. We completed the check in process after some long waits at the bank for bond and the post office for a stamp. Everyone was nice but everything is very expensive so we got some provisions, took fresh water showers, washed clothes and today we'll get fuel and head over to the island of Tahuata (very short sail) and anchor out in what are supposed to be some very beautiful and quiet places for a few days. 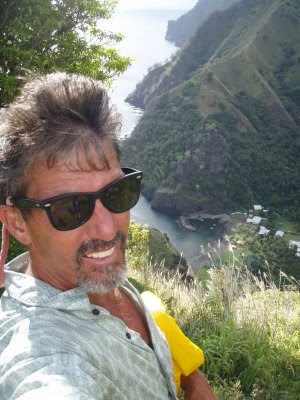 My apologies for the long silence but hopefully that problem is solved. We love to get emails!

All the best,
Bill & Janet, Bill Huber and Ken Stiver

PS: Anyone interested in our position should NOW USE OUR SSB CALL SIGN OF "WDD7160" on shiptrak or Pangolin websites. That's how we'll be sending positions reports again.

We completed our fueling and motored over to Tahuata. Had a nice fish on for a few minutes but it broke off and it looked like the line was tooth damaged. I'm going to start using nothing but wire leader. We're presently anchored in an unnamed bay on the northwest corner of Tahuata. I think it's the best spot I've ever been lucky enough to drop the hook. 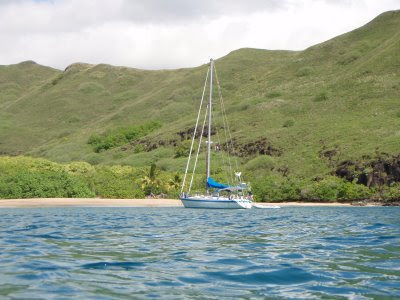 We're in about twenty feet with good holding in sand. The bay is just big enough for one boat to swing well. There's a perfect sand beach without a foot print upon it. We have a nice breeze to keep the ninety degree day quiet comfortable. I think this is why we did a twenty four day passage after years of preparation. I hope there are many like this anchorage to come. We've been snorkeling, relaxing, snoozing and I think dinner and a Hinano beer may be in the near offing.

PS: Despite the heavenly present I can't help but be curious about the situation at NWA. Could you guys give us the latest details?

Posted by Bill and Janet Wickman at 7:34 PM