Enroute to the Tuamotus

Today was one the most beautiful days at sea I've ever experienced. It was light air, never more than ten knots, but the direction was good, a close reach, with a very gentle following swell of one to two feet. There were scattered tropical fair weather cumulus and the ocean is a deepest, clearest sapphire blue. It's after midnight and conditions are still wonderful. The boat is moving at four knots with six knots of breeze on a close reach. There's about a three quarter moon and we've got twenty three miles to go to the pass entering Fakarava. At this rate we'll heave to for a couple hours to wait for the slack tide which is supposed to be at 0717. Tidal calculations around here are notoriously inaccurate. So it's been a beautiful day if a little slow. Still we covered over one hundred miles and this passage will be a little faster than planned due to the very good first three days. If every day at sea were like today there would be a lot more people out here. 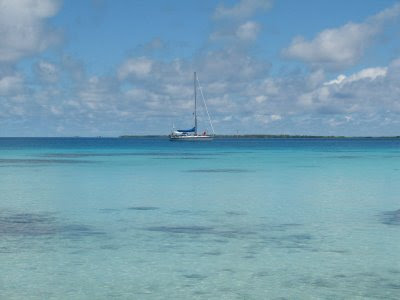 This is a very isolated area. Fakarava is the second largest atoll in the Tuamotus but still has only seven hundred people on an island more than thirty miles long and fifteen miles wide. Of course most of that is interior lagoon with very low lying land islands (motos) only on three sides. The rest is coral reef. We have three large atolls within 25 miles right now and there is not a light in sight. You'd think we were in the middle of a long passage. This is called the 'dangerous archipelago' and used to be avoided because the hazards could not be seen until a vessel was to close. Now with radar and GPS it's an area regularly visited but we're still being very careful. I won't be entering the very tidal pass until the tide is right in daylight. to be continued....

We hove to as planned and got a couple hours sleep before entering the pass without incident, perfectly timed just as the tide books predicted, which bodes well for other island entrances in the area. This is a lovely quiet anchorage with a few other boats. There is a dive operation and the first thing we did was run into them and make arrangements to drift dive the passes tomorrow. We went for a walk in 'town' and got oriented. We'll spend a couple days anchored here before moving off into, hopefully, uninhabited areas of this atoll. We're going to do a little dive off the boat for practice this afternoon. 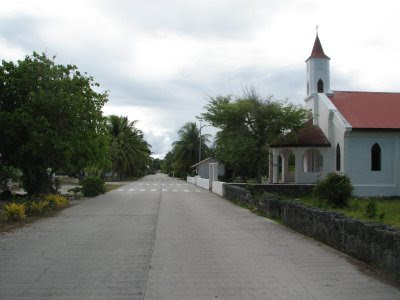 Love to all,
Bill, Janet and Kens

Posted by Bill and Janet Wickman at 7:26 PM