We're enroute from Nuku Hiva to an island in the Tuamotus called Fakarava. Supposed to be great diving. We left Bill Huber to catch his plane home. He'll probably be in the US by the time you read this. Bill was a great shipmate and we'll miss him. 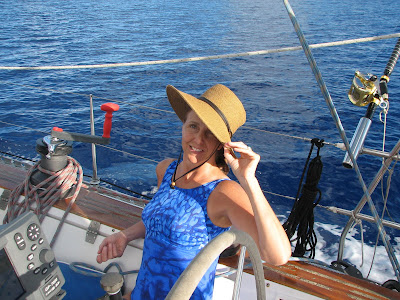 I really loved the Marquesas and was very sad to leave. I'd like to come back someday, maybe as a rich tourist. If you want a great place to visit, go now, it's going to change fast. The Tuamotus are totally different from the Marquesas. They're true atolls. Very low lying beachy places with large internal lagoons and, as I said, great diving. They're very thinly populated. Farakava, where we plan to go first, does have a village and even air service to Papeete. Toau, where we'll go next unless plans change, has about forty people part of the year.

We're having great trade wind sailing. Winds are out of the east at 15-20 knots. It's about 85 degrees with fair weather cumulous and an easterly swell of about five feet. We've got a reef in the main, the genoa partially furled and the stay'sl set. The Hydrovane (wind self steering device) is steering and we barely ever touch it, works great. We're doing hull speed easily (7.5 knots). If this keeps up we'll have to wait around for the tide to change to get through the reef pass into Fakarava! 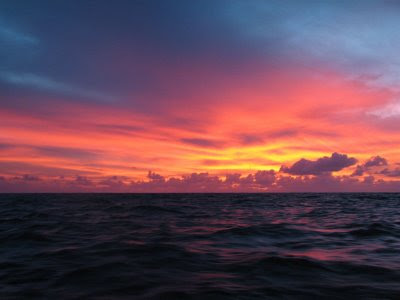 To those NWA guys who have inquired about HF frequencies, the Pacific Seafarers HAM net is on 14300MHZ at 0300Z for the warm up and offically begins at 0330Z. This is a HAM net but you can listen in and a quick call from an aircraft would not be too much trouble. By 0400Z we should be on 6227MHZ which is the coconut milk run SSB net and calls would belcomed on that net from aircraft I believe.

Thanks to all the folks kind enough to send us emails!

All the best,
Bill, Janet and Ken

Posted by Bill and Janet Wickman at 7:27 PM