We’re at Harbour Village Marina in Bonaire as planned. The voyage went well, mostly, more about that later. We arrived the 29th and got nicely situated. The marina is small by European standards, about eighty slips, but all amenities are available and its rather posh. What’s more there is that almost indefinable thing we’ve been missing so long, cruiser camaraderie! We have a nice Australian boat from Adelaide beside us. We ran into Frank from SY Morning LIght yesterday at the bar. We cruised with him in Rarotonga and several places across the Pacific and SE Asia. There are several good American boats and the social atmosphere is somehow different in a very pleasant manner. People here are sailors and divers not just charterers, vacationers and site seeing types and there’s some of that sense of shared adventure. Very nice
St. Lucia had been quite sweet. Rodney Bay Marina had become a little like home so it was with some sadness that we left and motored a few miles down the coast to Marigot Bay and picked up a mooring. Marigot Bay is a lovely very small natural bay surrounded by high rainforest covered hills. A perfect hurricane hole. Its well developed ashore but in a pretty picturesque way and there are good services. We checked out of St. Lucia there, had a nice dinner at Doolittle’s restaurant and left the next morning for the pitons.
We had planned to spend the night at a place called The Hummingbird where they were supposed to have moorings, etc, etc. But after finding no moorings and since they wouldn’t answer VHF and since when I got ahold of them by cell phone they couldn’t supply any info about securing our boat for the night, stuff we thought we had sorted out with them the day before, we cancelled and headed a little further south to the moorings between the pitons.

And that turned out to be very special. It was one of the most dramatically beautiful anchorages we’ve had in a long time, right up there with Ua Pou or Vatu Hiva in the Marquesas or some of the Society Island anchorages. Plus ashore there is one resort called Sugar Beach. This has the reputation of being the finest  and most expensive place on St. Lucia. It certainly is beautiful. No high rise monstrosity but a number of off-white victorian ginger bread villas set into the rain forest above a gorgeous beach.
Very quiet and lovely. We went in for drinks and dinner, paid the price, and it was worth every penny. Next morning we snorkeled off the boat in decent coral, relaxed, enjoyed the spectacular view and then headed out for Bonaire.

The passage is roughly four hundred and fifty miles and almost dead downwind in the prevailing trades. We had fifteen to twenty knots most of the trip and sailed with the genoa set alone being no hurry and just wanting as pleasant a trip as possible.
There was some roll but not like the Atlantic crossing. We had a little night time rain but none of the Atlantic squalls. And about half way across the starboard lower shroud broke with a rather shocking metallic BANG! hmmmm…..I knew I should have put another turn or two on those lower turn buckles before leaving Grand Canary. There was definitely some play in the leeward lowers during the roll but it didn’t seem excessive. Well, continuous rod standing rigging is great stuff but it doesn’t like  looseness  and that was proof. We consulted with a rigger in Bonaire by sat phone and he confirmed there was little chance of the rest of the rig coming down given our point of sail and conditions. I set up spinnaker halyards to the toe rails port and starboard. We pressed on under genoa alone and as I half way expected the port side shroud also failed about twelve hours out. So we came in without further incident.

I took down the shrouds and this rigger, who seems pretty competent, thinks we can get new material from Selden (the manufacturer) without difficulty. He didn’t say “without cost” so it will probably be an expensive lesson. The new lowers will never be in play, I promise.

So we’ve started exploring Bonaire. We got established at a dive operation and have done four dives in the last couple days. We’ve got a car, actually a pickup because that’s what everybody gets to haul around their dive gear, tanks, etc. The atmosphere is friendly and laid back. The island officially calls itself “The Divers Paradise” and most everything is oriented towards that activity. What we’ve seen so far is lovely water with about 100 feet visibility, plenty of aquatic life, including by far the biggest Green Moray eel (whatta beast!)  we’ve ever seen and decent coral. 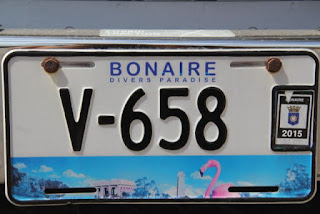 We’re going to do a lot more diving in the next six weeks and then we’ll have a real opinion. This place is touted as one of the three best diving destinations in the world. I have my doubts about that, we are quite spoiled and jaded folks. But I’m sure we’ll have a very good time. Stay tuned for the full report.

Love to all,
Bill & Janet
Posted by Bill and Janet Wickman at 8:32 AM

Thanks for the flashback memories of our honeymoon in st.lucia-safe travels ahead!!

I'm starting to think you two have retirement all figured out !! Keep the stories coming.

Happy to hear about your safe passages and have fun adventures diving! My crew would love to dive with you. Enjoy!

In Thessaloniki we have 5 to 17 celsious. In your photos you have only summer clothes. The hot weather and the beatuful beaches are the best HOLIDAYS!!! Have calm seas...

Its nice to know that the Caribbean is still nice and we have something to look forward to when we finally cross the Atlantic. This year we'll stay in Italy and Spain.... got a 1 year visa for Italy which is going to be really helpful. Love....