St. Lucia is quite nice. Rather more civilized and developed than I had anticipated. That’s good in that one wants all the services and amenities and bad in that there’s little sense of adventure in being here. The west side of the island, especially the northwest where we are,  is the most populated area and most of the 185,000 folks on St. Lucia live on the west, leeward side. The east is exposed to the Atlantic swell and weather. The interior is very rugged and mostly rain forest.
Rodney Bay Marina has proven to be a good place that’s well managed and secure. The usual yacht services are available, there’s a good chandlery and several decent restaurants including Thai, Japanese and Indian. People are friendly and the ‘freelancers’ wandering the docks looking for jobs to do are watched over by marina security. We’ve used two of these guys and one was quite good, the other not so good. Things work on “island time” which can mean about anything but almost never “now”.
I’ve been here two weeks and Janet a week. Most of my time has been devoted to boat jobs. OK, I’ll admit it, that’s probably less than half of any given day. But after a major voyage there’s bound to be a little stuff  that needs to be done. In the days of wooden ships and iron men a good skipper prided himself on the appearance and condition of the ship entering port. That hasn’t changed completely but the crew is onboard for fun and adventure and the cat of nine tails has gone out of fashion. Here’s a short list of the first things I did or had done . And there’s easily three times this much that I’ve never bothered to list: 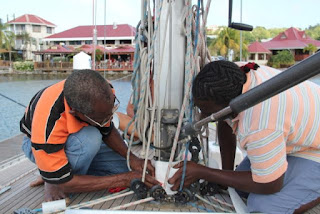 Like anywhere in our experience the quality of the people we have worked with varies a little. Most have been fine and a couple really very good and maybe a couple not so good.

But we have had a little fun. Just having Janet here rather than my smelly old crew is great fun for me. We have our five PM  ‘beer o’clock’ on board and then prowl the marina haunts looking for conversation and  for whatever place to feed ourselves if boat food doesn’t sound good.
Yesterday we did our first pleasure diving in almost five years. I’ve been doing an occasional boat fix type dive but the Med diving wasn’t much and diving SE Asia, where we were at least, was not worth doing. Of course we’ve been spoiled. So we made arrangements to spend a two dive day with Dive St. Lucia which was a very clean and modern operation very near the marina.

We did a little re-familiarization work in the pool prior to the dives and then headed out for a day on one of their boats. The diving was good, not great. We did a wreck dive to about sixty-five feet. Visibility was maybe 60-70 feet and the usual tropical life was present, nice but nothing new to see and the wreck was sunk as a dive sight  twenty years ago.

Dive two was a long swim along the shore reef at about forty feet but it was nicer in that there were a lot of fish and a lot of variety. Swam with a  Hawksbill turtle. Lots of barrel sponges. Visibility about the same. So it was a fun day with an excellent dive operation. There were only six of us in our group with one dive master. There were some other snorkelers on board.  The boat, the staff, the food on board and the operation in general was very good. We’d recommend Dive St. Lucia

So it was a start back into diving. Bonaire is the place we’re looking forward to and its touted as one of the three best dive locations in the world. The plan now is to leave Rodney Bay Marina Wednesday and head down to Marigot Bay for at least a night. Then down to the southeast of the island and spend a night or two off the “pitons” and then head off to Bonaire. Bonaire is about 450 nautical miles and should be about a three day passage. We have reason to hope for a lovely down wind sail WITHOUT THE ROLL we found for eighteen days in the Atlantic. Wish us luck!

Posted by Bill and Janet Wickman at 5:57 AM

Hi, Janet and Bill: nice to hear from You. Enjoy your time..
Good luck in your trip to Bonaire.
Sonja and Agustin.

Enjoy our old stomping grounds! Spent a hurricane in Bonaire and environs. Will look forward to seeing the many changes we are sure transpired since 25 years ago!!

All sounds fun down there...hard to believe it was almost 38 years ago I made a living( or tried to anyway !) flying the mail, etc. In the islands !! Enjoy😄. charlie