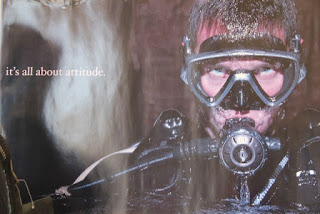 If you’ve ever seen the great WWII submarine movie “Run Silent, Run Deep” you’ll recognize Clark Gable’s iconic command, “Dive, dive dive!”.  If you haven’t seen the movie you should, that and “Das Boot” being the greatest sub movies ever made and great movies in themselves.

That’s also pretty much what we’ve been doing on Bonaire the past three weeks. Sure enough we’ve done the usual boat stuff. I’ve changed engine oil and filters. The outboard is finally starting reliably and running very well. The lower shroud parts are supposed to be shipped the 1st and we’re ready to do that replacement. The dinghy leak has been fixed….apparently. We’ve explored much of the island and spent more money than planned upgrading dive gear, etc, etc.
But it seems every day is pretty much organized around diving somewhere. The entire leeward side of the island (the west side) is one long coral reef and in some places its a double reef. There are a couple marine reserves but all the rest is available for a good to great dive and there are over one hundred categorized entree points. You can just drive the coastal road and shore dive, you can dinghy out to buoys anchored at the known sites or you can do boat dives. We’ve done twenty six dives here as of yesterday. We don’t make any effort to do multiple dive days. A few of those dives have been boat dives but most have been shore entries. The trades have been blowing exceptionally hard the past couple weeks and that has churned things up. Visibility in the water has probably been less than 100 feet but that has begun to improve as the wind is backing off a little. As an example yesterday we dove a site called Karpata at the northern end of the central west coast. Entry and exit were a little rough due to wave action but there was little current and the visibility was at least 100 feet.
The reef drops off almost immediately from shore  to beyond scuba depth. Went went down to 130 feet along a gorgeous wall of sea fans, mixed soft and hard coral with a wide variety of tropical fish. We worked our way back up along the wall through coral canyons and then eventually into shallower water and back to our entry point. It was a great dive with the only missing element being no really large fish or turtles. We do some variation of that kind of dive somewhere almost every day. We’ve been getting our tank fills and doing a few boat dives with WannaDive which is dive operation near the marina. We would highly recommend them as a very friendly, competent and laid back operation. When my niece Marissa and her friend Olivia were with us they got their open water certifications with WannaDive and were happy with the program. They let us keep our gear in their dive rooms and we just pick up our tanks and gear and go.

We been socializing and diving with Jerry Dahl who has become a good friend and dive buddy. His sweetie Gwen left a few days ago but he’ll be here a few more days on his boat ‘Castaway’ until heading for Curacao with a friend as crew. Jerry and I have an amazing number of things in common starting with being Iowans the same age and it goes on and on. Jerry has been coming to Bonaire diving since 1972!
So the next big event is a family visit from my niece Julie, her husband Russ and their two boys Owen and Jack, ages six and four. That will be a kick! If we survive the week we’ll get this boat up and ready to move onto Cartagena about the middle of April.

We got our scuba certifications in Bonaire in 1999 and just loved the place. Gee - visibility dropped below 100 ft, what a shame! Just keep enjoying yourselves! But stay ever vigilant as piracy in on upswing off Venezuela. We also loved Cartagena but prepare for rough sailing on the way there. All our best, Nancy & Chris sv AMULET

Any doubloons yet? A little something to pay for your hobbies?
Cheers from the Argonaut/Drifters crew