Bonaire, Getting To Know You

We’ve been in Bonaire two weeks now and are starting to feel like old hands. We can drive around ‘town’ without getting lost in the roundabouts and we can find decent ice cream when needed. There are more than a hundred recognized dive sites around the island and we’ve done ten so far. Actually you can fall into the water about anywhere on the leeward side of the island and have a good tropical dive experience.
People are laid back and friendly and the racial ‘edge’ found many places in the eastern Caribbean doesn’t seem to exist here. The Dutch influence is strong and positive. Island time is still a factor but not to the point where nothing gets accomplished. The rigger working to solve our shroud problem seems to be a good guy and I believe we’ve finally got our pesky outboard starting problem solved at last. With a little luck things will continue to go very well
We had a really nice visit from my great niece Marissa and her roommate/teammate Olivia. The girls are freshmen at Creighton University and soccer players for the university team. They flew in and spent eight days with us on the boat. 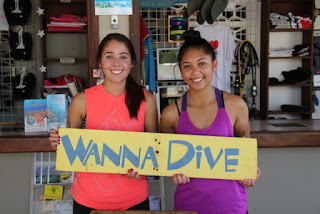 They got scuba certified and went diving with us. They took wind surfing lessons. They did the usual girls stuff and some shopping. They’re very nice, smart and athletic girls and it was very interesting for us ‘old’ folks having some teenagers around for a change.
So we’ve been diving with a nearby dive shop called “Wannadive” and enjoying the local scene. They do our tank fills and we keep gear at their shop. Our boat dives have been with them. They’re very nice.
But people at home say that we’re on another “island paradise”. Hmmm…..when I look at Bonaire I see  an arid and harsh place where cactus and Iguanas compete with the wild donkeys for what little sustenance is provided. There is almost no fresh water and all the water used in the island’s system is reverse osmosis sea water. What I think of is what an old ship wrecked mariner would have thought having washed up ashore. This was a little bit of hell for those people and for the slaves who were brought in to work the salt ponds. Today the main sources of income are tourism, mostly dive tourism, and salt. Cargill owns the salt production facilities that occupy most of the southern third of the island. There are dive shops on every corner and they seem quite good. There are modern super markets and good restaurants. People are friendly and competent
Beneath the surface is a rich and varied tropical ecosystem that is well protected by the island government and seems quite healthy. Typically there’s a shore ledge that extends out to 20-50 yards of sandy bottom with some soft corals or stag horn coral and then the reef drops off to maybe 140 feet of depth in a nice wall. The walls are covered with a good variety of coral and there are supposed to be over 400 hundred species of fish. Visibility is 70-100 feet and water temps are about 80F. Its good, very good, tropical diving. Bonaire is touted as being one of the three best dive sites in the world. Well….maybe…..that jury is still out as far as we’re concerned. I still think of the walls north of Little Cayman, the Red Sea south of Hurghada and a bunch of places in the Pacific and Indian Ocean as perhaps better. But as far as the number of sites available, shall we say the square miles of reef that are easily accessible,  well maybe that’s an argument to be made. 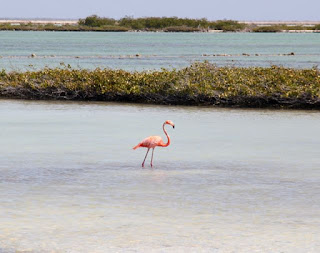 In the meantime life is good. Our rental wreck pickup is running better. The previous renter had tried to run it on diesel and it was still recovering but the rental outfit assured me it would be OK and a tank of gas later that seems to be the case. The roads are very rough and tough.
We’ll have more family down in a couple weeks and that will be great fun. All is well. We’re looking forward to the next month in Bonaire.

Love and kisses,
Bill & Janet
SV Airstream
Posted by Bill and Janet Wickman at 6:07 AM

You two are champs of retirement living -keep enjoying it. Seoul, Korea says hello to you Bill- my first layover there downtown. Cheers !

Where is this place? Realy nice island and very good weather. Enjoy it and have calm seas.