Hello to Everyone,
Costa Blanca, Costa del Sol, Granada, famous names in the world of travel. We're in Gibraltar after having a little sample of what those places have to offer. And Gibraltar is very nice if a little more crowded with tourists than we expected. It seems the "season' is approaching full swing. And we did our share of tourist stuff today.

We wandered the streets of the "town", the oldest part of the city. We took the cable car to the top of the rock, took many photos and played with the famous apes. These guys were a lot nicer than their cousins in Bali. We walked back down in the sun and after fifteen hundred feet of steps down the old knees were a tad shaky. We like Gibraltar.

Getting here from the point of our last blog update in Alicante had its moments of boredom and frustration, no shear terror, happily. Our luxury night at the Hospes Amerigo in Alicante proved to be just as nice as we had hoped and if that hotel is a fair example of what the Spanish 'Hospes' chain of hotels has to offer they are very good, if a little on the expensive side. We left Alicante with a very positive feeling about the city and the marina.

Cartagena was the next logical stop down the coast for a sailboat with no wind, another  nice, very historic Spanish coastal city. I haven't been going into the history of these places much because most of it is the same old thing. Prehistoric man, Greeks, Phoenicians, Carthaginians, Romans, Visigoths, Moors, religious wars, Napolianic wars, modern civil wars, world wars, etc, etc. How the human race manages to continue is sometimes beyond me. Cartagena has seen more of that then most places but still manages to be a very friendly and civilized city that was not over run with mass tourism. The city has one of the nicest pedestrian areas of town we've seen with lovely well preserved architecture.

From Cartagena the next stop was Garrucha about sixty miles down the coast. Garrucha proved to be no more than a place to stop for the night. The town has nothing to offer but the worst form of tourist ticky tacky and the 'new' marina should be considered the 'almost finished but probably never completely finished' marina. It was OK for a calm night or winds from the north but I wouldn't want to be in there with a southerly blowing. The 'old' marina is better protected but full of local boats and a few long term expat type yachts. We left early next morning without regret. It is relatively inexpensive at least.

Around the corner of the coast, the Cabo de Gata,  and into the Costa del Sol was Almerimar Marina and another convenient stop. But Almerimar, even though its main effort is real estate development, is a very well run and well protected marina that's really oriented towards cruising boats. It was a very good place to leave the boat for couple days and drive up to visit Granada and that's exactly what we did.
The drive itself was the first revelation. The roads were absolutely first class new divided highways. The coast seems to be a narrow plain that just a few miles inland rises steeply into the the Spanish Sierra Nevada mountains which are the highest in Spain and, we were told many times, the highest in Europe other than the Alps. And that plain along the coast is almost completely covered with plastic green houses. Hundreds, maybe thousands of square miles of plastic green houses. I've never seen anything like it anywhere. They're growing fruit and veggies for all of Europe here and the place almost looks like its covered with snow. What a really big storm does would be interesting to see. Most of these green houses look pretty sturdy but I bet there's a lot of plastic lining the sea bottom along the Costa del Sol.
Granada was a great visit. In 1492, the same year they commissioned Columbus to set out for the "Indies",  Ferdinand and Isabel took Granada back from the Moors finally ending seven hundred years of Moorish occupation of much of Spain.

They set in motion the building of the massive cathedral in Granada and are buried next to it in their own  church where the bodies are still interred in  the crypt beneath their monuments. The cathedral and other sites in Granada are well worth the visit but the reason to go to Granada is the Alhambra, the old Moorish castle and fortress above the city.

The Alhambra is one of the most visited tourist sites in the world. We were told Spain gets sixty-eight MILLION tourists a year and more than two million a year tour the Alhambra. With good reason, it is a lovely palace/fortress complex in a lovely setting.The Moorish architecture and decoration is beautiful. The tourism is pretty well regulated and although it was very busy it wasn't completely over run and we could enjoy the tour. Get tickets in advance and get them for early in the day before the sun really does its thing. 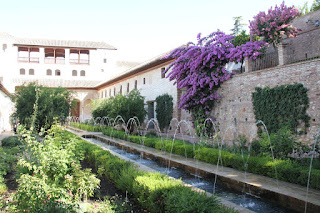 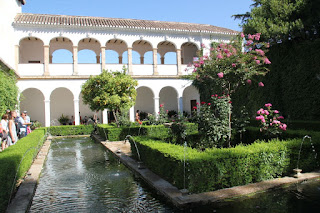 It was over one hundred degrees in Granada that day and we were back in our hotel after the tour for a nice siesta well before that temperature occurred. We stayed at the Hotel Casa 1800 which is a 17th century mansion renovated very nicely into a lovely and very comfortable boutique  hotel in a great location, the Albayzin. If you go,  stay in the Albayzin, the old part of the city below the Alhambra, the area is worth the trip in itself.
We returned to Almerimar and the weather looked like a flat calm motor to Gibraltar. There was nothing that interested us along the coast  and in a few days the wind was supposed to pick up and blow like stink directly on our nose. So it was either leave or wait another week in Almerimar. We left. And we did have flat calm conditions for most of the run, perhaps the flattest ocean I've ever seen. But we also had two to three knots of current against us most of the way. And that night we had FOG! The first fog we've seen since leaving the coast of California eight years and almost twenty three thousand miles ago! And there's plenty of shipping traffic coming through the strait into the Med so, since the visibility was often about zero, we were pretty much glued to the radar and AIS all night. The hope is always that there's no small craft out there with a poor radar return and no AIS. We certainly wouldn't have seen them until the last second. For those who don't know what AIS is, its a GPS based position reporting system that all commercial vessels are now required to have and many yachts use as well. There are several levels of AIS but we have one that sees other vessels, their course, name,speed, destination, type of vessel, etc, etc and gives a computed point of closest contact and warns if the vessel is likely to come within a selected warning zone. Other vessels see the same info on us. The greatest thing since radar!
It all worked out, we didn't hit anything. As in aviation that is very important. We got into Gibraltar at the very nice Queensway Quay Marina where we intend to relax for a few days before setting out on a some more land travel in Spain and maybe Morocco. Thanks for following along.

Love to all,
Bill & Janet
Posted by Bill and Janet Wickman at 11:02 PM

You have become one with blogging……great synopsis and actually sounds like you are on vacation and having fun! Of course those who have followed the path less traveled by know you are just leaving out the good parts, getting to all these interesting places takes effort and work, but I won't tell anyone………keep on having fun! While you brave the fog and high seas, we duck bullets in the movie theaters back in the USA……..
Walter

Great pictures Bill - especially of Gibraltar. As I remember, there is an airport runway at Gibraltar that has a crazy approach so as to not overfly the Gibraltar border line. Apparently, it can get windy on "base to final" sometimes, making the landing very interesting. You are living the dream !!

Always have loved Espana - Disfrute- love it all ! We love the updates.

Great post and as always very nice pix. The first fog since northern California! Amazing. Probably felt just like home :-). Isn't the Gibraltar airport the one with the city street that runs across at least one of the runways, complete with traffic lights to stop the ground traffic?

Hey, mom and dad are here visiting (Dad just turned 80)...they send their greetings and LOVED reading about your trip and adventures!!!Thanks so much for sharing, I will definetly ask you guys for some touring advise on my next trip to Spain or that area! :-) ---- have fun! (I will be in Portugal end August for a week)