Plan 'B' to Barcelona

Truly an elegant city. That's our take on what we've seen of Barcelona in the past four days.
And we hadn't planned on coming here at all. Plan 'A' had been to work across the Balearics almost directly westwards to mainland Spain and then south along the coast to Gibraltar, eventually. But Barcelona beckoned only ninety miles to the north of Mallorca. And we had heard so many good things from family and friends who had visited the city, and Seabird was heading this way as well,  that it  seemed a good time for a little change of plan. After all, that's one of the 'joys' of this way of life, we can change our minds about things.

So we're very comfortably berthed at Marina Port Vell in Barcelona. Marina staff are especially helpful and the facilities are down right fancy with one exception. This being that so far, in four days, the very new and spiffy marina club house hasn't been able to supply hot water to the men's showers. But I have hope, they seem concerned, we'll see. We're also getting a little outboard motor work done. After eight years the fuel supply hose and fittings are getting rotten plus the thing didn't want to run below about one thousand RPM. Barcelona, a city of several million with a very active maritime scene seemed like a good place for a little outboard overhaul. After two days of struggle with the marina contract outfit who handles all work done here I'm beginning to think I should have done it myself as usual. They promise results today. Again, we'll see.
But enough whining. Its a great city with a culture that goes back to the Augustan age of Rome and has transitioned beautifully into the modern era. The marina district is a perfect location from which to enter the most beautiful part of the old city. The architecture  is lovely. From the wonderful and huge monument to Columbus on the city front to the marina district to the broad avenues full of very modern traffic to the narrow byways of the old city its mostly 13th-19th century stonework.

Even the occasional recent structure is usually well integrated. We walked over ten miles around the city the first day we were here and haven't slowed much since. There are two very nice large Gothic churches and many others on a slightly smaller scale. 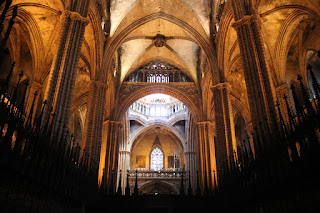 There are many museums including the very excellent Picasso Museum dedicated mostly to his early work in Barcelona. The Rambla is considered the greatest street in Spain and is a wonderful  pedestrian avenue. The market off the Rambla, the Mecat de la Boqueria, is one of the most wonderful food markets we've ever prowled. 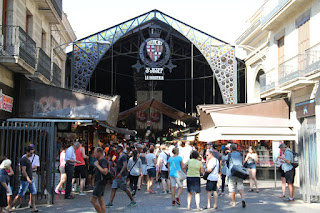 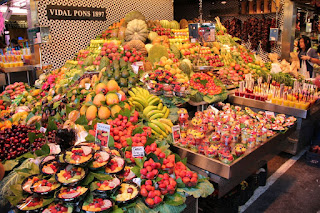 And Barcelona was the home of Antoni Gaudi's greatest obsession, the Expiatori la Sagrada Familia (Expiatory Temple of The Holy Family). The church is yet unfinished but is colossal in a very strange "Gaudi Gothic" and has to be seen to be believed. Much of the interior is finished, the central tower is yet to be completed to its full 170 meter height,  but its still a huge structure. Do I like it? Well……….hmmmmm……….it is unforgettable. It is awesome. I have to admire the man's vision and force of personality.

Janet likes it. I sit in the nave and stare up into the arches and think that it would be better without the foo foo stuff. I love Gothic cathedrals. Chartres is my favorite. I cannot think other than that Gaudi just a little toooo egomaniacal or that he was not well served by those who took over the work after his death. There is lots of other Gaudi work in Barcelona. You come to this city, you need to visit his work.
We'll be here a few more days. The weather is against us leaving until about the fifth. In a week we can only begin to  know any great city. Barcelona is worth the visit on many levels and we did good coming up here.

The plan now is to head back to Mallorca and spend a couple days in Palma. It was a Mediterranean motor job on the way up and probably will be on the way down. Could be a lot worse. We did a couple anchor outs on Menorca and and Mallorca in nice bays, here called "calas",  before bailing for Barcelona and we'll do some more anchoring out after Palma before heading over to Ibiza and then the mainland
Tonight its dinner with Seabird, we always enjoy their company, and tomorrow and the next day and the next day, we'll see some more of sweet Barcelona.

Love to all,
Bill & Janet
Posted by Bill and Janet Wickman at 7:20 AM

Bill -- I resonated with your foo-foo comment about Gaudi's work. I wondered whether the word Gaudy was a derivative of Gaudi :-). However, according to Wikipedia, this is not the case. I still wonder though :-). In any case, the unfinished cathedral must have been an awesome sight. Thanks for sharing. And as usual the photos were great Janet. Keep em coming.

Siempre me gusta Barcelona !!!!! You two know how to live life....keep it up. Sue and I hope to get out to the Gulf Islands in Cananada in about 10 days. Hasta luego ! charlie & sue

Love it as always! I was surprised and pleased to see a comment from Walter.
Viaje Bien!
Mike & Liz
S/V Argonaut (now S/V Drifters)

We are convinced and I think Spain is the one country in the eu where it is supposed to possible to get a one yea Visa. We are still blocked from seeing your photos, but the text was fascinating as always.

Get those showers fixed before we get there!

We just arrived in Sardinia near Olbia and the weather looks near perfect for sailing to Barcelona (325 Miles). Hopefully it will look as good when we get ready to leave. We will be at Vell at least one month with visitors beginning the end of July for 2 weeks.