Land travel! I know this supposed to be a sailing blog its really a travel blog. We're just using the slowest, most inefficient form of transport known, a sailboat. The plan has been for English speaking rather homey Gibraltar to be a base for some exploration of the Spanish wilds. And that plan is in action. Yesterday we got back from a car trip north to Seville, then east to Cordoba and back south to the coast and Gibraltar.
Great trip. But very hot! It was one hundred and four degrees in Seville one day and over one hundred  every day we were inland but at least it was also very dry. Driving north from Gibraltar the  excellent highway took us through a low pass in the mountains and then down into the broad valley that forms the interior of Andalucia. It reminded us very much of coming out of the coastal range into the Sacramento Valley of central California. Its a rich agricultural area. Lots of wheat and corn. Huge fields of sun flowers and some form of bean. Some orchards and a few olives. Lovely, well tended and productive country.
And Seville is a lovely city. Of course there are modern blocks of faceless apartment housing but much of the  wonderful architecture is preserved, especially in the inner part of the city. We were only going to scratch the surface of what's to see in Seville but the the cathedral and the old Moorish Palace area, the Alcazar, were our main interests. We had also had the very nice treat of having Steven and Carol Argosy of Seabird  use the train from Barcelona to be in Seville at the same time so that we could run around together. This is great fun for camaraderie starved Mediterranean cruisers.
The Alcazar started as a fort in the ninth century and was gradually, over the next few hundred years,  turned into a palace and garden residence complex for the Moorish rulers. When Seville was reconquered by the Christians in 1248 it was kept in use and the gardens and structures continued to be enlarged and modified. Its a beautiful conglomeration of Moorish and Spanish medieval art and architecture.
But there were two real highlights for us on this short trip to Seville. First is the Catedral de Santa Maria de la Sede, as the Seville cathedral is officially known. Its the largest gothic cathedral in the world and the third largest Christian church. Its colossal in size and the the art work displayed throughout is simply beyond priceless. The exterior is so huge and it is sighted in such a manner that its difficult to get any one view of the building. The interior is stupendous and individual aisles and chapels are beautiful.
As a whole it still doesn't work as well, doesn't inspire the awe of Chartres or Notre Dame or Canterbury (my favorites) but it is a bigger work and in many ways equally impressive. One thing, amongst many, that I particularly like is the tomb of Columbus. In the south transept the bones of the great navigator and explorer, one of my personal heroes, are appropriately encased and held aloft by the  kings of arms, in bronze, of the four original reigns of Spain, Castile, Leon, Aragon and Navarre.

As a last remark on the magnificence of the cathedral Steven suggested that since Spain has economic problems, since the art work in the cathedral is so priceless and the building so huge, that the art be sold off and the building remodeled into condos. hmmmm……….I suggested that the Spanish have probably not forgotten how to draw and quarter a heretic………oh well
And the second highlight of Seville was a little unexpected, that was Flamenco! I had said that before we left Spain, since the timing wasn't right for a good bull fight, I wanted to see some real flamenco. And since Seville is considered by many to be the heart of flamenco, Seville was the place. We asked around and got the same recommendation from multiple sources and it was that unless we waited until after midnight in some smokey flamenco bar the very best, maybe the very best anyway, was to be had at a flamenco museum or institute fairly near our hotels. So we made reservations, wondering what to expect, and went to the show. 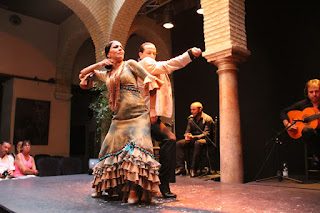 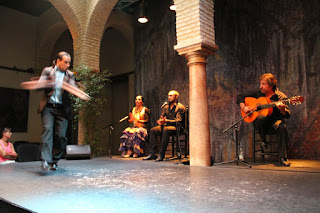 I think we all a little over whelmed by the quality of what we saw. I had thought it might be a rather sterile display of the 'art'. Far from that the setting was small and intimate. The guitarist wonderful and the singing and dance was full of all the passion and intensity one could ever hope to see. Great show! I would still like to see those same people in some smokey bar at two in the morning just for what their interaction with that audience might be but  it was clear they got to everyone in our audience pretty well. Unforgettable.
We also hit a nearby bull fighting bar for tapas and drinks afterwards. We knew we had a good place when the flamenco group we had just watched came in to unwind after the show. It was nice to thank them in person.

Steven and Carol stayed in Seville another day and we were off the next morning to Cordoba. The main reason being to see the Mezquita, the huge and unique mosque/church in the oldest part of the city. And the Mezquita did not disappoint. It was very, very nice and made especially nice in that as we entered the relative cool of the the building, it was 103 degrees outside, we began to hear a magnificent organ in full song.
Bingo, we went through the wonderful 854 pillars with their red and white painted arches and into the the central Christian cathedral where the organist was just beginning to work with a technician on some factor in the centuries old and very huge pipe organ.
And most of what he did was just play and play beautifully. So for about an hour we got a wonderful concert in a wonderful setting. I think its only the second time I've ever been in a great cathedral and been able to listen to the music that's possible there.
The Mezquita was very cool. It was first constructed as a Christian church in about 600 AD. Became a mosque in 785 and was reconverted into a Christian church when Cordoba was recaptured in 1236. The huge floor plan is unique in the 854 pillars supporting a relatively low roof with horse shoe shaped red and white painted arches. In the center of it all a renaissance style cathedral was built in the 1520s. And strangely enough, for me at least, it all works. In general I'm suspicious of the over ornamentation of renaissance or baroque churches but here, for some reason, it seems to come together and it is very special. Maybe the music helped??
We had to make an early departure the next morning for the drive back so we really gave Cordoba a short shift. I would say, if you're traveling in Spain, don't miss Seville or Cordoba. But go in the spring or fall when temperatures are lower and crowds are not a factor. Neither the cathedral in Seville of the Mezquita in Cordoba were over crowded but the streets were full and the area around the Mezquita was very touristy.
We're now back on the boat in Gibraltar. The drive was up into the rolling big sky country of southern Spain before entering the coastal Sierra Nevada. As we got out of the valley and into the hills the countryside became almost entirely olive orchards. Olive groves, carefully planted, well organized, well tended with drip irrigation and every modern tool for mile after mile after mile. Most of this is relatively new planting. It has the look of cattle country that has been turned by modern techniques into olive country. Very interesting and impressive. Then it was through the mountains and along the coast and 'home". Again we were very impressed by the Spanish infrastructure and the roads. It made for an easy trip.

Next week we're off by train to Madrid. Carol and Steven will be there as well and we're looking forward to the trip.

Posted by Bill and Janet Wickman at 3:33 AM

Your trip is like a dream! The way that you have the pictures and the writing of your travel are perfect.
Enjoy it!!