It seems I've been neglecting the blog. The past couple weeks have become a bit of a blur. I once quoted a favorite book title to describe our Pacific travels,  "One Damned Island After Another". Here in the western Med it might be called, "One Damned Marina After Another", even though we have been doing some anchoring out most of the anchorages seem rather like marinas.
But there have been a couple significant milestones. First, tomorrow is the 14th of July,  Bastille Day, better known as the birthday of Janet Ryan Wickman back in 1955. That's right folks, please wish Janet a happy birthday for the big SIX-OH! Having  been there myself almost eight years ago I know how it feels. Nobody ever looked better or is sweeter than my lovely spouse.
And yesterday, about noon,  enroute from Denia to Alicante we crossed the prime meridian. We're back in the western hemisphere after seven years in the wilderness. The faithful old boat has crossed about two hundred and forty degrees of longitude since we departed Humboldt Bay,  most of it under sail, much the past couple years under power  and across the some of the Indian Ocean and the Red Sea on the deck of a ship because of the pirate problem.

We left Barcelona for what was an easy over night motor job back down to the Balearics. I especially wanted to see Palma since that was where my first European experiences began back in 1981. Unfortunately Palma was pretty much what I expected, very crowded and very touristy. Nothing except the cathedral was recognizable from thirty-four years ago. The cathedral itself is very large and some of it is very good but its not quite right in proportion and Gaudi did some stuff as part of a restoration  that just doesn't work. Its worth a visit someday but go in the off season. We did visit the town of Deia, the home for many years and burial place of one of my favorite authors, Robert Graves. Even at the height of the season Deia is still relatively unspoiled and very beautiful. Graves would be pleased.
From Palma, Mallorca it was a short day trip over to Ibiza, the main party island in the Balearics. We had a decent anchor out in Cala Portinatx and then, since Ibiza town was exposed to the prevailing southerly wind and since the marina wanted THREE HUNDRED EUROS a night for a berth for our boat, we went to Puerto San Antonio and anchored out. This town is the other big party place on the island. The bay side strip is rather a low life zoo. The sunset strip area is  nicer with some very expensive disco clubs and a rather chick scene. But things don't really start until midnight and then they go until everybody drops or ten in the morning, which ever comes first. We had dropped by ten in the evening and luckily the anchorage wasn't too noisy. I will say the north coast of Ibiza is spectacularly beautiful but we left Ibiza for the mainland without a tear

So the port city of Denia seemed the most convenient place to start down the Costa Blanca. Denia is a nice town with a modern new marina. We did luck out and see the annual Denia parade which was quite an event. Miles of floats and marching bands with no particular theme we could ascertain. Just everyone having a good time. From Denia we motor sailed down here to Alicante yesterday. 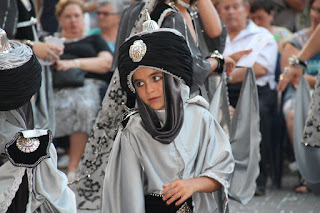 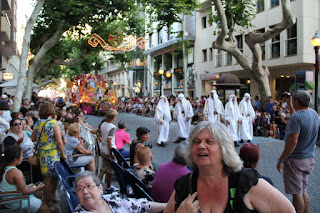 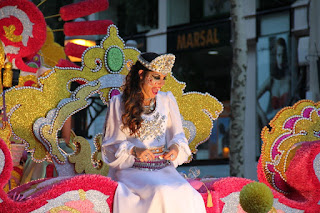 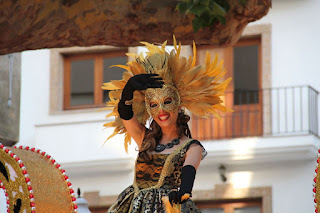 Alicante seems very nice. The marina is very large and well organized. The city is a modern provincial capitol but has a large 'old town' with nice architecture and a lovely esplanade along the waterfront. It also has about the best hill top castle we've seen since Naphlion. And there's even a lift to the top, we'll go up there, maybe this morning. 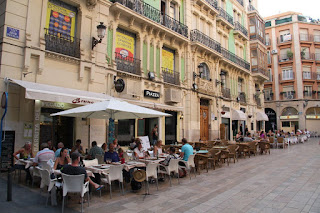 And tonight we have a very nice hotel booked for a little luxury and a birthday celebration. Air conditioning! An endless shower! Maybe a tub! Happy Birthday Janet!

Posted by Bill and Janet Wickman at 12:22 AM

Wishing you a very happy and healthy birthday Janet. Man, I hate noisy anchorages so I am getting a bit queasy about heading your way next year. . Also, 300 euros a night for a marina! Yikes. Maybe we should just chuck if all and ship her back to the states. mark would not agree to that suggestion I am sure.
Happy birthday.. Enjoy your a.c. And shower!

HAPPY BIRTHDAY Janet! Enjoy the 13 of July in a good hotel with many showers... A good dinner for tonigth with a candel will be the best!!
In Greece we had an deal with Europe but the problems are now in the Greek govenment. They were saying that didn't want those rules that SAMARAS sing for Greece and TSIPRAS sing stronger meters for the Greek economy!!
So enjoy your life now and for us!!

Happy Birthday, Janet:
Sonia and Me wish You a nice day, enjoying the spanish tapas and wine..!!
Best regards from Gran Canaria...Sonia and Agustin.

HiYa Bill,
Been reading your blogs with avid interest. Keep up the scintillating commentary. We'll take this opportunity to Wish Janet a belated Happy big Birthday and for happy days for the coming year.

We have been out of communication for a few days but are now back, where we parked together in Preveza as we a are going home for August. Your chair in the pub/cafe, though empty, still has your image in it for us.