Walls,  redoubts, cavaliers, bastion upon bastion, the most massive fortress in the world. Walls extending up from the sea to one hundred and fifty feet above the shoreline and forty feet thick. Walls within these walls and bastions protecting the walls and each other from any angle of attack. Broad and deep ditches  dug before the walls on the landward sides.

Since the Knights of St. John occupied Malta after being forced out of Rhodes in 1523 the islands have proven impregnable to any assault. The Ottoman Turks carried out the greatest siege in history over several months in 1565 and were eventually driven off after terrible losses. Innumerable smaller attacks were repelled without serious threat. In WW II Germany and Italy bombed, mined and shelled the islands from 1940-43 in the greatest siege in modern history but never were able to break the defenses and no invasion took place.  Malta's strategic position in the Mediterranean has remained secure.
Today Malta is a lovely and charming place. The land itself is nearly barren and arid. There's a  veneer of agriculture but the soil is thin above the yellow limestone underlying everything. That limestone and the surrounding sea form the  strong visual impression of the islands. And the stone, which is easily quarried, is used in all but the most recent architecture for everything from baroque churches, to apartment complexes to the truly massive fortifications. That lovely warm  light yellow stone is, to me,  the symbol of the islands. 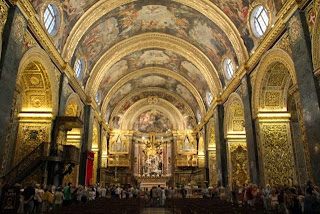 We came down to the main island of Malta after a few nice days in Gozo and spent a night in St. Paul's Bay where Paul was ship wrecked in AD 60 enroute to Rome. Paul brought Christianity to the islands and they are very strongly Catholic even today. We got rained on during a positively chilly motor down to the Grand Harbor at Valletta and have been very comfortably moored at Msida Creek Marina since that time. The Royal Yacht Club of Malta has been very accommodating. We've been exploring around the city complex of Valletta doing the tourist thing.

The food is very good. The city is lovely. The architecture from medieval palaces to baroque churches is beautiful. The Maltese are friendly and open. We've been socializing with Bill and Judy Rouse of SV BeBe who we haven't seen since the Ha'pi' group of Tonga in 2008 and that is great fun.

So it's a sweet time in Malta. We'll be here a few more days and then, if the weather holds, we'll sail north the fifty three nautical miles to Ragusa di Marina on the SE coast of Sicily.

Posted by Bill and Janet Wickman at 5:21 AM

Love reading about your adventures... and your pictures are truly "eye candy"! Good stuff!

Very nice pictures and very good writing. We realy love reading all!! Have calm seas and enjoy all the times...