Rollin' In To Malta

"The Assyrian came down like the wolf on the fold,
and his cohorts were gleaming in purple and gold,
and the sheen of their spears was like the stars on the sea,
when the blue wave rolls nightly on deep Galilee."
-from "The Destruction of Sennacherib", Lord Byron

I've always loved that piece. Even though it had nothing to do with Greece other than Byron rather sadly dying from Malaria at Messolongian trying to support the Greek war for independence. But as we departed Preveza southwest  bound on a day with more than fifty miles of visibility the rugged mountains of Epirus were our last view of Greece. Out of those mountains about twenty three hundred years ago came Phillip the Second and his peerless son Alexander the Great. Alexander was truly the wolf and he and his Macedonians ate up the Assyrians and almost everybody else like raw meat. My first love for Greece has more to do with the classic Greek city states but they were supplanted by Alexander and then the Romans and that era which gave us so much ended. The gift to western civilization remains.

So watching Greece recede over the horizon was very sad for me. Don't know when I'll be back but the country and the people, my friends,  will always have a place in my heart.

And the 'blue wave' was definitely rolling in the Ionian Sea on the way to Malta. We left early in the morning of the 10th with a nice following breeze in sweet sailing conditions. The forecast was for a northernly to fill in with as much as thirty five knots but mostly twenty five. The forecast was spot on and we had twenty four hours of twenty five to thirty knots directly on the beam. The highest I saw was thirty four in a gust. A double reefed main and about half the stay'sl  handled that well enough but  couldn't do much about the beam seas. In the Pacific those winds would come with a fifteen to eighteen foot swell of probably long duration and an occasional breaker. In the Med that meant eight to ten foot seas but very short duration and lots of breaking seas. Airstream is a very dry boat in general but I've never seen so much water over the decks. Every few minutes we'd catch one breaking onto the boat and I'd wonder if the dodger was going to be swept away. It was a fairly nasty way to get back into passage making after a few years of day sailing. Other than a badly chaffed second reef line and a stay'sl roller furling line I had to cut at three thirty in the morning after I hopelessly jammed the thing in a winch, we suffered no damage. I was actually rather proud of myself for cleverly cutting that line and quickly getting in a Sheet Bend to save it given the conditions. Once in awhile I can win one.
So after twenty four hours of nastiness the seas swung around to more astern, as forecast, which was a lot more fun. A few more hours and the winds moderated, as forecast. And a few hours later the wind died almost completely, not as forecast, and we motored the rest of the way into the island of Gozo, Malta in beautiful calm conditions. Mooring lines off to lines on, three hundred and sixty  eight miles in fifty six hours, twenty minutes. That's about perfect for the Med, either too much wind or not enough and usually in the wrong direction. 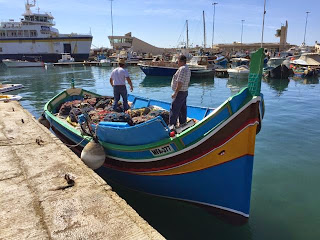 Now we're nicely situated at Gozo Marina in Mgarr. The weather is gorgeous and sunny. The place is very friendly and very cute and full of history. There are some really great looking restaurants. The Gleneagles Bar is a great mix of fishermen, yachties and a few tourists. Last night we ate at a nicely upscale Cantonese place and the break from Med fare and the contrast in cultures was great fun. Please stay tuned, we like Malta!

Posted by Bill and Janet Wickman at 7:18 AM