Layed Back In Preveza

Janet's here, whoopee! She had a nice trip over although she didn't get into Business Elite on the JFK-ATH leg, too many stinking active employee non-rev types ahead of her in priority. But she got into Athens on schedule and then slept the entire six hour bus ride to Preveza. Amazingly she went into a normal routine and has been sleeping the nights away. Very good for her.

Life around Preveza has been sweet. The weather has been generally clear and sunny with highs in the seventies and lows in the fifties. Things continue to go well on the boat. We launched the dinghy this afternoon for a little test run. The trusty Tohatsu started on the first pull and ran us around the bay without a sputter, etc, etc. My little projects have been  getting completed with nary a single self induced disaster, so far.

Preveza has been pleasantly  social. We had a very nice English couple, Richard and Catherine Stokes on "Vagabond",  beside us since I've been here and they were great fun. Just a few minutes after they shoved off for parts southward Tim and Ruthie Henning arrived. We haven't seen them since Penang three years ago. They have been traveling around Europe while their boat "Victory Cat" is being shipped to Turkey and they want to look over Cleopatra marina as a place to haul out in a few months. So we'll have a couple days to see them. Then comes the big move.

The plan is to shove off for Malta Sunday morning. Its three hundred and fifty miles to the marina at Goza where we plan to arrive. Should take about two days. We have a nice northerly forecast which is supposed to start out light and then build to twenty- twenty five knots for most of the trip and waft us to the southwest.  This will be the first overnight passage we've done in at least three years. Much preparation, HydroVane rudder and vane mounted, etc.  Big excitement.

So tonight its dinner with Tim and Ruthie. Tomorrow a few last minute boat jobs and Sunday we're outta hear. Wish us a bon voyage. 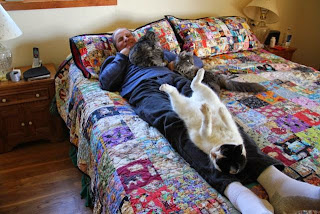 Posted by Bill and Janet Wickman at 11:34 PM

Alles gute and have a great trip!!!
Love the Pics:-)

Bon Voyage! Deb and I wish you fair winds and following seas and the best of luck.

Happy Trails, Buckaroos! We enjoy the blog since were confined to the PNW sailing these days.

Bon voyage! I'm in NV, on track to arrive on Monday. Have a delightful passage.

Have a nice trip in Greece. We'll be in Greek islands in july, will you still be there? Hope to see you one day in Tahiti or elsewhere.