Trapped By the Meltemi

And actually, couldn't be happier. The Meltemi is the dominant north wind that sweeps down the Aegean regularly in the summer time when a big high is established over the central Med. It typically blows twenty-thirty knots although if it gets reinforced by another system it can go to strong gale force easily enough. It usually lasts for several days although it can go on for weeks.
We're nicely stern tied to the quay at the Katapola port of the island of Amorgos and it is a lovely place we like very much. We've been here three days now and there's probably another coming. This  Meltemi is supposed to blow out tomorrow night. In the central area of the Aegean, the central Cyclades, the Meltemi tends to swing in from the NW and since our next planned destination is the island of Naxos, forty miles to the NW,  we don't feel like beating to weather. The first rule of cruising, "Gentlemen never sail to weather.", can be applied very nicely here. We are in no hurry. We like where we're at. So why go out and beat up the gear when in a couple days we'll have a nice trip?

It seems the summer systems may have finally arrived. We're still sleeping under blankets at night but the days have lost their chill. The only clouds are the lenny stacks over the islands and the humidity is nearly zero. Soon it'll be plenty hot but for now it is lovely.
Amorgos is one of our favorite places ever. Its a very, very rugged and mountainous island.  The east coast is entirely cliffs two to almost three thousand feet falling nearly vertically into the sea. Its barren of all but the most hardy vegetation. But it is starkly beautiful surrounded by a sea of every possible shade of blue. We're out of the Dodecaneses and the Italianate architecture. These islands are the Cyclades and the villages are classic Cycladic, what most people think of when they think "Greek island". Nearly all buildings are cubist white washed with blue shutters and doorways. They are very beautiful and either  well kept or total ruin. Bougainvillea and Geraniums (and cats) are everywhere. 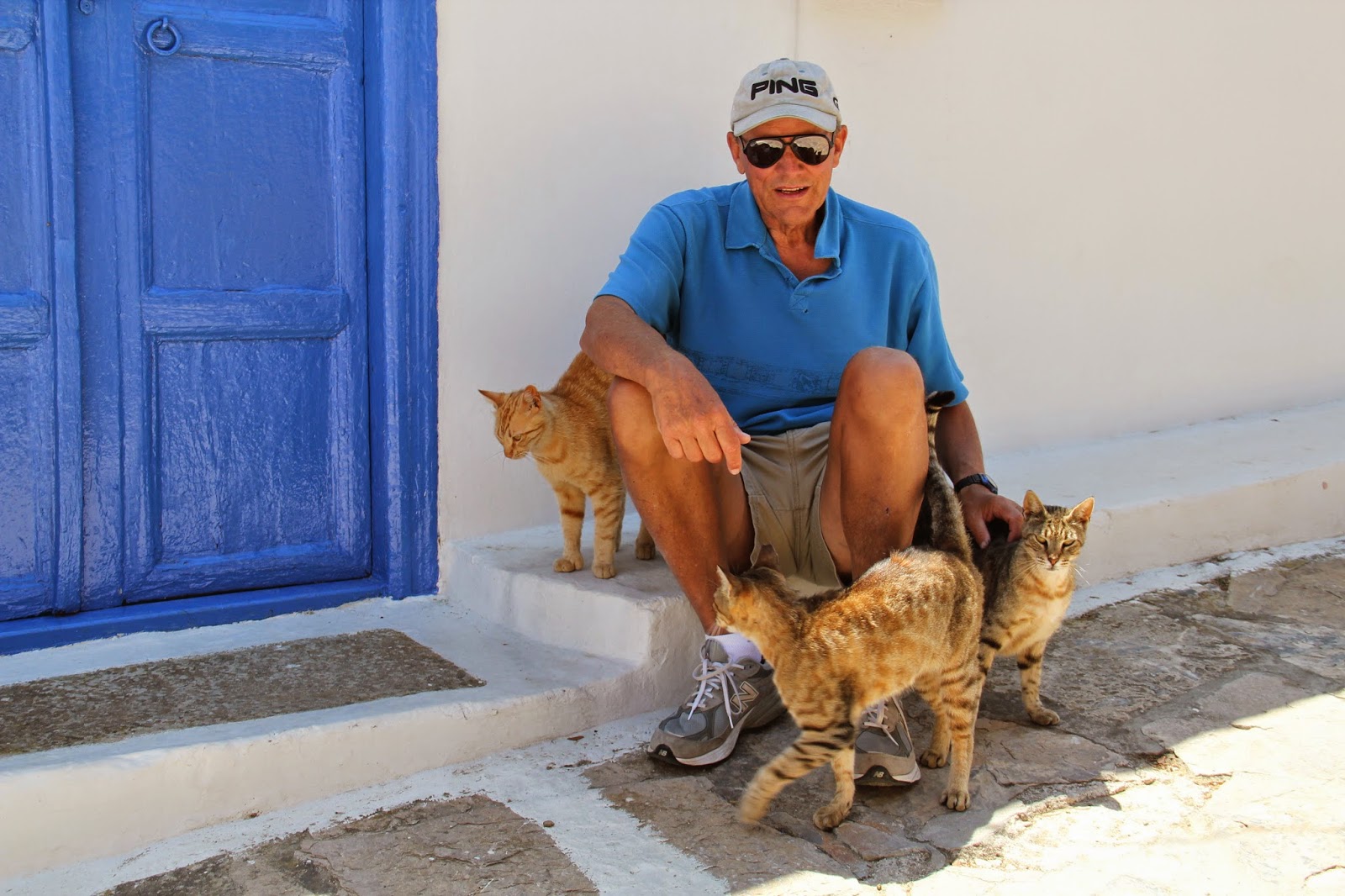 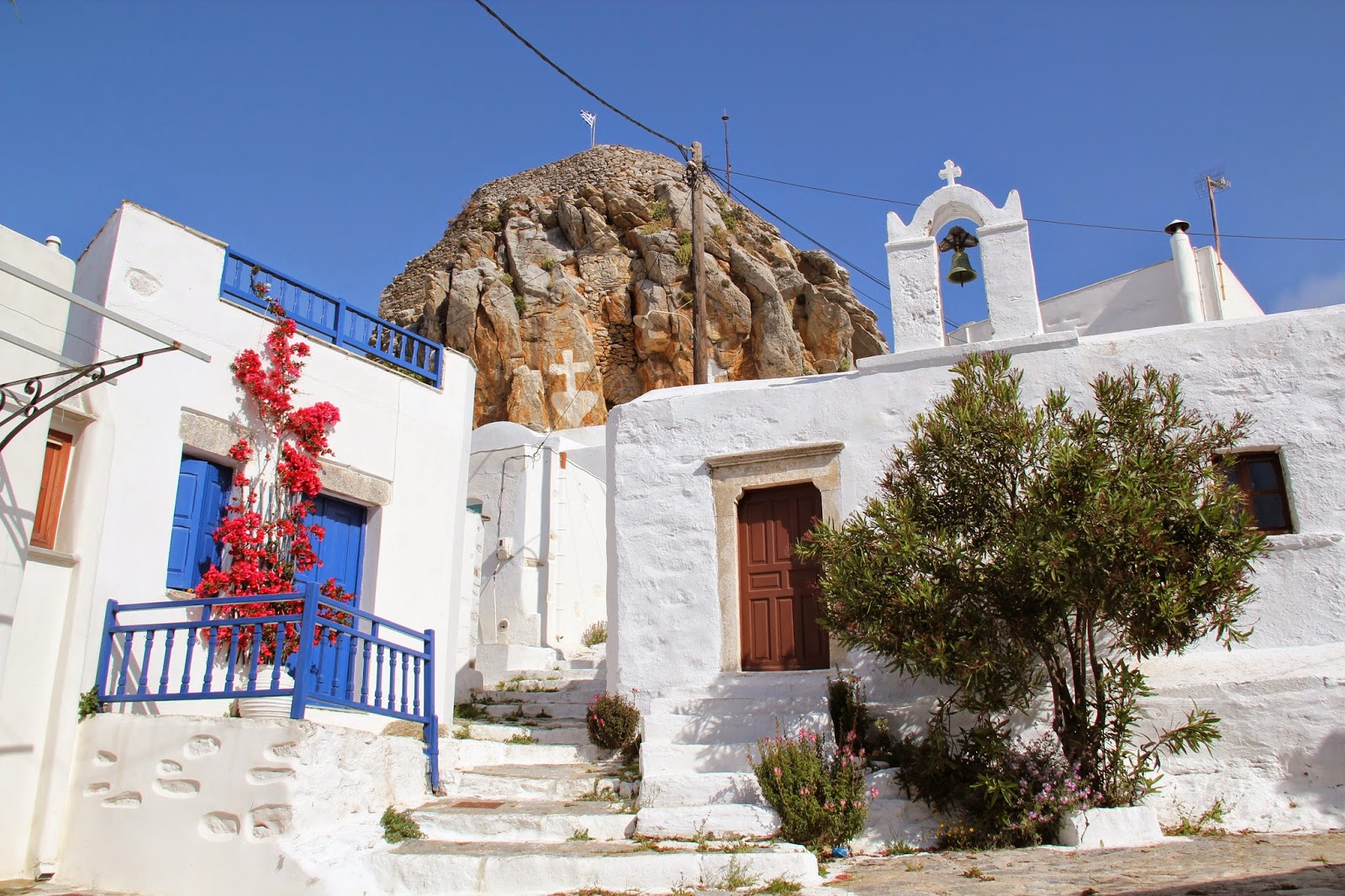 This time of year, before "the season" has really begun, things are pretty quiet and us yachties have the place almost to ourselves. There are ten yachts here in the harbor right now, the most we've seen since departing Symi. We're reasonably well protected but enough wind funnels in to make watching the few charter boats that came in last night and attempted to stern tie very interesting. As is sometimes said, the only real damage was to the ego. We've all been there a time or two. We have very nice French neighbors tied up alongside. 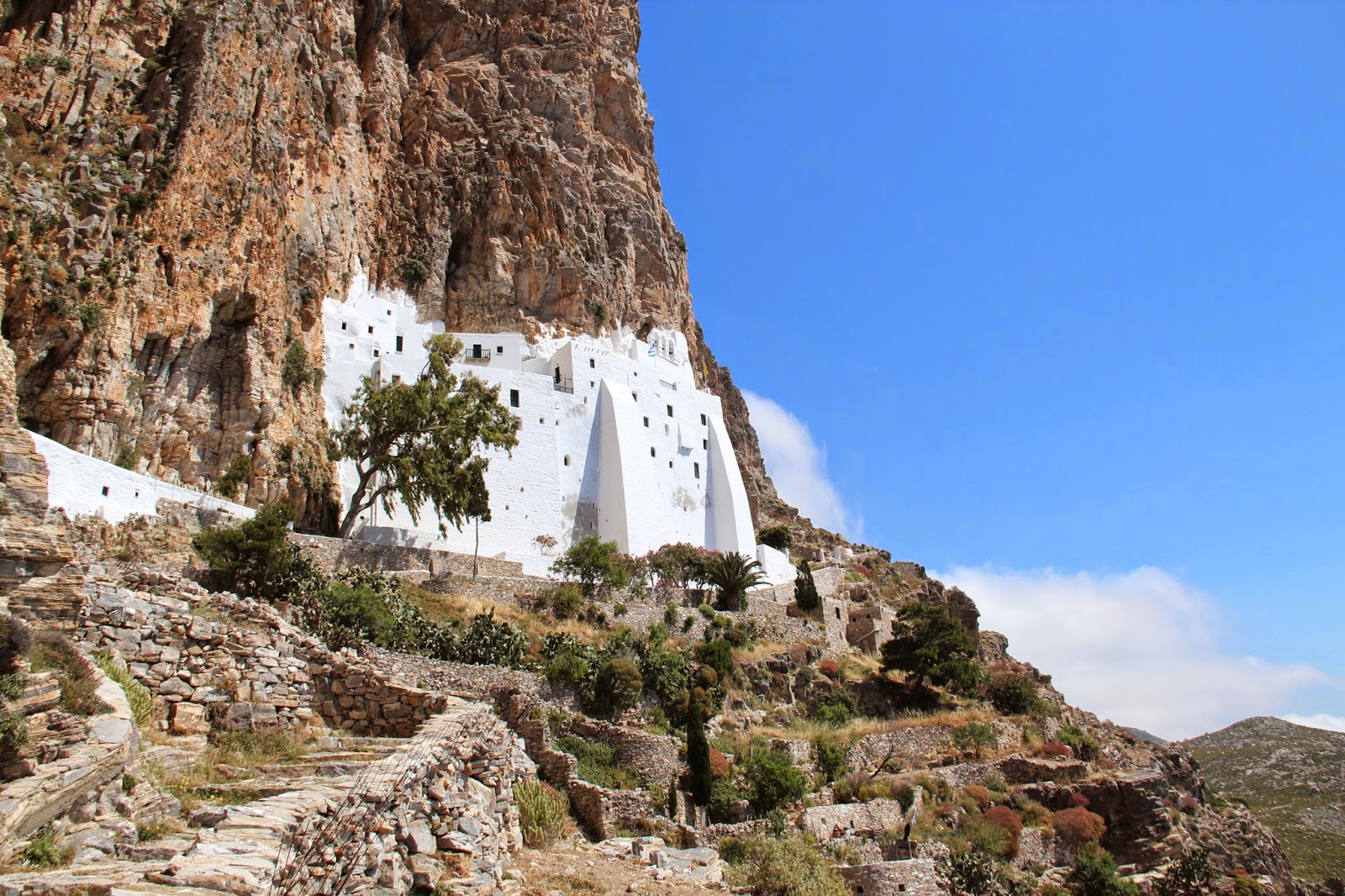 Yesterday we rented a "Smart" car, a motorized roller skate IMHO but Janet thinks they're cute, and drove the island. The chora (main village) is quiet and beautiful with the remnants of the usual castle above. The main destination was the Hotzoviotissas, the monastery of the "Panayia of the Presentation" which sits on an east coast cliff with a thousand feet vertical above and below. A truly spectacular site and a great visit if you don't mind a little climb. Built and occupied since the ninth century the monastery's few monks  are  friendly and welcoming.

Beyond yesterdays  drive we've been just exploring around the bay and relaxing. There's enough open here now to get good food and goodies. This is a great island and I think even in the height of the season it would be a fine visit. We arrived here after leaving Symi and going to Tilos and Astipalaia.
Tilos was very nice and very quiet. Almost nothing going on yet. We were actually side tied, a real rarity, to the nice quay. Unfortunately it got  chilly and rainy and with only one taverna and one small store open we moved on to Astipalaia.
Astipalaia is western most of the Dodecaneses and, like Tilos, more Cycladic in character. The Venetian Castle above the chora is magnificent and the Skala port was lovely. Again it was uncrowded and quiet and a beautiful island. Heikell uses a photo of the Skala harbor at Astipalaia as a cover shot for his "Greek Waters Pilot" for good reason.
So it'll probably be Amorgos for another day. Tough duty. We have found a place with perhaps the best baklava we've ever had for a little treat. Fifty feet across the quay is as good a gyro place likely to found anywhere. The liquor unique to the island, Rakomelo, a kind of raki flavored with honey and spices, is delicious. There is a nice bakery, a laundry, a hotel with great showers available for a few bucks, some really nice restaurants and a friendly local population. Why leave? 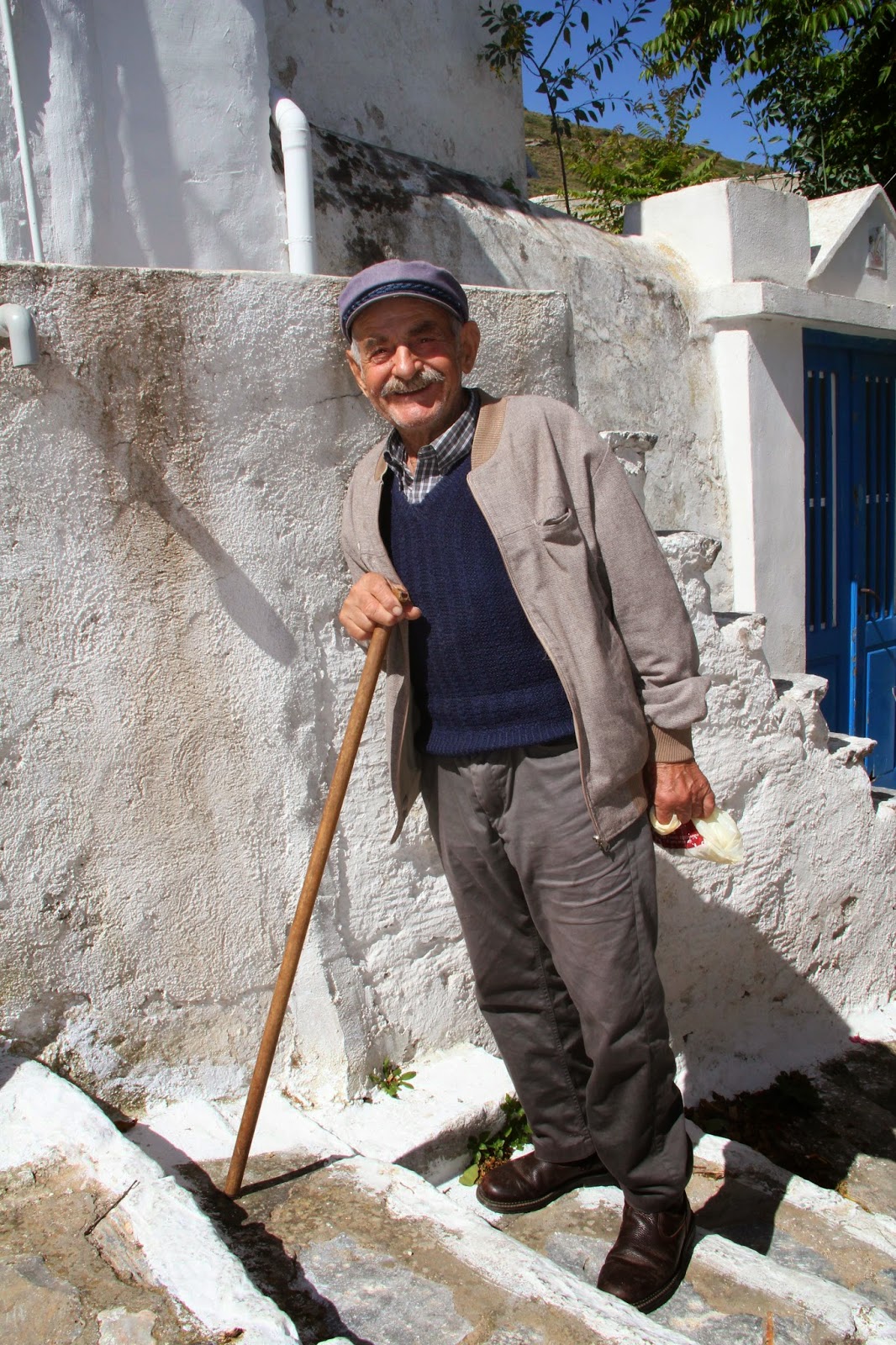 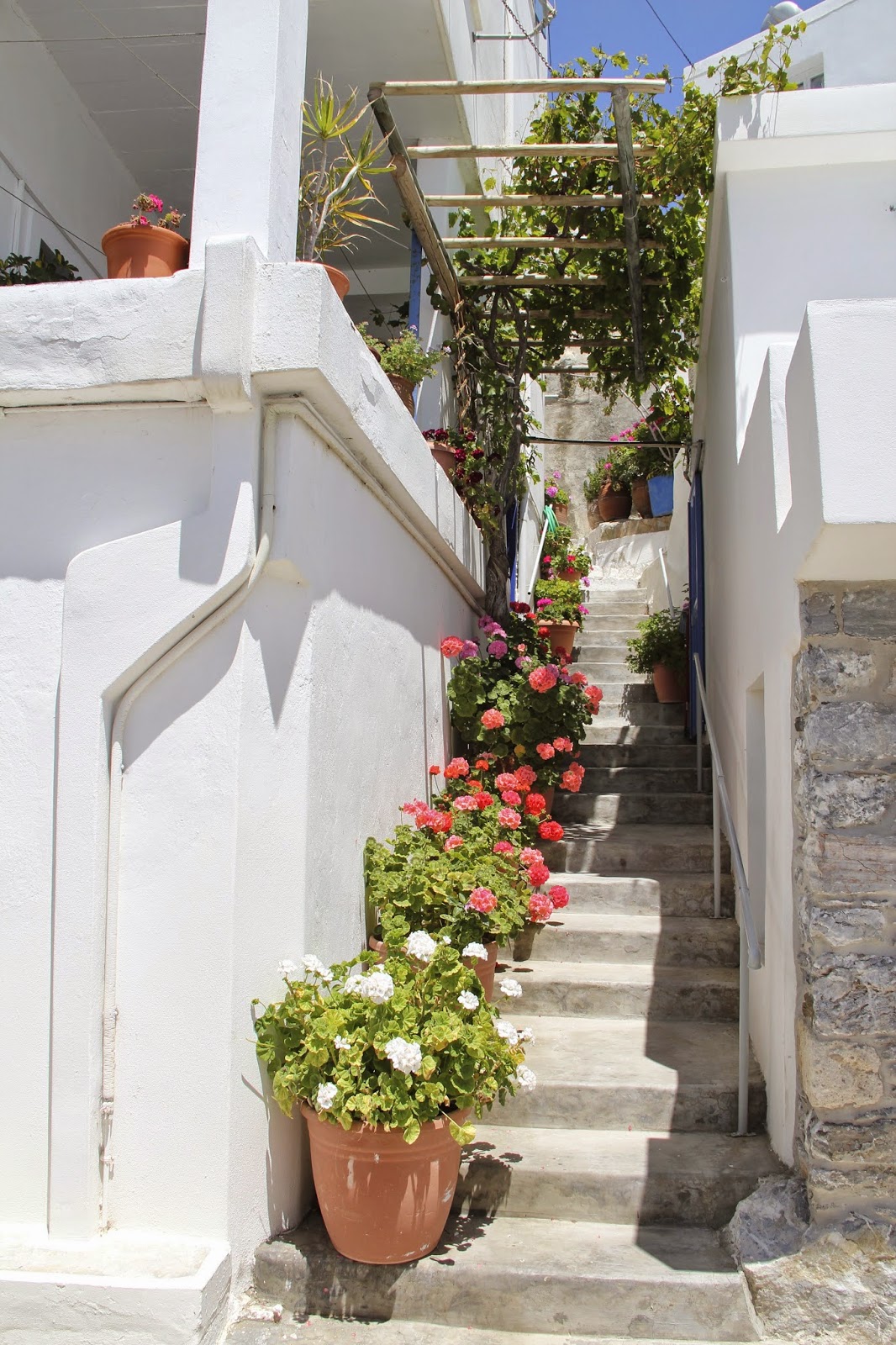 Restless soul I guess. But we plan on heading for Naxos and taking the ferry from there down to Santorini, Santorini is not a good place for yachts,  for a little revisit of the place we got engaged twenty four years ago.  Should be fun.

Love to all,
Bill and Janet

PS: Click on any photo for a larger view.

Posted by Bill and Janet Wickman at 7:20 AM

Great blog post as always.
Love all the pictures, too.
(That Greek gentleman looks straight out of Central Casting)

Funny I should be thinking of you both today, and wondering when the next post would arrive, and behold! There you are!
Wonderful pictures Janet, and monologue, Bill
Keep them coming!
Thanks,
Bill

K, Bill. I want a signed copy of your book when it comes out. You are in "Eastern Approaches" territory. Ovid