Janet arrived without any more trauma then might be expected from missing a connecting flight in Istanbul making her half a day late. Don't ask why. It happens. Its great to have her here.
We're now in a very pleasant and familiar setting at the Pethi Anchorage on the Greek island of Symi, one of our all time favorites. Getting out of Yacht Marina and Turkey and into Greece is a pleasure in itself. The Turks are OK and Turkey is a fine place for a visit but we both much prefer Greece. That's strictly a matter of personal preference of course and not all would agree. We have very nice friends who have spent years along the Turkish coast and keeping their boats at Yacht Marina. It just isn't going to be our thing. 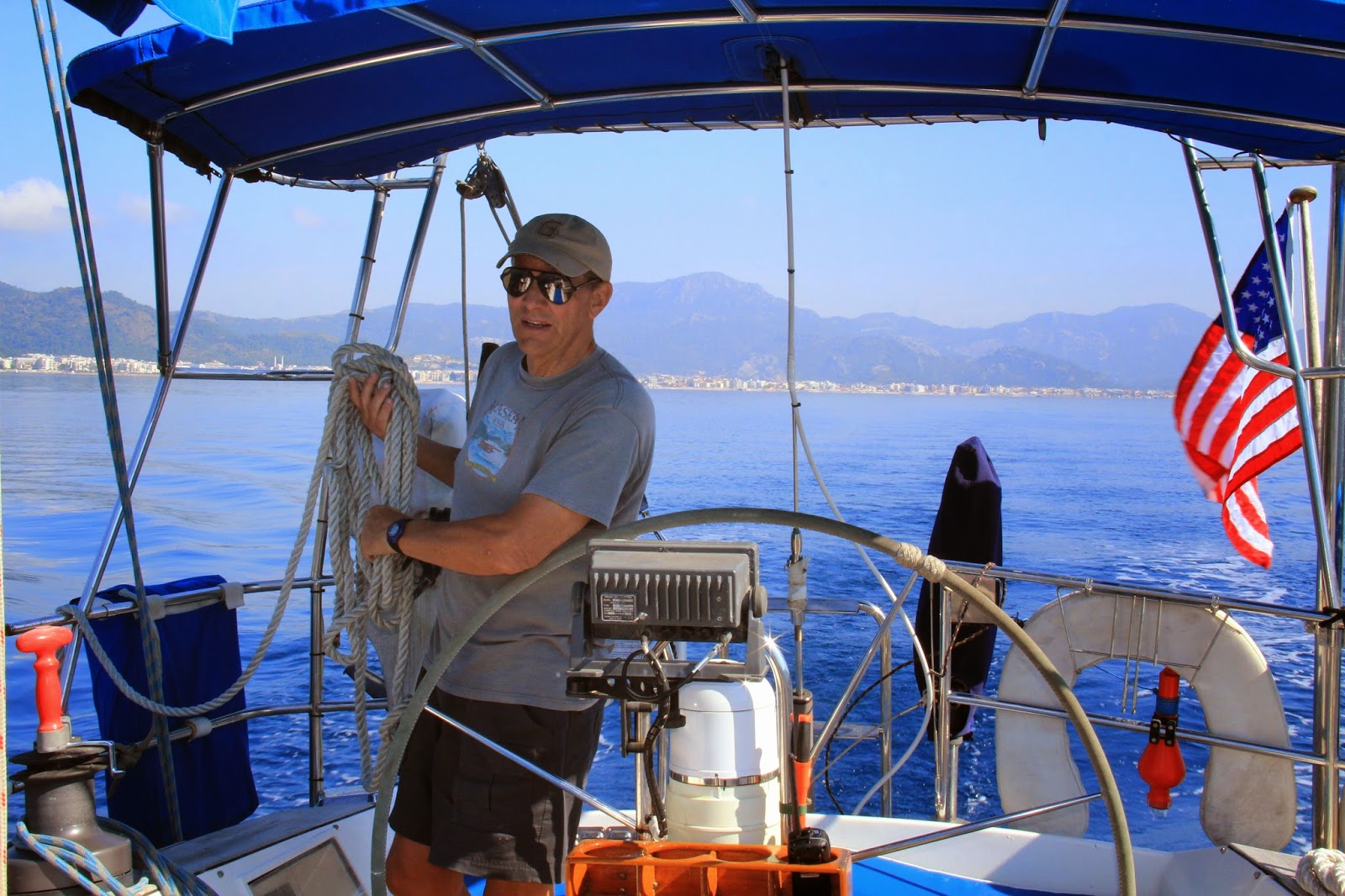 Yacht Marina itself managed to make me pretty unhappy by the time we had departed. Little things like getting overcharged for marina materials, having arrangements made for a decent berth and having the "arrangements" ignored when the time came and having a nice little LED headset/ flashlight "go missing" after some workers left the boat. This stuff, and mostly the way it was handled, made me think about  "happiness"  being somewhere else and the chances of us ever returning to Yacht Marina are fading with each mile we get further west. I will say that Riza at Sharp Marine did some very good canvas and sail repair work for us. The DT Marine machine shop guys were always very good. The guys from VS Marine did a nice job of installing our new windows but left a mess that took hours to clean up. CE Marine did a nice hull polish job and repainted the waterline stripe very well but I paid the Turkish version of top dollar for that work.
We left Yacht Marina directly for Datca and checked out of Turkey after spending a very nice evening with Sandra Crossan,  a Scottish friend who lives in Datca. We actually sailed about half an hour before the wind died away in the channel between Symi and mainland Turkey. The nice thing was that almost everything on the boat seems to be working. "Almost" is the best that can be hoped for after several months on the hard.

Departing Datca it was a short motor over to the Pethi anchorage at Symi and a smooth check in procedure for Greece. Symi remains as beautiful as ever and we're tied up alongside the unfinished wharf at Pethi. Securely tied up I might add. We don't need no stinking anchor dragging like we had last year at this anchorage. Especially since we left the boat for the entire day yesterday and took the fast ferry to the nearby island of Rhodes.
The scoop we had on Rhodes was that the island itself was not particularly interesting but that the old city of Rhodes was well worth a visit. Its not a particularly welcoming place for yachts so traveling there by ferry from Symi seemed the thing to do. The fast ferry, and these big catamarans really do move out, takes abut forty-five minutes from Symi town.

We went over at 0745 and came back at 1900. All that worked fine but the old town itself was the single most heavily tourist oriented place I've ever seen. There are miles and miles of "tourist crap" shops packed against one another. Absolutely every form of junk for sale in every possible space.

OK, it is true that there are a few back street areas where, for a few hundred feet, one might be free to see what the town once offered in the way of beauty and character. The archeological museum was pretty good, actually exceeded expectations.  We might be pretty jaded as tourists but it seems that almost any place in the Aegean that has an airport should be viewed with extreme suspicion for over tourism. And Rhodes is supposedly the most heavily visited tourist island in Greece. Oh well.
So we're back in beautiful and relatively unspoiled Symi. Tomorrow we'll probably make a thirty mile jaunt over to Tilos for a day or two, then Astipalaia, then Amorgos, then Naxos, etc, etc.  As the weather permits, westwards!

Love to all,
Bill & Janet
Posted by Bill and Janet Wickman at 4:48 AM

Always great to hear about the latest…..hope all systems hold up till the next refit!
Best,
Walter
s/v Marnie
Virginia Beach

I enjoy reading about your travels. You have an easy writing style. I last saw you in Fiji, Musket Cove. You have pushed on much further than I ever imagined. I departed the cruising life, now enjoy it through you. JimFabrick, GECKO

Good to see the posts. Love the clarity and "truth" in your reporting of the goings on over there. Much more real than - "oh this is beautiful and this is great", etc.

We too like Symi, but that was 10 years ago, glad to hear it is still nice.
Enjoy your posts, especially the reality that not everything is great!
Chris and Nancy
sv AMULET, still in Malaysia (Tioman Island)


Nice update once again. Bill, you obviously were happy to have your first mate back on board, as well you should! Sounds like a great cruising ground, especially when you can avoid the tourists and bad marina management. It must have been nice to find your boat in the same place as you left it this time. Enjoy!