Well, I'm back at least. And I have been back for three weeks now getting the boat ready for the season to come. Janet arrives tomorrow night, the 5th of May, if she gets on her flight out of Portland to Amsterdam. It's looking pretty tight but hopefully she'll luck out and get a nice World Business Class seat on good 'ol DAL. Then she has positive space tickets, a 'real' person,  from AMS to Istanbul to Dalaman on Pegasus Airlines and surface transport to Marmaris.
The boat is ready to launch tomorrow morning. I've worked down two pages of "to do" lists. What's left "to do" is stuff that needs to wait until the boat is back in the water. That's not too much actually and with a little more luck no new disasters will rise up to smite me after launch. It's nice if the water stays on the outside of the boat for instance. Nice if the engine starts and very nice if we have both forward and reverse from the transmission. After years of experience you understand that nothing is a given in the boat business.
It hasn't been all work, I will admit. We have some nice friends here. The social scene centers on evenings at the marina restaurant which is really very, very nice with an excellent menu and cheap prices. No yachtie could resist.  One of my younger friends calls it the "old folks bar and restaurant" but even he admits it's the best place around. And the 'old folks' at this place are a pretty sprightly bunch. 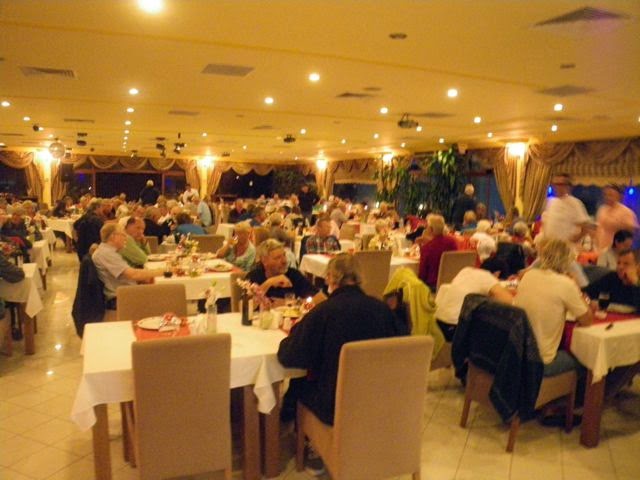 Today would be an 'interesting' day to launch. The wind has been blowing hard out of the south all night.  Gale warnings are posted at sea and here in the marina on the hard its blowing 20-25 knots. That's enough to make maneuvering in very tight marina quarters a little dicey. It's supposed to be calmer tomorrow.  When the big southerly blows  the wind off the North African coast is full of dust and the generally excellent visibility is restricted and everything, including my nice boat polish job, gradually accumulates grime. It'll wash off.
The plan for the year is not yet finalized but the latest thoughts include heading east a for a week or so along the south coast of Turkey and joining friends. Then heading over into Greece around Rhodes and moving west through the central Cyclades to mainland greece. Then north up into the Ionion and maybe the Adriatic before returning south to round the Peloponneses and return to Marmaris. We have considered continuing west to Sicily but the difference in boat accommodation between there and here in Marmaris adds up to about $3000 for the winter, about 50% less. Since this is a pretty good place to keep a boat, that's very tempting.
So please stay tuned and give our blog an occasional visit. We love to read comments. I apologize for the lack of great photos but the head photographer and her gear arrive tomorrow.

Posted by Bill and Janet Wickman at 10:23 PM

Looking forward to reading your adventures!!

B&J,
Nice to hear from you! I was thinking of you just the other day as I spread yet another coat of varnish on the 'Marnie'. As I read you blog I was thinking of all my favorite places round M. Is the outdoor lunch spot still in the center back of the mall area where the chef has the lamb on the spit with the hot burning coals in a rack behind? How about those bathrooms with fresh flowers, marble floors and carpets? I am assuming your practicing your negating skills with those carpet guys. My feet are on a beautiful carpet I purchased in that part of the world as I write. Miss you and looking forward to reading about you adventures this coming season. Happy to hear you are planing to keep the boat in the Mediterranean for a while. No point in brining her back till your finished and when you do bring her home you'll be finished wether you want to be or not….then it just golf!
Best,
Walter

Thanks for the nice update. We hope your plans to head south and east to visit friends works out! We hope to post our blog soon with pix from Capadoccia, but I am guessing they will look exactly like your pictures from Capadoccia. Love...

If you head up to the Adriatic our routes might cross this summer. We will be rushing through the Ionian in early June, then Adriatic until mid-Sept. Give us a hail if you see us and we will do likewise.

Nice update Bill. I'm jealous. Might hit you up for a little time on the boat this summer. We'll see what happens on the home front.

Wow, thanks for the Blog info and update....looking forward to keeping up with you now. Sorry the visit in the fall didn't work out. We went to Dubai over Christmas and just got back from Central America (Nicaragua) so as you can tell the Travel Bug has infected us too! - Turkey is only a short flight away, would be cool if I could find a cheap weekend flight and hook up with you incase your landed/stranded there for a few days!!! Love Carmen