One Damned Island After Another

I'm so confused. Amorgos, Naxos, Santorini, Mykonos, Tinos, Syros, what day is today and do I care? This is tough duty.
Actually it is Tuesday the 3rd of June, 'Happy Birthday' to my Aunt Beth who is ninety today.

And we're at the Finikas Harbor on the island of Syros. Its a lovely and very quiet spot after the rather bustling time at Tinos and the zoo at Mykonos. Its also an overcast day with light rain showers and its supposed to blow a bit this afternoon, maybe twenty-five to  thirty knots out of the east. Not a bad day to head further west but we haven't seen much of this place yet and we now intend to take a little island tour tomorrow when the light will be better for picture taking. Ermoupolis is the main town on the island, the 'capitol' of the Cyclades,  but not such a good place for yachts. We're securely moored in this tiny harbor with a very efficient harbor master watching over the place. Its a busy time of the week for bare boaters coming out of Athens and the hazards associated with them but we've got competent boats alongside and no worries.
We departed Amorgos, where I last updated this blog, and sailed, yes indeed we had a very nice sail, over to Naxos. That was the first decent sail of the season. The rest has been pretty much motoring. 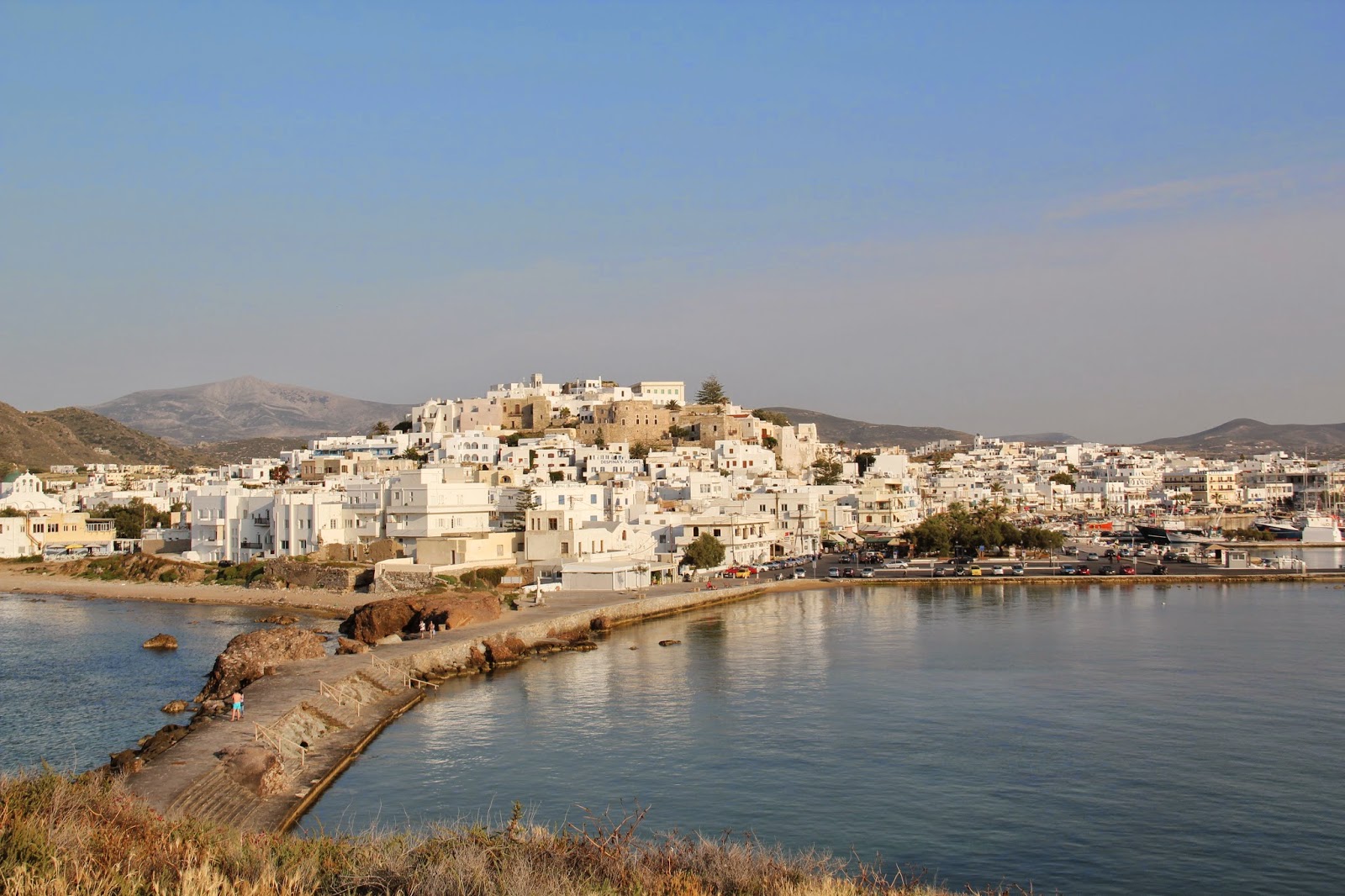 Naxos is a very nice island and Naxos town is a crowned by the usual Venetian castle converted over the centuries into a maze of arched passageway streets overflowing with Bougainvillea and Geraniums. The island is the usual rugged mountainous landscape but also has some fertile inland valleys with real agriculture from wheat to potatoes to vineyards. The interior villages are lovely and unspoiled. There seems to be a whitewashed chapel on every mountain peak. 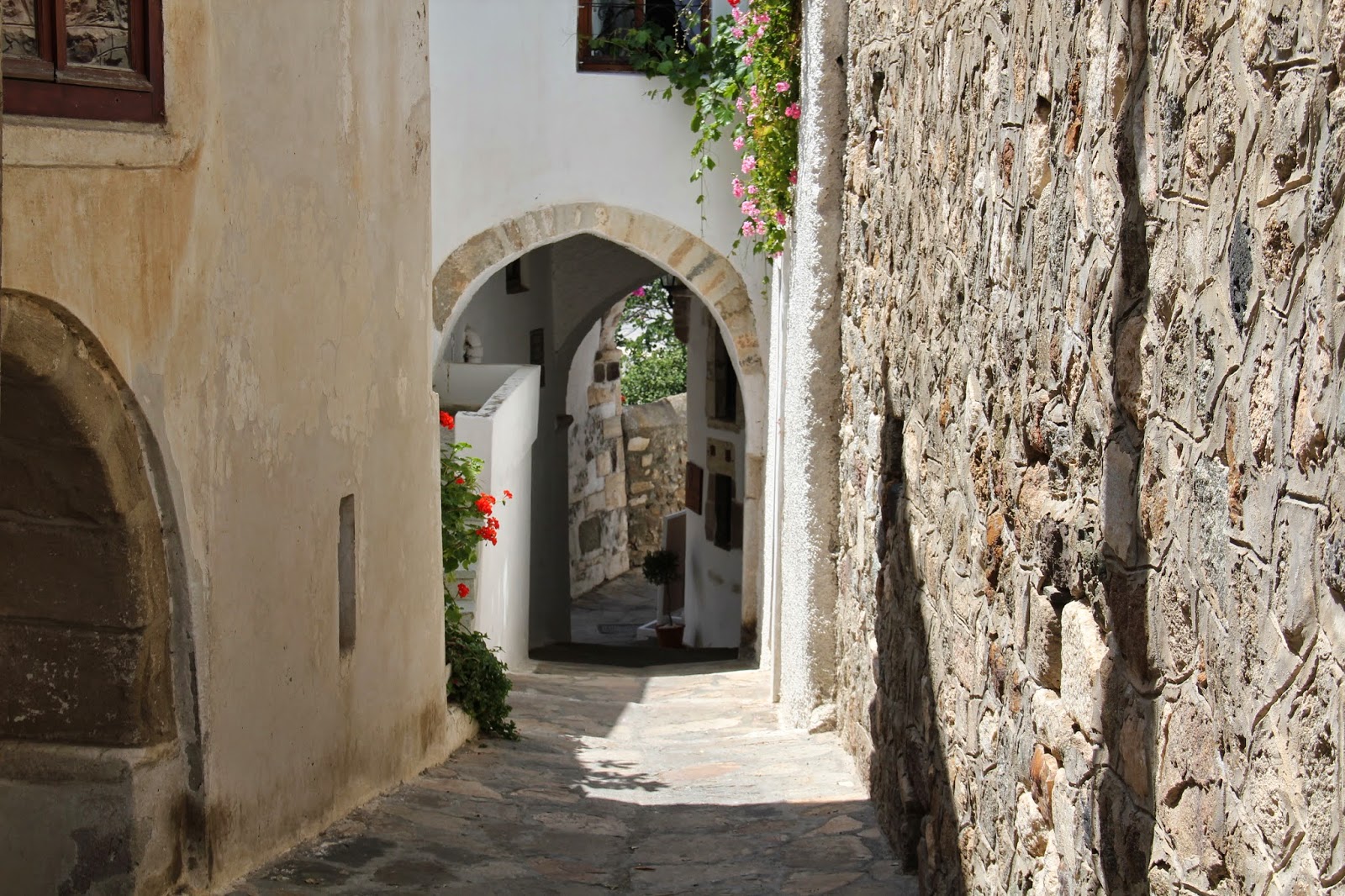 We like Naxos and spent six days in the harbor. Including one afternoon where a squall line came through with sustained winds of over thirty-five knots and gusts to fifty-five. This can cause real havoc in a tightly packed "marina" and the scramble was on to get out maximum fenders and extra lines ashore. Despite all the excitement, when it was  over everybody seemed to come through without damage. But there were about four hours of high anxiety.

Naxos was also our point of departure for the ferry to Santorini. There is considerable doubt as to the feasibility of taking a boat that draws eight feet into the one anchorage at Santorini. Since we got engaged there about twenty-five years ago and wanted to have a little return pilgrimage the ferry seemed just the thing to do. We caught the 0715 departure and returned to Naxos that evening and Santorini is still lovely. The main town of Thira is to be avoided as one big tourist trap but you can walk along the edge of the caldera north a few clicks to Imerovigli and further to Oia. Those places are more developed than they used to be but remain  in character and beautiful.

The views out over the caldera are what Santorini is all about and they are timeless. We had an excellent lunch and a nice walk and a small but memorable tourist rip-off from a patisserie. All in all it was a good and worth while trip. We'd still recommend Santorini as a place to visit, just stay out of Thira as much as possible.

Mykonos should probably just be avoided entirely unless you have some specific interest. I was there with a buddy diving many years ago. Janet and I were there a few years later. It was a bit of a zoo then but its completely beyond help now. Its overwhelmed by millions of visitors a year from cruise ships and a constant stream of international flights. The once beautiful town of Mykonos has been engulfed by the modern version of Cycladic architecture. They've retained one stretch of waterfront and dubbed it "little Venice". Its like a fat white tiger in the zoo. Yeah, its real,  but it bears little resemblance to anything you're likely to encounter outside the 'zoo' and has few of the attributes of the wild beast. The "marina" sucks, although "Mathews Taverna" above the marina was actually very good.  There's no reason to ever go back for us and no reason for anyone to go at all except, perhaps, to say they've been to Mykonos.
But from Mykonos it was a short motor up to Tinos and a totally different experience. Tinos is plenty bustling with tourism but its ninety-five percent Greek tourism and the town and the island are for real. The main rational for the Greek travel to Tinos is religious and that is centered around a kind of Greek Orthodox "Lourdes" where pilgrims come to worship and hopefully be cured of their ailments by a sacred icon housed in the cathedral above the town.

This is a big deal and much of the business of the town centers around services for these pilgrims. There's even a carpeted path extending from the waterfront the half mile or so up the steep hill to the cathedral so that pilgrims who decide to crawl on hands and knees, a sign of devotion to the icon, can be a little less battered by the marble street.

And in Tinos, by the way, all the streets are paved with white marble. So Tinos is very Greek, business and religion merged conveniently. A Greek Air Force pilot friend of mine once explained it thus:

Of course one memorable place in Tinos, only Greek in that it coincides with the well developed Greek sweet tooth, is the Haagen Dazs cafe which just happened to be fifty feet across the quay from our mooring. It is truly a well run and very real Haagen Dazs place and the "Brownie Explosion" I had there very shortly after arrival was a pilgrimage rewarded.
So with some regret we left Tinos for a sixteen mile "passage" over to our present position on Syros. The wind is continuing to build as forecast. There's an occasional light rain shower. I got a hair cut this morning and look pretty darn dashing. Most of the charter boats have left for points east and are out there getting pounded. Janet's working on her photos and we're holed up warm and cozy. Life is good!

Posted by Bill and Janet Wickman at 4:41 AM

Liz and I were just in Turkey April/May. Didn't realize you were back on the boat. Happy trails: Mike & Liz