There are 14 million olive trees and 90,643 Lesbians on the island of Lesvos. 14 million olive trees by a count of the EU which is apparently trying to convince the Lesbians not to cut them down by offering a Euro a tree to keep them, or so we're told. The Lesbian number is according to the 2001 Greek census that seems to be the latest available information. Even by the very high standard of Aegean islands Lesvos is  beautiful. It's the third largest island in the Aegean and has a rugged and mountainous aspect  with endless olive groves in the lower terrain and  pine forest where the olives no longer can be grown.
Of course every citizen of Lesvos is, by definition,  a Lesbian. And the term came to be applied to women loving women from the poetry of Sappho, the  Greek poetess born about 612BC on Lesvos who's lyric love poetry was considered the greatest ever by the ancients. Only fragments remain but much of it was directed towards other women, thus the origin of the term. An example:

'Godlike the man who
sits at her side, who
watches and catches
that laughter
which(softly), tears me
to tatters: nothing is
left of me, each time
I see her,
….tongue numbed; arms, legs
melting, on fire; drum
drumming in ears; head-
lights gone black.'

Good stuff!  I always kinda wanted to be a Lesbian.

And the island is exceptionally beautiful. We left Ayvalik, Turkey and two hours later were being  whistled over to the customs dock in Mylilene the capitol of Lesvos, to officially check into Greece. The check in was easy and although there is a marina in Mytilene it has little to offer so we went up to the city quay and stern tied as planned. Mytilene is bustling and busy, a college town, a bit of a tourist mecca and an ancient city of renown.
The quay was noisy with the main traffic of the city passing by and the trendiest bars and clubs on the island lining the wharf. But it also has its charms. The architecture is lovely and old mansions line the city front. There are a couple outstanding and rather unusual Orthodox churches and the very usual massive castle with  its history of multiple occupations and reincarnations from Hellenic to Persian to Byzantine to Ottoman. People are friendly and gracious and very helpful. For instance, I wanted a spare alternator belt after changing out belts at 1000 hours as recommended by Yanmar. No such animal available, apparently. But the guy in a dive shop near the quay who spoke just a little more English than my very rudimentary Greek put me on the back of his motorcycle and off we went into the hills of the city to a shop where just about every belt for any engine ever made was hanging from the ceiling. This was great fun for all concerned and one more little reason why I've always loved the Greeks.
We rented a car for a day and drove around the NE third of the island just sight seeing. Roads were better than expected and it was a lovely drive. We reconnoitered the town of Molivos (or Mithimna) that we planned on for a next destination. We picked up a young guy hitch hiking who is a PHD candidate at the university and who's English was good enough to tell us about the EU's EuroPark program, obviously his passion. We had good ice cream in the cafes and gyros off the street.
Mytilene was pretty nice but Molivos is better. In fact, Molivos may be one of our favorite towns from anywhere, anytime. It's a gorgeous example of a Greek-Turkish-Greek coastal mountain village with another rugged castle at its peak.
There are a few vehicle roads in town but most is foot traffic only and the terrain is so nearly vertical that almost all dwellings have a spectacular view out over the Aegean. If you keep going up hill you reach the castle. If you keep going down you reach the sea and the port. In between you can enjoy being  lost in a maze of steep cobble stone sidewalk-streets. 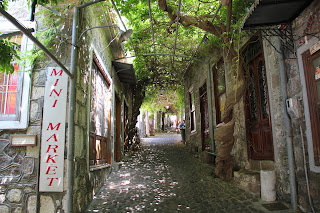 There are tourist shops and some low key tourism but in this case it just adds to the variety of the town. There's a historic preservation act in place, we're told, and I hope it stays in effect. The buildings are all native stone, some white washed , and there are many with overhanging Turkish balconies. We've had lovely meals with a great view over the bay at every restaurant and we've walked 'streets' that we might not be able to find again. It's all quite lovely. 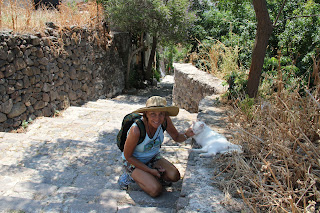 Years ago I used to think about retiring to a village on some Greek island and although that was pretty much a pipe dream, and although I'm pretty happy where we're at, if that ever happens, Molivos might be the place.

But tomorrow may be the day we move on. The weather rules and it's been blowing pretty much on the nose, the NW, for our next destination, the island of Limnos. Tomorrow the winds are supposed to veer around to the NNE for a day or so and then fill in again stronger from the NW later in the week. So we plan on being outta here at day break for the sixty mile trip to Limnos. Pretty scary actually, we haven't been out of sight of land in quite a while. Wish us a great sail.
Love to all,
Bill & Janet
SV Airstream
Posted by Bill and Janet Wickman at 5:18 AM

How fitting, eh? Say hi to Jason if you see him.

LOVE it!! I've always wanted to go to the Greek Islands. Now, we just have to get there. Enjoy! Love the blog.
Colleen & Tom
s/v Mokisha