Return to the Halkidiki

We left Myrina with a forecast for good sailing conditions on the forty mile 'passage' up to the tip of the Athos Peninsula. The forecast was spot on and we had a close reach on starboard tack all the way in company with First Light III. Since we actually 'sail' a relatively small percentage of our time in the Aegean I'll try to attach some proof.

Any of these photos can be viewed full size by clicking on the image.

Mt. Athos rises directly out of the sea to about 6700' as a giant pyramid of granite and marble. Very beautiful! And its just the tip of the peninsula which belongs to the Greek Orthodox church and is entirely inhabited by monks of several communities living in spectacular monasteries dating back to the ninth century.
No women have ever been allowed on Athos since that time. Special permissions are required for any visit. When I first flew over this area on some low levels in the eighties it was obvious the monasteries were at least in a state of deep limbo and probably decay. There were fallen in walls and buildings were deserted. It was possible to believe this place might cease to exist in another hundred years. 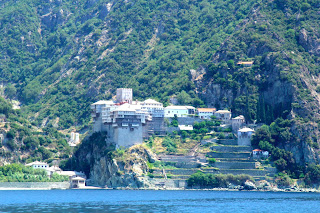 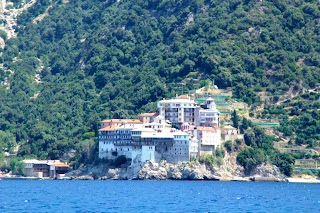 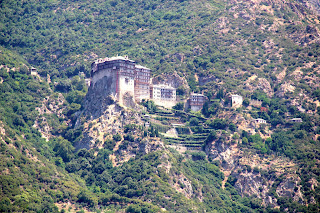 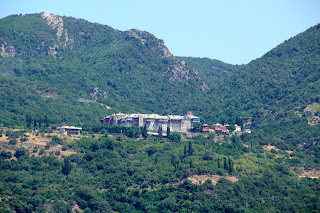 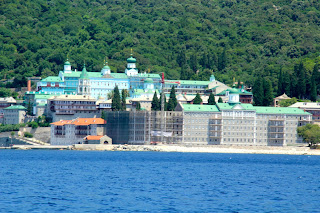 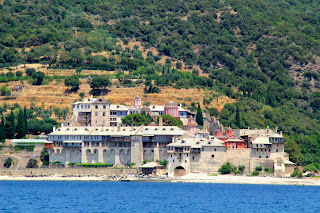 But the opposite has occurred. Now everywhere there is new construction and old buildings have been repaired. Where there was once no evidence of modern life, no vehicles, no sign of electrification, and no roads there are now solar panels visible above monasteries and a few vehicles on real roads. There's been a lot of construction of all kinds and its obviously a viable and growing society. Its all very interesting but most of all the monasteries and the peninsula itself are spectacularly beautiful. Vessels are required to stay at least 500 meters off shore. Our winds had died immediately in the lee of the mountain so we dropped sail and motored up the coast to an anchorage north of the regulated portion of the peninsula and spent the night.

Next day was flat calm so we motored over to the middle peninsula, Sithonia, and spent a night anchored in the bay of Dhmitriaki which was scenic, quiet and uncrowded. I was a good start to a long awaited revisit to the Halkidiki.


I'd have to do some real searching to find out when I was last here, probably the early '90s.This area is the three peninsulas which jut out into the NW Aegean from the mainland of northern Greece. They are, from west to east, Kassandra, Sithonia and Athos. Its an exceptionally beautiful place, mountainous and wooded with some of  the best beaches in the Med.  I first came here in 1981 when I was flying out of Thessaloniki. There was little development and with any effort at all you could have a lovely spot all to yourself. Over the years it has changed of course and now those deserted beaches are occupied by crowds of eastern European tourists. Its not a long drive from Bulgaria or what was Yugoslavia and now that those people have some money and freedom to travel they do it.


So Sithonia is much more developed and those lovely spots are mostly occupied by hoards of eastern European beach campers. Its still a beautiful place of course and Porto Koufos, a spectacular anchorage on the SW corner,  is not over developed yet.

The taverna that I used to enjoy in Porto Koufos   is still there, much enhanced of course, and with some competition, but still one of the very best sea food tavernas anywhere. We used it to celebrate Janet's birthday with Bernie and Di (of First Light III) and had a nice dinner.
Now we're in Nea Marmaris after three nights in Porto Koufos. We'll be here two nights and then move over to Kassandra and start the leg up towards Thessaloniki. Nea Marmaras is OK but there's a reason I remember nothing of it from years past, there's not much outstanding to remember. And for the first time this trip we've encountered a place totally devoted to tourism and in the heat of the battle. The 'season' is in full swing and these folks are trying to make their bucks, or euros, while they can and they're already getting tired of the whole scene. They're a little jaded and I have a feeling they won't be their friendly laid back selves again until the 1st of September when the 'season' seems to come to a very immediate conclusion.
Tomorrow we head east to Kassandra and a port around the SW tip of the peninsula called Nea Skioni. Should be a nice spot.