Up The Aeolian Coast

We're in Ayvalik, Turkey enjoying a little marina life before heading off into the wilds of Greece tomorrow morning. This is as far north as we intend to come on the Turkish coast this year. Directly to our west, very lovely in the distance,  is the island of Lesvos where we'll check in at the town of Mytilene.
Since our last update we did an Ephesus tour from Kusadasi with Laura and Mark of Sabbatical III. The tour was one of the few disappointments we've had this trip. The idea was to see and experience the ancient city of Ephesus. The day long 'tour' allocated an hour and half to Ephesus.

There was about a half hour spent at what is called "Mary's house" which some have said is the house where Christ's mother lived her last days. Mary's house, sorry to say, struck me as a religious tourist trap. The rest of the day was a 'tour' of various marketing attempts to get us to buy ceramics, leather goods, etc, etc. The classic tourist BS. Even the hour and a half in Ephesus was a rush job and it seems the route through is laid out to push as many people through as fast as possible and gather up those Turkish Lira for the government. We should have known and Ephesus deserves better.
We left Kusadasi heading north, ever northwards, to Sigacik, which is a nice town with a nice castle and no crowds. First Light III was there and with them we were invited to help Bill & Bunny Bailey of Onset celebrate their fiftieth wedding anniversary. It was a great evening and many thanks to Bill & Bunny.
From Sigacik, north again to Cesme, another nice town with another nice castle. And this one has a Burger King! And yes, I dragged Janet to Burger King. She didn't seem to mind too much.
From Cesme we slipped over to the SE corner of the Greek island of Lesvos for a nice quiet anchorage in Ormos Tarti. Not really anything there except pretty country and a couple tavernas on the beach. We had a major thunderstorm that evening. This was a classic midwestern thunder bumper that rolled in over the anchorage out of the northwest. Big roll cloud out front followed by a cold gust front and light to moderate rain and lots of lightning. We shut down the electronics and put the computer in the oven. Then the hail started rattling down, heavy hail up to about 3/4". The sea was alive, amazing,  from the splashing of the hail and all we could do, of course, was sit under the dodger and watch and listen as the hail banged into our solar panels, dodger and nice new teak decks. That and wonder how much damage was being done. The hail lasted almost half an hour and then died out followed by the real rain shafts of intense rain and winds estimated at over fifty knots. Quite the storm and luckily we had good holding and didn't move an inch. I wouldn't have wanted go out and re-anchor in the hail! And luckily the hail stopped before the high winds began. We had NO DAMAGE from the hail. If it had been wind driven hail I believe the result would have been different.
Bernie and Di on First Light III joined us the second night and we had a couple  nice dinners ashore. The following day we both went over to Bademli Limani on the the Turkish coast and spent a couple more days enjoying a nice anchorage and the nice village of Bademli. No tourism here! Just a quiet Turkish seaside/rural atmosphere.
It looked like a Meltemi situation was developing. This is the classic Aegean summer northerly wind that can blow for days and make travel northwards less than pleasant. So we upped anchor after two nights at Bademli and motored the last twenty-five miles up to Ayvalik and what is called "the lake". The 'lake' consists of a number of almost completely land locked bays and anchorages with generally excellent shelter and holding.
The towns of Alibey and Ayvalik across from each other offer some mildly urban comforts or you can choose places like Poroselene where there is nothing but an ancient watch tower above a quiet anchorage with crystal clear water. So over the last week we've done several anchorages sitting out the Meltemi. We rented a car and visited the ancient  city of Pergamon and had the kind of experience we'd hoped for in Ephesus. We've had some nice meals ashore and got ripped off one night paying 70TL for one small fish. Oh, well……. 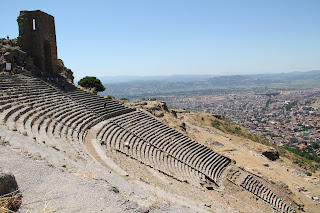 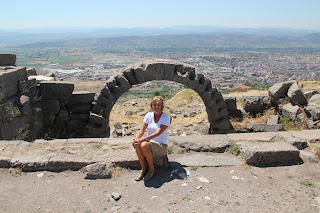 Today I did the bureaucratic dance and officially checked out of Turkey. No problem and everyone was  very accommodating, even the harbor master who had forgotten his very official stamp at home . First Light III and  Onset are here and we're all getting together tonight for a major game of "Mexican Train" followed by dinner in Alibey. Should be great fun.
And tomorrow we'll take on a little diesel and head for Mytilene. Much as we've enjoyed Turkey and the Turks we're looking forward to three months in Greece. I've always loved the country and the people since being based out of Thessaloniki back in the '80s and that, at least, has not changed.


Posted by Bill and Janet Wickman at 5:08 AM

portionBurger King, huh. Ah well, How much reigonal food can you eat before reaching for a burger? Americans, eh?