Certainly three of my favorite places. The Halkidiki may have to revert to "once was" as a favorite place. Much of it is now too crowded during the height of the "season" to retain its old charm. Thessaloniki is still one of my favorite cities and in some ways better than I remember it from the last time we were here twenty years ago. And Meteora is one of the great "bucket list" sites, as visually and culturally appealing as anywhere in Europe.

We've been in Saloniki (Thessaloniki) for a week now and it been a great visit. Who says you can never go home again? This city was my home for about a year and my destination for many visits later on. It hasn't changed all that much. Visually its much the same.

The people seem more western and the atmosphere in some areas of town is more chic. Its probably cleaner than is was in the eighties and somehow the traffic doesn't seem so bad. The old daily easter egg hunt for a parking spot seems a little easier. The down side is that the Greek economic difficulties are very apparent in many of the commercial portions of the city. There are many, many closed shops and empty store fronts. But to me Saloniki has always been a busy,  bustling and attractive city by the bay with a rich history and a sweet people and that remains.  I've had some very good times here and Janet had visited before with me in about 1990 and liked it as well. The marina at Aretsou is nice, very well protected and very quiet even though there are plenty of tavernas on the street above us and the evening volta takes in the marina until at least ten every night.
To catch you up on our progress to this point, we left Nea Marmaris in  company with First Light III on another motor voyage (no wind) across the gulf between Sithonia and Kassandra and around the south cape of Kassandra up to the village of Nea Skioni. It was nice to see that the southern portions of Kassandra (south of Paliouri) were as lovely and unspoiled as they have ever been and that our old dive spots were still  isolated and lovely. Nea Skioni proved to be a nice fishing village with some tourism that did not detract from the charm of the place. We had some nice meals and prowled the waterfront. Bernie and Di got in some bike riding.
We spent two nights in Nea Skioni and pushed north to Nea Mouldounia and that town was a disappointment. Its suffered dramatically from the Greek economic problems, the tourist scene was not that attractive and the place was depressing. We left without regret for the final motor north to Thessaloniki.
For those of you who are cruising the Aegean or contemplating the act I have to throw in a few words about Heikell's "Greek Waters Pilot" on Thessaloniki. I have a lot of respect for Heikell and his publications. They're  very useful. But his write up on Saloniki is just plain wrong, way wrong, and he should correct his book. I don't know when he was here, probably long ago, but his "first impressions" bare no resemblance to the city or the waterfront to be found today. If you're reading Heikell and writing off Saloniki because of his statements you're doing yourself a disservice and should reconsider. Contact me if you wish, I'll hazard to say I know this place far better than Heikell.
……..anyway, we arrived in the marina at Aretsou without difficulty, got a nice secure berth with First Light III nearby and settled in for exploring old haunts, renewing old friendships, and a little land travel. We rented a car and did a little exploring trying, without too much difficulty, to find our way around after twenty years away. Getting lost in Thessaloniki was always fun. Ultimately, if you go down hill you hit the sea. If you go up hill you reach the castle walls. In between, well, enjoy the city.
Next day we drove down to Vergina to tour the new museum built directly into the tumulus over the grave site of Phillip the 2nd, Alexander the Great's father. The unmolested tomb was discovered back in the 80s and the goodies within have made for a spectacular display. From Vergina we continued south into Thessaly to Meteora and found a really nice hotel in the village of Kastria.
If you remember the old James Bond movie "For Your Eyes Only" the monasteries at Meteora figured prominently in the movie. They are spectacularly beautiful 15th century buildings set on rock pinnacles far above the villages below. Until recent times most were only reachable by rope hoists or wooden ladders up the rocks. Now there are decent stairways cut into the rock approaches and its just a matter of placing one foot ahead of the other until you reach the entrances. And its well worth the climbs. The views above and below are world class. 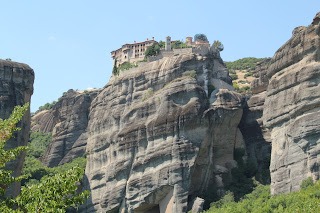 The monasteries themselves are lovely orthodox style masonry with tile roofs and spectacular over hangs. The interior decoration of the churches within the monasteries are wonderful and give an idea of what might have been commonly found in the even older orthodox churches had the iconoclasts not had their way.
We spent a good afternoon and a comfortable night in our very small but very nice hotel and explored around the next morning before driving the two and half hours back to Saloniki. Anyone contemplating a little land travel in Greece should make Meteora a priority. Its a great place.

Bernie and Di had family show up the next day as planned. Their son Simon and his girl friend Noelia were eager to get going south for the Sporades so we said goodbye to them for a awhile and took to meeting up with old Greek friends from too long ago. We visited with George Kizas who still owns the Villas Kiza where I lived back in the eighties.
We spent time on the boat and in the Halkidiki with the family of Vassilis Zavalis who was a good friend who died twenty years ago. We have always stayed in touch and we had a nice afternoon with four generations of the family. We've driven around the city getting semi-lost and having nice meals in view spots over the bay. We visited the very excellent archeological and Byzantine museums. The only  surprise, and it wasn't really a surprise, I'd heard about it, was the level of development south towards the Halkidiki from Thessalonki. What used to be a a rural two lane road is now a four to eight lane super highway with stop and go traffic on the weekends. The sleepy villages near where I used to live are unrecognizable with multi-story development being the rule. I used to have a nice ocean view from my pad. No more, the view is completely blocked by new construction. That's life. Much of the good stuff still remains and its been a great visit. 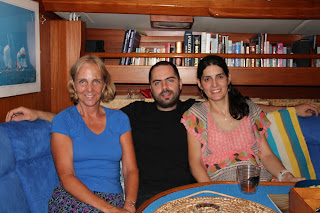 We're shoving off early tomorrow morning, heading south. We'll spend a night in Nea Skioni and see more Greek friends and then head for the Sporades and we'll back in the islands, man. We plan to meet up with Bernie and Di and start the final phase to this years plan.

Posted by Bill and Janet Wickman at 8:02 AM

I enjoy reading your posts Bill. Hope all is well. I bet your ready for a round of golf.

As always your blog is very interesting and informative ..... it is so great that you have Greek friends. It must make your stops very special. Thanks for all the info and great pics!