In Darwin, Catching Up

Ahhh.....the joys of civilization! Unlimited hot water showers! Ice cream! Restaurant fare. Now that we're at Cullen Bay Marina we step off the boat to whatever service we require. We don't do the damp dinghy dance to a sandy, tidal shore dodging bomies and crocs and returning in the wind, through the chop, at night. No more wet behinds, for awhile. Life is good! 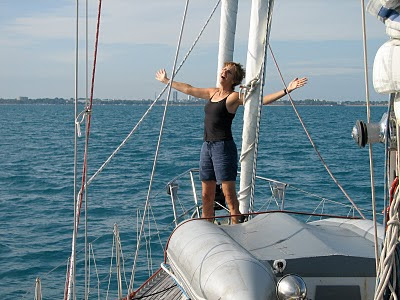 Darwin is very nice. It's almost worth the journey. We left Siesia with the usual 20-30 reinforced trade winds blowing from the ESE with hopes for a relatively smooth ride for 300 miles across the Gulf of Carpentaria in the lee of the huge Cape York Peninsula. Faint hope soon dashed. Of course there was enough wind to kick up a decent swell as soon as we cleared shore and since the gulf is shallow and since the tides are very much in evidence we ended up with a very steep, short duration and confused sea. Nothing dangerous or scary but about 8-10 foot seas at about six seconds and very chaotic depending on the tide. Made for a very uncomfortable ride. After a couple days this gets old. It was best described by another boat on the passage as crappy crap. Again we just flew the genoa and reefed it down when it  blew hard, over 35 occasionally, and put in 175 mile days with little effort other than discomfort. 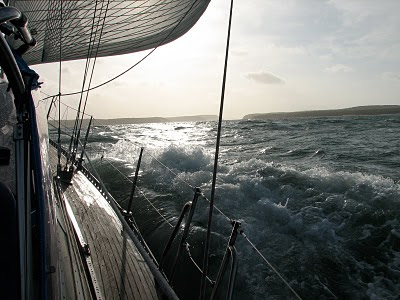 Once across the gulf and past the Wessel Islands it began to flatten out a little and by the the time we were north of the Cobourg Peninsula it was actually quite nice but the winds were light. We went into Alcaro Bay just before Cape Don to wait a few hours for a favorable tide and then spent the night motoring across the Van Diemen Gulf, through the Vernon Islands and the Clarence Strait and into Fannie Bay at Darwin by mid morning. Nothing like radar and dual GPS chart plotters for night navigation in restricted waters. What wonderful stuff. So it was a five day, 720 mile passage to finish off the more than 2000 nautical miles we've covered since leaving Bundaberg. We deserve a break. 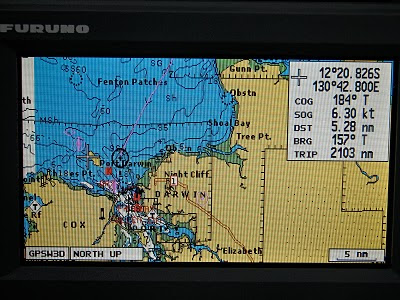 We spent a night at Fannie Bay due to the vagaries of the Australian bureaucracy and then entered Cullen Bay through their lock system. Tides at Darwin can exceed 7 meters so the marinas all have locks to maintain a little control over depth. Cullen Bay Marina is modern and convenient in all respects. Darwin is pretty and nice with a small town atmosphere. In a strange way it reminds me a little of Anchorage. It's about the same size and since it's so isolated it's the center of everything for a couple thousand miles. It's very maritime oriented and the frontier is very real. This time of year, winter of course, it's warm and a little humid but very livable. Not like Anchorage. I'm not so sure I could handle it here in the summer. It gets ungodly hot and humid we're told.

So we've been socializing with friends who have been arriving. Many are heading up into SE Asia with us as part of the Indonesian Cruising Rally. There's a big Asian population in Darwin and we've been enjoying some good food. All of Australia is expensive and Darwin is very expensive because of it's isolation.  Just can't be escaped. We're doing a few boat projects and planning some land travel for next week and getting ready to get ready to start thinking about departing for Indonesia. Right now we want to decompress and relax rather gently....ahhhh...that feels good. 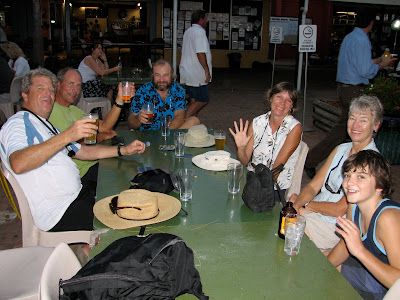 The one frustration has been with our internet provider, Suddenlink. Cequel Communications, which does business as Suddenlink, has decided that certain areas of the world just harbor too many phishers and spamers and they won't allow  IP addresses  from these places to access their servers to send or receive emails. No notification, etc. if you're traveling those places, which include a hell of a lot of Asia, you just happen to be SOL. So when I found we had 390 emails on their servers I could not access and since I couldn't send emails using my own ISP, lets just say I was frustrated, very. Thank you Skype for nearly free world wide calls. Thank you internet for giving us ways to hunt down just about any senior executive at any public company. Thank you, personal assistant to the CEO of Cequel, for helping work around this situation. No thanks to the persons who have instituted this ridiculous policy. It seems the world wide web stops at the western shores of North America as far as Cequel is concerned. Anyway, if you'd like to contact us our 'suddenlink' emails will be forwarded to our new Apple ISP address at: wwickman@me.com
that's MAC's MobileMe server. We'd love to hear from you.

So the plan is to be here, or on land travel, until the 24th of July. Then we head for Kupang in Indonesia and work our way through the southern reaches of Indonesia to Komodo, Lompoc, Bali and up through old Java and probably be in Singapore in the first part of October. Then into Malaysia and Thailand by November. Then we'll see. Janet will certainly come home and I may hang around for awhile to supervise boat jobs.

In the meantime..Love to all!
Bill & Janet
SV Airstream

Posted by Bill and Janet Wickman at 10:54 PM