Kupang and the call to prayer 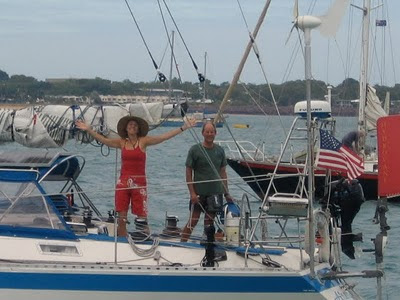 This will be sent via HF radio since we have not yet established internet contact here in Kupang. Sorry, no photos for now. Just not enough band width.

We had a good passage from Darwin. We've crossed the pacific. We're in the Indian Ocean now.

There was a fun start line affair with a nice sail out into the Timor sea. It got a little rolly. It got light and we did some motoring. Boats speed under three knots is about my limit of my patience if we have the fuel. Then it picked back up and we had a great spinnaker run for about fourteen hours. Of course we got to wrestle the thing down in too much wind at 2AM. We ran the rest of the way into Kupang under genoa alone.  We averaged 160 nautical miles per day which isn't bad cruising. Winds and seas were astern. 494 NM total. 74 hours. It was sunny and hot but the full moon was incredible. The atmospheric conditions made for the most beautiful moonlit nights I've ever seen. Quite unforgettable. 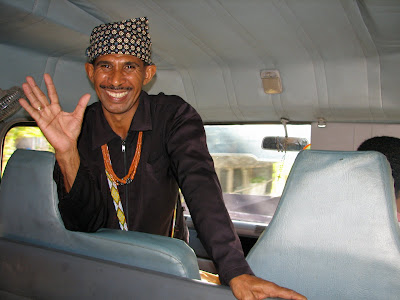 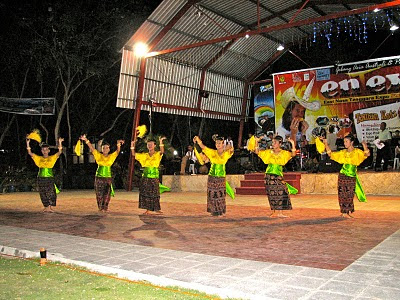 Kupang is where William Bligh and his men came ashore after the longest open boat voyage in history. One result of the Bounty mutiny off Tonga. For us, arrival in Kupang was without difficulty. The cruising community uses the word "drama" to signify things not going smoothly. We don't like "drama". Boredom is very welcome sailing out here. So I didn't say arrival in Kupang was without "drama".  It was dramatic in a standard usage of the word. Kupang, something tells me Toto,  is not Des Moines. Coming in after a few days at sea and several months in the western world Kupang is noisy, bustling, scruffy, dirty, chaotic, hot and humid and wet, windy and dusty all at once. Sunrise, "...where the dawn comes up like thunder." Sunsets are even better. The people seem a mix of Malay, Indo-polynesian, Melanesian, and Chinese with a lot of other stuff thrown in. Friendliness and sweetness are the social constant. The community seems to be predominately Muslim. The check in procedure was bureaucratic chaos streamlined a great deal by the organization of this rally. Everyone was very nice but we have more paperwork, far more paper, than I've ever before encountered on entering a country. 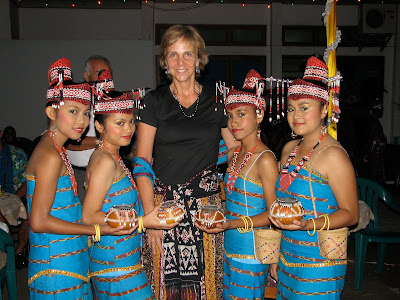 So we did our check in duties and had a Bintang (the local brew) at Teddy's bar (the designated cruiser hangout) and bought a sim card for the cell phone. Wandered a little of the town and then felt the crash coming. Post passage exhaustion had set in. Time to dinghy back to the boat and have a couple tacos for dinner. Watch a "West Wing" (we have the entire series on CD) with a stiff Captain Morgan and Diet Coke and sleep the sleep of virtue.

And at 0400 in the complete calm of the anchorage the full moon is beaming through the open v-berth hatch. It's cool and I've slept well. Janet is snoozing away sweetly. And the mosques in town issue the call to prayer. It's an other worldly and wistfully beautiful sound. A priestly hymn to the morning faithful. Makes me feel at one with the world. And then something I've never heard before. A short simple trumpet solo from some source, mosque perhaps? Much more a 'taps' than a 'revelry' and then two bells very clearly and then silence. A nice way to wake a city.

So now it's about 0630 and the city is up. The constant horn honking of the traffic has started. We'll go ashore and start further exploration. About half the fifty or so boats coming to Kupang have arrived. The rest will come in over the next few days. We have plenty of friends in the fleet. This will be fun.
Love to all,
Bill & Janet
SV Airstream
----------
radio email processed by SailMail
for information see: http://www.sailmail.com
Posted by Bill and Janet Wickman at 5:37 PM