At present I'm wedged into a comfy and hopefully secure spot where this laptop is unlikely to go flying across the boat. We've made very good progress the past few days and the forecast calls for at least another day or two of good NW flow before things get a little lighter. The grand strategy has been to stay in this nice NW breeze and make as much westing as possible without getting into the light stuff in the Pacific high, then jibe back to the south once we get into the northeast trades. With luck we can slide through the ITCZ (inter tropical convergence zone, 5-8 degrees north) and into the southeast trades and then reach off for the Marquesas. That's been working so far. The tactics have involved a little flailing around the first night getting through a small front and just changing sail trim and headings to make the most of things. 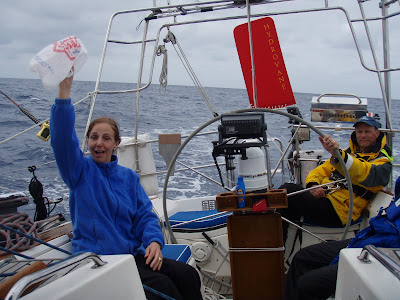 Bill Huber never gets sea sick, we all hate him, Janet and I were over feeling queasy by the second day and now Ken, who is getting his first open ocean experience, is feeling good. It's a very congenial atmosphere and I think we compliment each other well. The cold bite has pretty much left the night air and I think today it will actually get warm. We've been living in layers of fleece and foul weather gear and looking forward to nylon shorts and broad brimmed straw hats. We've had some decent meals and munchies are stored everywhere on this boat. Starvation should not be an issue as long as we keep the boat afloat, our primary goal.

At present we're on a beam reach, starboard tack, a reef in the main and the genoa furled about half way. The winds are 300 degrees at 15 knots and we're heading 200 degrees magnetic. Present position, N31.11.5,W126.16.1. Boat speed is 7.5 knots (which is hull speed) and conditions are pleasant but a little lumpy. We have a 8-10 foot swell from the NW and a foot or two of wind chop on top of the swell. The wind vane has done 90% of the steering since we left and this unit, called a Hydrovane, is doing a great job. We also have an electronic/hydraulic auto pilot but it burns electricity and does no better job. It's mainly for motoring, which we'll try to do as little as possible. We have a wind generator and solar panels for electrical generation. 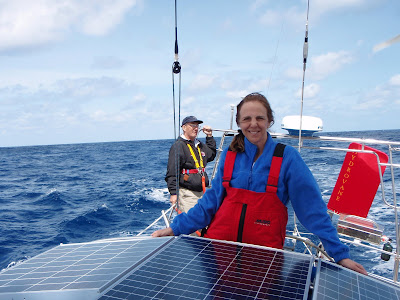 So we're making good progress and settling into this voyage pretty well. Thanks for your interest and emails. We'll send a few photos when we get to somewhere with internet access. Please just

All the best,
Bill & Janet, Ken Stiver and Bill Huber
Posted by Bill and Janet Wickman at 4:33 PM