Enroute to the Marquesas 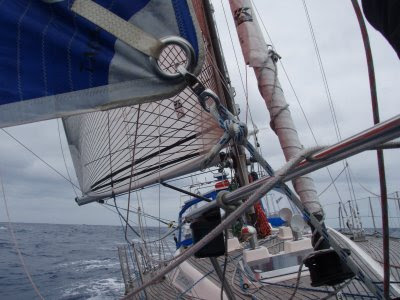 Who knows when this will get sent out. We've suffered an email break down. More accurately the USB cable between the computers and the pactor modem(the device which interfaces the computer and HF radio)has gone to where ever bad cables go. Although to be fair, it was an abused cable and shouldn't held accountable for it's inability to function normally. It caught between the nav station desk top and the nav station one too many times. Oh well, if you're getting this obviously we found some work around. 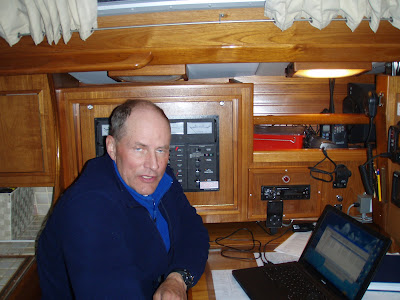 At present we're about four degrees north and 133 degrees west and definitely in the ITCZ. Winds have gone to the east and are much lighter. We've got hot weather and and occassional showers. With the winds no more then ten knots we're still making five to six knots on course which is pretty good. We may cross the equator tomorrow night or early in the morning. We're preparing appropriate sacrifices for Neptune. We're fishing. We're relaxing. We're fixing little things which are bound to go wrong on a long passage but haven't caused any severe problems yet. After replacing a pin in the mains'l headboard car we went for a little swim off the transom. Very, very refreshing. 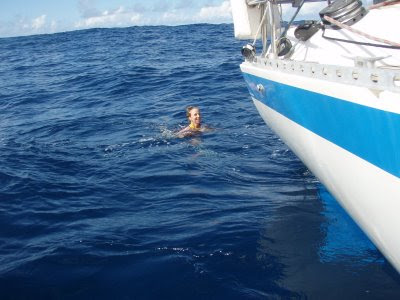 Everybody's getting in some reading. This is what you'd think tropical trade wind sailing should be like. The hope now is the winds we have don't get any lighter and that in a degree or two of latitude we'll be in the southeast trades and bingo for Fatu Hiva and the Marquesas.

Hope to get this off soon. 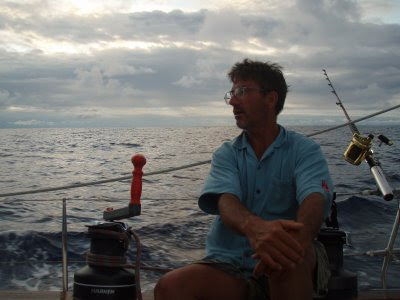 Well, we had a couple classic days in the ITCZ. Days which were full of fluky or no winds and scattered rain showers and confused sea. Very hot, sticky and unpleasant. Finally had to start motoring to get through. Yesterday morning there was a definite change in that we started getting a light but steady SE wind and the humidity dropped. We crossed the equator in light SE winds and a sweet rolling swell. Had an invocation to Neptune with appropriate sacrifices and a great swim over the equator. Drank some mimosas. Pizza for supper. Had a beautiful sunset and the first green flash I've ever seen. Very nice. The winds built over the day and by afternoon we were definitely in the trades, the temperature and humidity had dropped pretty dramatically although it was still hot. Wind direction has been a very consistent 110-130 degrees and 8-12 knots ever since and the sailing has been perfect. The wind vane is steering. The main, stay'sl and genoa are set and we're on a close reach doing 5.5-6.5 knots heading for the our destination. Right now we have hopes that this will continue for the next four days. All we need is a little fish on the line!

My apologies for the lack of communication but hopefully that is now solved.

All the best,
Bill & Janet, Ken and Bill Huber 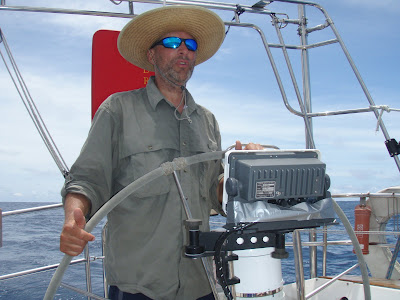 "Trade Winds"??? The term to me connotes steady moderate breezes and puffy clouds...consistent conditions. Ah, so what's with these SE trades? Since my last notes we've had nothing but either too little or, close to, too much wind from most every direction and about as much rain as sun. Our nice 180 mile days have dropped to around a hundred. I had thought we might make Fatu Hiva tomorrow but that was obviously the kiss of wind death because now it looks like three more days if we're lucky. Right now it's quite pleasant. Everybody is topside. Janet is officially on watch although the Hydro Vane (our wind steering device) is doing the steering, Ken is breaking out his inflatable deck chair (that will SURELY be the kiss of death), Bill Huber is doing a little sail repair job and I'm below writing to you. A hatch got 'not closed completely' during a nice run last night and a bunch of water came into the forward berth area, Janet's lair. All her stuff (and she has lots of stuff) got soaked and now much of it is on deck getting dry, hopefully.

I came on watch this morning in a rain squall with plenty of wind. We were blasting along at eight knots and my fishing reel started singing out loud and crazy. Something had found the hook and was heading for Mexico. I've got a stand up rod with 800 yards of 50 lbs test mono on an Okuma CG50W2 reel and it was almost gone before there was a huge splash way aft and 'whateveritwas' threw the hook. Oh well, it could have taken everything and then broke off. It's hard to get a sailboat slowed down and turned to fight a fish. So far we've caught seven fish but only kept two. We're out of fish meat and it would be nice to catch a nice Mahi Mahi or tuna today. 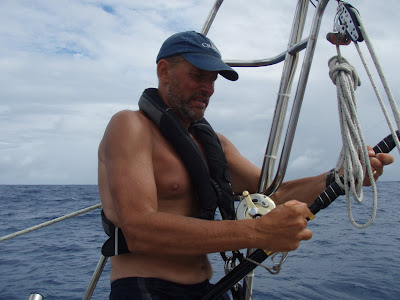 Bill H. made his famous ginger scones again for brunch. Absolutely the best scones ever! I feel like I've been so darn busy the past couple days I'm going to veg for a couple hours.

When we lost email contact we were unable to send position reports via Sailmail but I continued to submit reports through the Pacific Seafarers ham radio net every night. They post these positions on the Yotreps (Pangolin) and Shiptrak websites but the positions are reported by our ham call sign which is KI6IKE not our single side band call sign. So if you go to Shiptrak or Yotreps look for KI6IKE and that will show our position and I believe shiptrak will show all our reports. The Pacific seafarers net is every night at 8:25 California time for roll call but there's a warm up session beginning around 8-8:15. The frequency is 14.300 megahertz. There are net control operators on the west coast, in Hawaii and Australia and it's a very professional organization. Most of their stuff is oriented out into the Pacific but you might be able to listen in from North America.

Things are breezing up a little. Time to go to work. Love to all.

My whining about the lack of SE trades must have been heard favorably because they filled in shortly after and we've had a beautiful sail ever since. Winds from 90-120 degrees and 10-16 knots. Gentle rolling swell about six feet from the ESE. Temperatures in the nineties by late afternoon but cooling off during the night. Much less humidity. 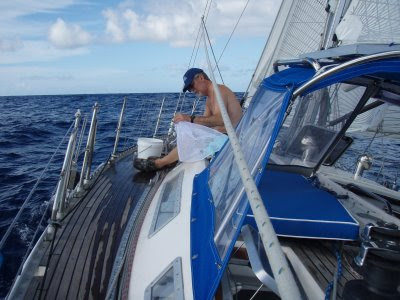 Caught a small Marlin yesterday. Or at least brought him to the boat and shook him off, didn't want to kill him. Beautiful fish about five feet long. He ran and jumped nicely but seemed to wear out fast. I think it was a Striped Marlin because of the colors which were a spectacular blend of iridescent blues. Great fun!

We have 129 nautical miles left to go having covered 3436 of the same since leaving the dock. We've been slowing down at night because the bunk house where Bill and Ken sleep gets pretty hot with the hatch closed and pretty wet with the hatch open fully powered up with all sail. With luck we'll make landfall early tomorrow morning. I think that will be a thrill for all of us. It's been a great sail but a nice long bath under a tropical waterfall sounds pretty good as well.

All the best,
The Crew!

Posted by Bill and Janet Wickman at 7:46 PM