WHY is there snow on our decks? Why am I so stinking cold? Because its 26 effing degrees Fahrenheit in Victoria, British Columbia and its been snowing, that’s WHY! And our sweet warm weather boat has just been offloaded after shipment from Golfito, Costa Rica to Victoria. I’m sure the boat is in shock and although we’ve been in Vic for a couple days awaiting arrival, and know the forecast,  its still no small irony that this is the coldest day of the year. I was really worried that it had been cold enough, long enough, that our fresh water plumbing might have frozen and some of the copper tubing might have split. That could create a lot of problems.
This all started a few months ago when we realized that we really did not feel like bashing up the west coast of Central America and the USA to get home. We’ve done much of that coast before, some of it several times, and the thrill was gone. When we began this little voyage almost nine years ago I had a sinister ulterior motive in that I wanted to complete a circumnavigation. Then the great pirate panic of 2011 took place and some friends got killed in the Gulf of Aden. We considered many alternatives but ultimately we wanted to cruise the Med and we couldn’t find a practical way to sail the boat to that sea. So we shipped the boat on SevenStar Yacht Transport to Marmaris, Turkey.
All this is outlined in the blog posts from those years. We have no regrets about that decision but it did mean that a circumnavigation was no longer a possibility. So now, in 2016, with the claim of a circumnavigation no longer at stake the joys of Central America and the Mexican Riviera couldn’t overcome  the unpleasant anticipation of the bash northward against wind and current. SevenStar had a ship heading north with stops in Golfito, LaPaz, Ensenada and Victoria, BC. They dangled a pretty good deal on a shipment all the way to Victoria and we bit.
So we enjoyed our time in Golfito waiting for the ship. The motor vessel Happy Dynamic, the SevenStar ship,  arrived on time and loading was professional and without incident. We said goodbye to the staff at Fish Hook Marina who were absolutely first class and  had become friends, took a car to San Jose and caught a flight for home. Bye, bye tropical world. 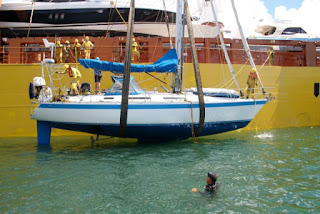 Home was nice for a week. But too soon we packed some boat stuff into the back of my pickup and headed for Victoria. Stops in Portland to spend a night with friends and Seattle to arrange selling logistics broke up the trip. We took the Victoria Clipper, a big 30 knot catamaran ferry to Vic and settled into a nice hotel to wait for the ship. It was cold! We were not acclimated. Victoria is a lovely town but walking around in 20-30 degree weather when one is used to 90 degrees dissipates  the charm.  Happy Dynamic arrived without undue delay and we were scheduled for an 0900 offload next day. Rather amazingly we were picked up by a launch at 0830, taken over to the ship where Airstream had already been unloaded and we were aboard by 0900. Incredible! Also really nice was the fact that the ocean was staying on the outside of the boat, no leaks, the boat was in good condition, not too dirty, the engine started and the water pipes were not frozen!
With a good weather forecast and the notorious Strait of Juan de Fuca mill pond smooth we just pulled off  the side of the ship and headed across the strait to Port Angeles where we could clear the boat back into the the USA for the first time since April 1st, 2008. That felt rather good I will say. We spent a night in Port Angeles and motored the next day to Port Townsend. Spent a night there and then had a choppy motor against wind and current  to Shilshole Bay Marina in Seattle. A night there and then through the Ballard Canal and locks into Lake Union.  It was a lovely passage. The snow in the mountains of the Olympic Peninsula was a fitting visual climax to the trip. That’s the end of this voyage. 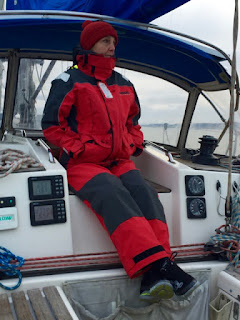 Sooooo………by GPS we’ve put 29,945 nautical miles on the boat since departing Humboldt Bay. That does not include the estimated 12,000 miles the boat did on the deck of ships from Singapore to Marmaris and from Golfito to Victoria. We’re at a nice convenient slip at Discovery Yacht’s docks on Lake Union and the boat is for sale. Mike and Beth Locatell  who own Discovery Yachts are old friends who we’ve bought two boats through and sold one. Now we hope to sell another soon.
We’ll be living on the boat until the middle of January. The day it sells will be one of mixed feelings for sure. I intend to post one more blog concerning this little venture. Maybe I’ll have some cruising thoughts sorted out for that one. For now we’re back to thinking about AIRPLANES!

I'll sure miss your blog!

Hi Bill and Janet!
You are in my home town now! My Centurion 42 is at Shileshole. I've been following since the beginning. Glad Airstream is back in the US safe and sound.
Best
Marcus

Congrats my friends! You've done well while Mokisha is in the Philippines....I wonder if we'll ever get around! I will miss your blog & adventures. Please send me details & price for Airstream as we know people who are looking for boats. I'm sure the day she's sold, you'll have those anxious feelings of getting rid of an old friend who's carries you around the world but there are other adventures out there...enjoy! Merry Christmas & Happy New Years!

Congrats on your fabulous voyage...now airplane adventures await you. I hope to see you in Seattle very soon...Manila says Hi !

Congrats on a most excellent series of adventures and thanks much for sharing them over the years. Good luck on selling Airstream, I'm sure that will be an emotional time given all that y'all have been through with her. We are back in the Frozen Tundra (Iowa) for the Holidays, so can commiserate with you on the cold. Let us know next time you get to the Bay Area would love to get together and share some stories. We are planning on doing the 2017 Baja Haha with Chance -- assuming it is still on (since Spindler has retired), so if you need to warm up next winter and need a sailing fix y'all would be welcome to join us in the Sea of Cortez.

Merry Christmas (belated) and the Happiest of New Years,
Mark and Deb

Happy New Year to my wonderful adventurous friends!
I glad your boat made it safe and sound. Great pictures of you dressed for cold, as it is as cold back home. It's very frustrating to see you in shorts with tans and where back here twittling our thumbs in the rain and fog. I'm sure it will be sad to sell the boat, but she was a good friend for many travels. We will all be happy to have you close and at home. May the new year bring you much joy, peace, health and a new form of excitement in finding a flying vessel.
Cheers,
Christina