Danger warning, alert! Thou shalt not leave thy luscious sweet chocolate brownie uneaten in  thy luxurious hooch over the sea. Beware, marauding Coatis! Yes folks,  these cute long tailed smoochy faced critters have no respect  for your personal space.
You want lovely open air accommodations in the most beautiful and unspoiled wildness of Costa Rica? You learn to take a few precautions. Coatis will walk right in. If you close it they’ll open your sliding screen door.  They’ll go through your bathroom stuff. They will eat your chocolate brownie! Yelling and throwing things  will only get you a snotty look. Where’s my BB gun? A little sting in the behind might prove more effective.

So we’ve been doing some land travel in Costa Rica. Two trips over the past couple weeks. Killing time in a most enjoyable manner. We took a local ferry over to the Osa Peninsula, the wildest and most untraveled part of Costa Rica, and stayed four nights at the Bosque del Cabo Lodge. This place we can give the very highest recommendation. Expensive but gorgeous. Eight hundred and fifty acres of forest property five hundred feet above the very tip of the peninsula. 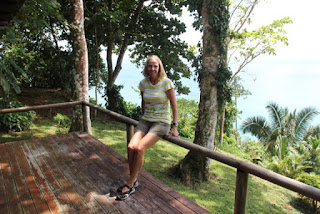 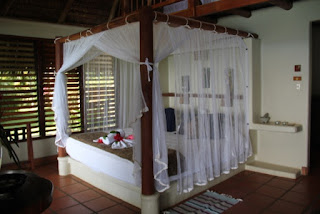 There are eighteen ‘cabanas’ , all very private, with every luxury and great food. What you will not find in this very isolated place, a forty minute drive over a very rough road from the ferry landing, is entertainment of any kind or night life beyond a drink with fellow guests in the nice bar.

This is a place to walk miles of beach where the only foot prints are your own. Where you have Toucans and Scarlet Macaws in the trees above your deck and where you may have ten Coatis and half a dozen Agoutis in sight at any given time.

All four species of monkey found in Costa Rica are common. There are Jaguar, Puma, Ocelot and Margay. We saw no big cats but another couple did have a nice viewing of a Puma stalking an ant eater. Since this is the low season  there were a grand total of eight of us at the lodge. It was one of the nicest places we have ever stayed, anywhere.

Bosque del Cabo was a tough act to follow. We laid back a few days on the boat and then took off on a long planned road trip. And road trips in third world countries have a lot more potential danger than any Coati. Perhaps my most death defying travel feat was surviving three months on a motorcycle in Thailand. Costa Rica was nothing like that but the roads vary from decent modern highway to nearly impassable by four wheel drive.

The quality of driving is pretty low, not fast, just bad. We rented a small four wheel drive car, a Daihatsu Terio, which is nothing I would recommend for purchase. Its a dog, but it did get us around without failure, crappy tires and all.
We drove up to San Jose and spent a night at the Park Inn  Radisson. Very clean and modern with every amenity and a huge corner room. Thank you Radisson. We did a little looking around  in San Jose. The city seemed decent enough but with no real allure. We did have a drink at the Grano de Oro Hotel which is a gorgeous place, an old coffee magnate home,  and where we intend to stay when next in San Jose. From San Jose it was a four hour drive through progressively higher terrain up to Monteverde and the cloud forest national parks. And Monteverde is a very mixed bag type place. I have a feeling its on the Lonely Planet backpackers bucket list. Even in this off season is was bustling  with low end, but over priced, tourist activity. The Arco Iris Hotel where we stayed was quiet with nice grounds and very friendly staff. The countryside is lovely.
Our main goal was some hiking in the cloud forest parks. This we did and it was worth the trip. The higher altitude, five to six thousand feet, forest is in cloud most of the time and is a cool rainforest environment. The walks were were full of life.
The flip side of Monteverde is that there is that unpleasant grasping and hustling of the tourist dollar. Costa Rica is an expensive country in general but they really come after you in Monteverde and unlike the Osa, you are not necessarily getting your monies worth. And although most people are nice there’s an undercurrent of ‘screw the damn tourist’ that is not unusual in this kind of place. So Monteverde?? If you really want to go there, OK.
After two days in Monteverde it was back down the coast to the town of Manuel Antonio and the national park by that name. The Velo Bar Hotel was nice and the walks in the coastal forest were interesting. We did have some very nice views of Three Toed Sloths, one with a baby which was very cute. Manuel Antonio is also very much on the tourist trail and much of what applies for Monteverde applies here. But the beaches are broad and firm,  with fine sand and a gentle surf break, very inviting.

Now we’re hanging out on the boat in the rain. Its been absolutely pouring the last twenty-four hours and may continue forever! Maybe not. But today will be a good day for a couple interior boat jobs. We’ll be here until about the 1st of December when a SevenStar freighter will be  coming through. We’ll load up the boat on that sturdy, we hope, vessel and SHIP IT TO VICTORIA, BC! More on that next blog.


Posted by Bill and Janet Wickman at 9:08 AM

Give us a yell when you're in Victoria. We're a few miles west, on Orcas Island. Our new boat is in the Deer Harbor Marina.
Mike & Liz: (S/v Argonaut)
S/V Drifters