We spent a chilly three weeks in Seattle.  Temperatures were in the twenties at night and thirties in the day. An occasional rise to maybe forty-one but darn seldom. There was a nice break for a week in Colorado for a family Christmas.
We spent the Seattle time getting the boat ready to be shown to potential buyers and socializing with friends in the Seattle area. The boat was actually in reasonably good condition but it is amazing how much ‘stuff’ can come off a machine that’s traveled around the world in the last nine years. And how much cleaner you can really make it, once the stuff is off,  when motivated by a potential sale. I guess that translates as the power of money!
Amid all the lovely times with friends and the mild drudgery there has been some time for reflection on this trip.  “What do it mean”…what did it mean? What’s important? Maybe, what’s not.  That’s for the next, and probably  the last,  post of this blog. For now I’d like to answer the two questions that always come up when we meet someone who wants to chat about the trip.
Question Number One:  WHAT WAS YOUR FAVORITE PLACE?

I used to roll my eyes at that question and say something like ‘impossible’. There were too many wonderful places from the Pacific to SE Asia to Greece, Turkey and the Med. But lately its become obvious it deserves an answer. For me that answer is “Vanuatu”.

The physical beauty of the islands that make up the archipelago, the relatively intact indigenous culture and the experiences we had there made it very special.
Coming into lovely, lush, undeveloped Resolution Bay on the island of Tanna arriving from Fiji with the active volcano of Mt. Yasur erupting above the bay, the same volcano that has been in continuous eruption since Cook first saw it in 1774, was a wonderful beginning. We had a rugged but beautiful ride in the back of a truck over the mountains to the community where we could check into the country.
We hiked to the rim of the volcano and spent a spectacular evening viewing the eruption. We sailed the trades north into the archipelago and enjoyed  the relative sophistication of Port Vila and the unspoiled villages everywhere else. 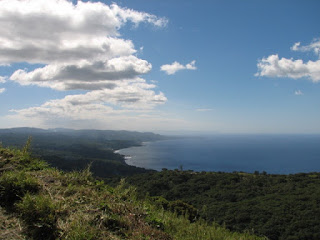 We chuckled that Vanuatu ‘officially’ declared cannibalism to be over in 1968. And that the word hadn’t got out completely because an unlucky tourist got killed and eaten a couple years before we arrived. We met sweet people everywhere. 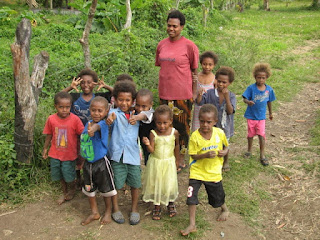 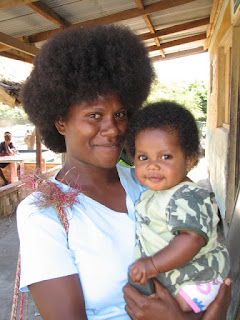 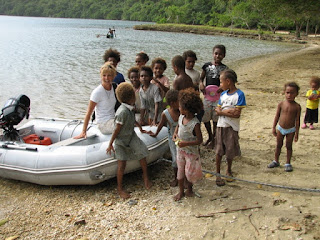 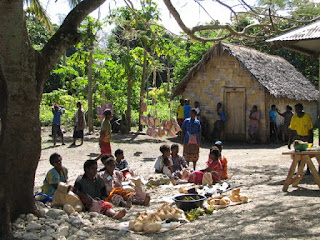 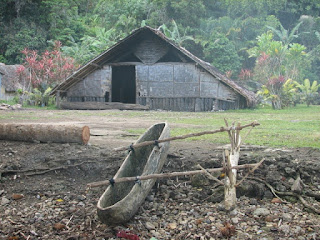 We visited “cargo cult”  villages where “John Frum” is the principal god worshipped, especially on Tanna. 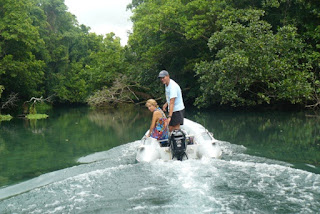 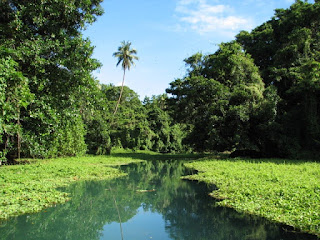 We took our dinghies up the cool freshwater streams to the ‘blue holes’ on Espirito Santo. We dove and did penetrations to depths of over two hundred feet on the spectacular wreck of the President Coolidge. 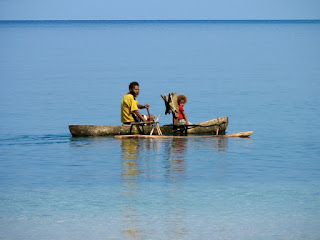 James Michener got his inspiration for “Tales of The South Pacific” from his time on Espirito Santo during WWII.  Vanuatu was the “New Hebrides” in those days. To me it is still a most special place. 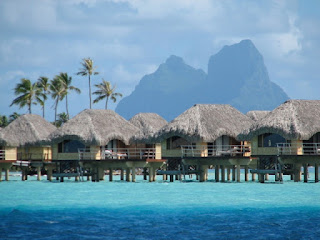 When Janet is asked that same question she is likely to respond with “the South Pacific”. When I bug her to be more specific she will say,  “French Polynesia” or “Bora Bora” or “Moorea”. The part of French Polynesia known as the Society Islands was most special to her. 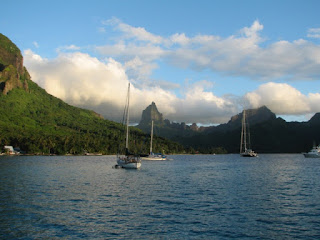 She would say the spectacular beauty of the islands themselves, Moorea in particular. She loved the snorkeling around some wonderful reefs. 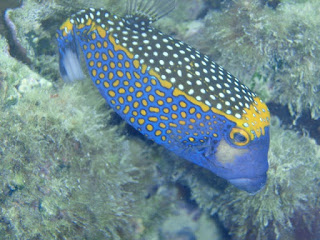 Friends on Tahiti showed us some beautiful places and provided some wonderful meals.
Hamid, your lasagna is still the best we’ve ever had, anywhere. We had memorable times at Bloody Mary’s. There was a nice mix of traditional Polynesian culture and modern European sophistication. 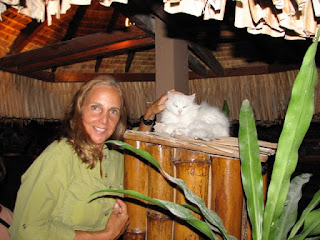 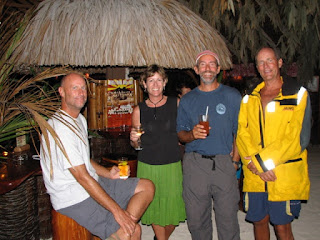 Since we were there in July during the Hiva festival  we saw great dance and drum contests over several islands. The final competition on Bastille Day, also Janet’s birthday, was marvelous. 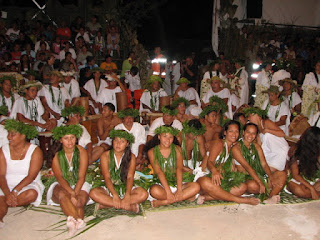 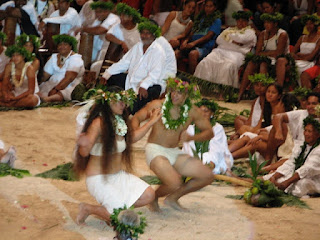 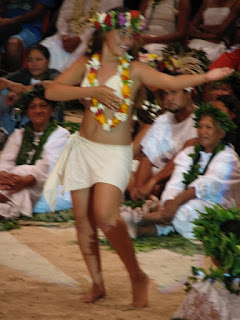 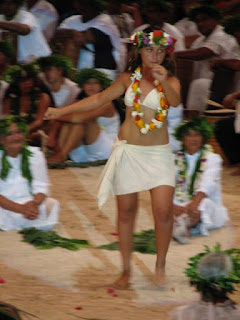 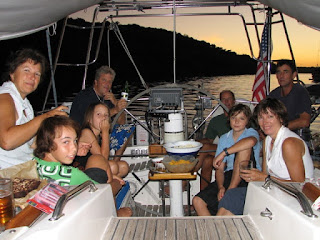 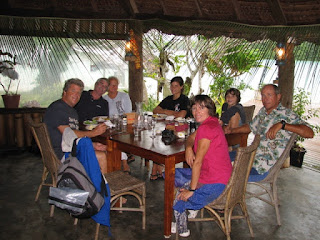 Question Number Two:  WERE YOU EVER SCARED?

The short answer is, “No”. We each had our fears. Janet’s was hitting something on a passage and sinking the boat. Mine was losing someone overboard, including me of course, but her or a friend mostly.  Would I have felt worse watching the boat sail off into the distance without me or searching a big sea for my lost sweetie or a good friend?
I don’t even like to think about the latter. Very thankfully those fears were not realized. There were “interesting” moments. A midnight, preventer breaking, slam jibe got my attention once.  As in flying,  weather is the big killer. These days weather forecasting and enroute information is so greatly improved that if one plays by the rules the chances of getting in serious trouble are greatly reduced. We had some rough passages but the boat was very confidence inspiring and proved to be a great dry, safe and seaworthy machine.

We used Commander’s Weather on all the long passages, and another Australian forecaster as well on the passage down to New Zealand from Tonga. Commanders was always good and gave us confidence in our own analysis of the grib files and other info available by HF radio. So, having been severely scared a few times in other activities and finding that to be greatly overrated as an experience, I’m very happy to relate we were never really scared on this trip.
I’m still thinking over this experience and with a little luck I’ll be thinking it over for a long time. The next post will try to summarize some of those thoughts and try to communicate some ideas that might be helpful to someone interested in this kind of experience for themselves.

Love to all,
Bill & JanetSV Airstream


Posted by Bill and Janet Wickman at 4:39 PM

Nice wrap up and beautiful photos...oohhh the South Pacific !

I'm not sure you should talk about cannibalism and in the next sentence say you met "sweet" people.

I'm sad that this is your last post. We totally agree on what the best spots were.... Vanuatu for its diversity of cultures and incredible scenery and water and Moorea,etc. for the beauty and amazing snorkeling. We'll miss your great writing. hugs to you both...

What an adventure! Thank you Bill, for sharing your photos and thoughts of travels.

Υour adventures in these parts of the word are fantastic. Thank you for your photos...

Bill and Janet, and friends,
We, too, loved Tanna Island and Moorea/Bora Bora and the neighboring Society Islands, for all the same reasons. Our parade in Roratonga was lots fun, too. (Yachts of Women of Courage.)
Fair winds,
Michael and Barbara Lawler
"Traveler"

Nice i am following in this entire blog.