To The Panama Canal

Ah yes friends, the sounds of something nasty breaking on a boat. Immediate loss of propulsion although the engine is running fine. So what do you think? Transmission? That was my assumption, never having had complete faith in the Hurth ZF-15 system since we broke one heading up the coast of Northern California many years ago. But, what the——, it doesn’t really matter when you’ve no way to fix it at sea. This pleasant little event occurred on the way to Linton Bay Marina from the San Blas Islands of Panama about three forty-five on a rather choppy but light wind afternoon. So we got up sail, and the wind died. Then the wind filled in on the nose. We started tacking along the coast towards the narrow channel leading to Linton Bay from the east. We got ahold of Adam Baitel  the marina manager using the SAT phone and he made arrangements to tow us in when we got close. The wind finally veared around to the north. It got very dark. It rained. We were able to clear the last islands into the channel without more tacking. A panga and Adam in a skiff met us and towed us into an anchorage for the night and to a slip the next morning.
So it wasn’t the transmission. The propellor shaft, a 35mm diameter stainless steel shaft, had broken cleanly in half just where it exits the tunnel on the transmission v-drive. Pretty amazing IMHO. No impacts, no sign of external damage. The mechanic at Linton Bay was of the opinion that it had been an original manufacturing defect and it just finally broke after thirty years of use. That’s as good an argument as any.
We had departed Cartagena after a nice enough stay. Cartagena has a great reputation as an exotic and lovely city. Sorry to say we were not that impressed. It was ‘OK’. It was a decent stop on the way across the southern Caribbean but in our opinion not a destination in itself. The best time we had was going out with Dave Elbow and his son and son’s staff for an evening. Dave is a fellow NWA retired pilot, fellow anchorage pilot, four engine driver extraordinaire, and Bon Vivant!  Thanks Dave, for a nice evening. 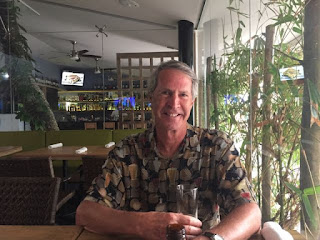 So we left Cartagena in very light conditions and motored the entire way to the Coco Banderas Cays in the San Blas Islands of Panama, 187 nm. Lovely anchorage in the Banderas. Beautiful little palm tree islands with white sandy beaches. No development. The San Blas are the home of the Kuna Indians and the Kunas have a semi-independent arrangement with the central government of Panama. 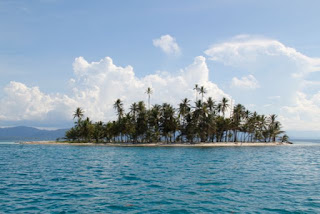 They maintain a very traditional culture and are famous for their intensely colorful embroidered appliqué “molas” which are truly lovely. So we had Kunas in their canoes stopping by every day to sell us molas and lobster, fish, coconuts, etc, etc. Very sweet and very interesting people. The whole Kuna/Panama arrangement is complicated but we would recommend the San Blas to anyone going that way. We only spent a week, people spend years cruising the San Blas. 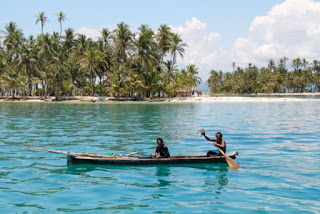 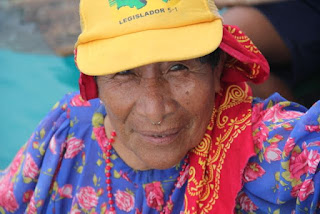 From the San Blas we were heading to Linton Bay Marina to visit Felipe Serrano, an old friend who I saw last saw when we flew together in Greece in 1985. Felipe has his boat currently hauled out a Linton Bay doing a bottom job and other work.

Linton Bay is a new marina with very nice new docks and a big new travel lift. They have very big plans for development and a great location. The other amenities haven’t come yet but they got us hauled and their maintenance staff was very helpful and competent. They actually had another 35mm shaft in stock.

Of course it had to be cut to length and machined to fit our MaxProp and the transmission coupling. We got the prop disassembled and the shaft out (in two pieces of course) and got everything machined and back together in a week. It coulda been worse and it coulda been a lot more expensive. Rather than life on the hard with no facilities available we stayed at a nearby guest house, the “Bamboo Guest House” run by a nice German couple and were a lot more comfortable than we would have been on the boat. The staff at Linton Bay Marina all proved to be very friendly and helpful. Other than the machining, I could have done this work myself, I’ve done it before, but having a professional to  work with was reassuring and we did well together. The run from Linton Bay to our present location was about thirty miles and things seem to be running very smoothly. With a little luck this repair will be permanent.

So our present location is Shelter Bay Marina, just inside the breakwater at the entrance bay to the Atlantic side of Panama canal. We said goodbye to Felipe and our new friends at Linton and made it here in five hours. Shelter Bay is a very isolated spot but also a very full service marina with just about every comfort. We have nice new friends, Kenny and Betsy Linn, who we met in the San Blas and who are following a similar path, very near us here in the marina.

Tomorrow morning, the twenty-third, we haul out at 0800 and by afternoon we should be at the Crown plaza at the Panama City Airport. Tuesday we fly home via Atlanta and San Francisco. Its been quite a season of sailing and travel. I’ll recap and offer some comments in the next blog after we get home. Wish us a smooth trip!

Love to all,
Bill & Janet
SV Airstream
Posted by Bill and Janet Wickman at 10:21 AM

Wish I was there. In Mexico doing boat work. Finally getting everything out of storage and in working order. Will be home Thursday late. Talk to you soon

As Nancy would say...wow,wow, wow! Yah, it could have been much worse. Funny how things like prop shafts, and thru hulls!, can just up and fail like that. But, as to be expected, like you guys finessed the fix nicely.

Bill & Janet - Looks like I will just miss you in ATL ! I hope you get a seat up front and on your first try ! Cheers, I'm off to JFK, then alHR on Tuesday.