The installation of the new lower shrouds went well. After paying the exorbitant shipping fees I had a dread that something wouldn’t be right, that some dimension would be incorrect. Not so, everything is as it should be and Lennart  “Lelle” Davidson, the rigger in Bonaire, proved to be a guy who knows his stuff. We got the rig slackened up, the new lowers installed and the rig retuned in about two hours. Everything looked good and the voyage to Cartagena proved that, so far at least, its pretty much the way I want it.
We departed Bonaire with some sadness. The people at Wannadive had become friends and we had some good times with them. Between Janet and I we did eighty-five dives on Bonaire and felt it really was an excellent dive destination. True, there were no real mind blowing once in a lifetime dives. Not that we saw anyway. However, there are many, many miles of easily accessible and quite excellent reef with a great variety of reef fishes, coral, sponges and about any kind of life you might expect to find in a healthy tropical reef system. The large Tarpon we saw on almost every dive would let us get quite close. There were as many as seventeen around us on one dive. It is a good place and we’d recommend it for a dive trip. We also had fun with the staff at the marina restaurant and bar and they were nice people
But this season has been about moving west and after seven weeks in Bonaire it was time to resume. We did a non-stop to Cartagena. 510 nautical miles in 77 hours, lines off at Harbour Village Marina to lines on at Club de Pesca Marina in Cartagena. We sailed the first two days in moderate conditions and motored the last due to light air, laziness and the desire to get into port during daytime. Rounding Punta Gallinas, the “Cape Horn of the Caribbean”,  in those conditions was no problem although there were some interesting seas. It was easy to see how in gale conditions you would not want to be anywhere near the area. So we made it to Cartagena with no problems and no breakages and we’re comfy and secure at the rather classy Club de Pesca Marina

Its hot and humid and very hazy although there were some thunderstorms in the area yesterday which seems to clear things out a little. There seem to be no mozzies here at the marina which is nice for a change. What we’ve seen so far of this city has been interesting but not world class wonderful. The harbor area of Boca Grande and Santa Mari is posh Miami Beach style high rise.  El central is  the old city of Cartagena which dates back to the 16th century. We’ve done some exploring around and we have a lot more to do. So far we are underwhelmed by the old city, it’s too touristy and not as picturesque as its touted to be.

We’re a rather jaded pair of course, but  Cartagena seems like a good place to stop enroute to Panama and not a world class destination in itself. People are sweet, there’s lots of well armed security at the marina, lots of cops on the streets, cabs are cheap and prices in general are quite moderate. There are very good super markets for provisioning and plenty of good restaurant food available. Also, true civilization can be found in the fact that they know how to make a really good chocolate shake! There is hope for Columbia!

We plan on being here ten days, departing Tuesday the 3rd of May for the San Blas Islands of Panama. Should take  just over a day for our planned landfall. The boat is in good shape with the exception of the fridge which has ceased to cool once again. You may remember it failed on the Atlantic crossing. I had the coolant filled in St. Lucia and it seemed to hold pressure and to have solved the problem. Well, it quit again and seems to be out of coolant and that shouldn’t happen in just a few months. We’re supposed to have a service guy here this morning and hopefully the fix will be simple enough. Of course a different service outfit was supposed to be here all day yesterday and never showed! We’ll see. 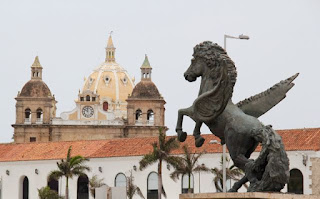 So we’re both homesick and by next week it’ll be time to get moving towards Panama and ultimately towards the great white bird homeward bound. With a little luck there will be some very good stuff between here and there, the San Blas Islands  are supposed to be wonderful, but home sounds pretty good.

Love to all,
Bill & Janet
SV Airstream
Posted by Bill and Janet Wickman at 6:26 AM

Great blog as always. We LOVED the San Blas Islands. Spent about 3 weeks there, but know sailors who spent months. Hope you take a little time to check them out. We were ripped off a bit by the customs guy when we checked in (he needed to be bribed in order for us to get our stuff approved same day of arrival). Other than that, just amazing people and great, very poorly charted islands. Enjoy and make sure you buy some molas.... they will look great in your house.

Sounds like the home stretch ! I enjoyed the San Blas Islands years ago, hopefully they are still nice.

Τhe first 2 pictures are some of the best that we have seen!! The trip looks very nice but to
repair all needs very good and specialist man for that. Be healty and good trips with Jannet.