We’re back in the Pacific! Home waters. Balboa would be happy,  the sea does appear to be very ‘pacific’ this morning. 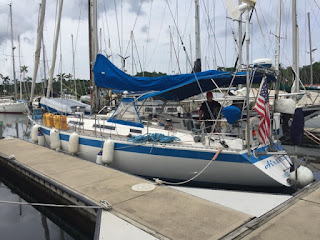 We arrived back at Shelter Bay Marina, where we had left the boat last spring, as scheduled on the 30th of September. The boat appeared to have been well cared for and the work I had requested was done or as nearly done as could be done before launch. I installed some new zincs and checked out systems (everything seemed to be working) and we were ready. Next day, right on time which is a minor miracle in Panama, we were in the travel lift and then back in the water. All went very well.

One can arrange their own canal transit but most people use an agent to handle the arrangements and formalities. We used Erick Galvez of Centenario Consultant Agency. He proved to very helpful in many ways and is highly recommended. Through the agent the canal authority measures a boat and then schedules transit. We wanted the 7th and 8th of October and that’s what we were assigned. We had a few days to relax, get the boat in shape and wait for our crew to arrive. The one thing that proved a real pain was, and of this date still is, refrigeration. The damn fridge would not fridge. Or at least it would fridge and then not fridge. At Shelter Bay “Greg, the engine whisperer” is the systems and engine guru and we spent about four days struggling with this beast. Over time we thought it was running just right (at last!) and then it would fail after a few hours. When we finally departed Shelter Bay it had been working for a whole day straight. Guess what, it wasn’t working this morning. I got it cooling again but I have no faith it’ll be working tonight. Despite all that I learned a lot from Greg who is a good guy, he’s not to blame for this problem, and  he’s another guy we recommend.

Shelter Bay Marina itself is a good marina in a very secure location and strategically located to begin or end a canal transit. The docks are good and water and electricity are reliable. There are good shore facilities and a nice bar, pool and restaurant. We used the marina hotel rooms for a couple nights and for our crew when they arrived. They were comfortable and quiet. Shelter Bay was a very decent place. John Halley, the marina manager does a good job. Edwin Chavez, the yard manager, was efficient and effective. All in all we had a good experience at Shelter Bay and I think boats transiting the canal should not hesitate to use the marina.
So our crew arrived the the 6th as planned. The canal authorities require a skipper and at least four line handlers. We had John Powers who’s a good friend from the Pacific days, my nephew Scott DeVries and Jim and Susan Tighe who are Janet’s sister and her husband. We had been told to take the boat across the bay to the “flats” anchorage area at 1300 on the 7th and contact Christobol signal station to schedule the departure which should be about 1500. At 1300 we arrived and talked with Christobol and were told to expect our “advisor” (our canal pilot) at 1545. The advisor actually arrived at about 1730 and we were off to the Gatun locks to start the transit. This would be a night passage through this first set of locks and then to an anchorage just inside the Gatun Lake. We would be rafted up to another boat, “Offshore Lady” a drop dead gorgeous Merritt 72 sport fisherman, in a center position with a large container ship and tourist ferry ahead of us in the same chamber. Our agent supplied the required gear which was four 125 ft lines not less than 7/8” in diameter and eight large white rubber fenders. In this case we tied up with the Merritt on our port side and used our lines to keep us centered on starboard. The Merritt kept us both in the center from the port side with their lines. We ended up using this arrangement through all the locks during the transit and it made life easier for both boats. 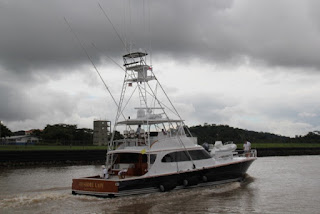 The passage through the first chamber went well and line handling was a task that we learned well enough. The canal shore staff throws a light line with a monkey fist from the lock walls and we tied that to our main lines and they would haul them to cleats on the lock wall. Then we would take in slack as the boat rose in the Atlantic side locks and slacked off as we descended down the Pacific locks. There was some of the expected turbulence as water entered or exited the locks but not as much as we expected. We had no problems maintaining position in the lock. It is a little interesting following a large ship at close quarters in the locks going up and being ahead of the ship in the locks going down. The worst case scenario would be if a lock door failed but so far that has never happened. Also interesting that the steel doors and concrete locks are all the originals that have been in constant use for more than one hundred years!We passed out of the Gatun locks and were directed to a mooring about a mile inside the lake where we spent a quiet night. 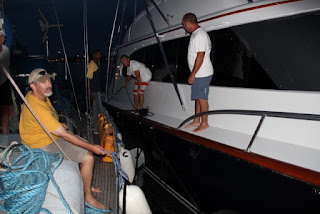 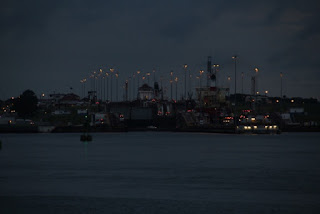 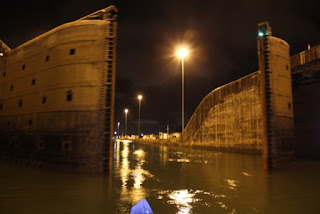 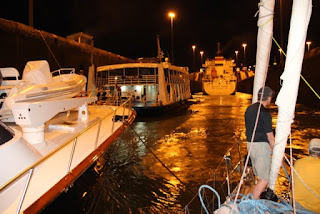 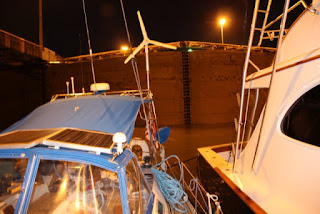 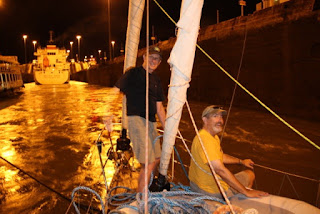 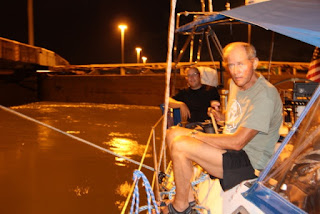 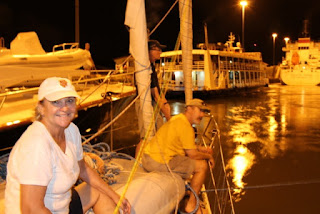 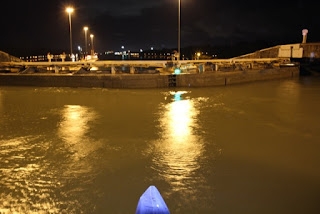 Next morning our new advisor was supposed to arrive at 0800 and arrived fifteen minutes early! Off we went across Gatun lake which when it was created by damning the Chagos river was the largest man made lake in the world behind the largest damn ever built feeding water to the locks, the largest concrete structures ever built! I believe the man made lake is still the third largest in the world and the other structures are pretty darn impressive to this day. 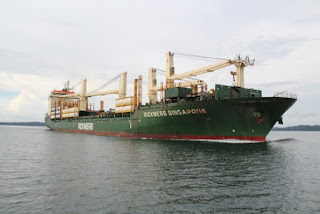 The shoreline of the the vast lake is completely undeveloped and solid jungle as far as can be seen. We held to a well marked channel with a major vessel coming the opposite direction fairly often. From there it was through the famous Gaillard Cut, the highest terrain along the route. We were scheduled to arrive at the first Pacific side locks, the Pedro Miguel Locks, at 1155. We rafted up again with Offshore Lady to pass through the locks and also through the small Miraflores Lake to the Milaflores Locks.  By this time we were getting to be old hands at this business. And we were only a little amazed when the last lock doors opened and we were back in the pacific after about seven years. Home at last? Closer at least. 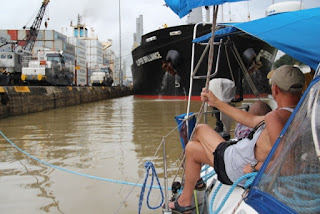 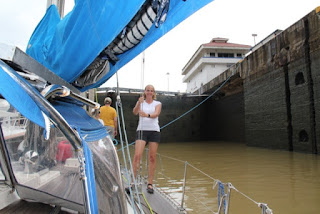 I think this was a fairly typical Panama Canal transit for a cruising yacht. There were no unpleasant surprises. The timing, once our advisor arrived the first afternoon, was spot on. Both advisors were very nice guys, very knowledgable and spoke good English. The weather could not have been better given the prevailing climate. Most of the time we had some cloud cover to cut the heat and a breeze. We had a little rain the second morning moving across the lake but it was over by the time we got to the locks. 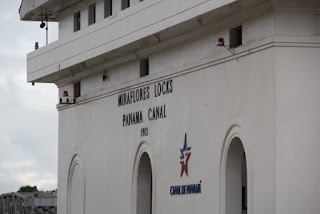 We dropped our advisor just past the Bridge of the Americas and were almost immediately in the mooring field for the Balboa Yacht Club. The club launch showed us a mooring, we picked it up, grabbed our stuff for a night and went ashore on the Pacific side of Panama. Mission accomplished! Having treated ourselves to a hotel room, actually Jim and Susan treated us to a hotel room, we’re now comfy and air conditioned and in internet contact with endless hot showers and time to contemplate our next move. Tonight that means social time and a cold libation. Tomorrow that means starting to work our way towards CostaRica. It’ll be a couple days before we actually depart but that’s our next move.

Please stay tuned. Love to all!

So cool that you are back in the Pacific ! Great job ! Hola de Sicily.(did you spend much time here on your boat ?)

Congrats! ! Wow - I wonder when we'll finally get the canal. Sounds like a great experience. I line handled for a boat before & the canal is absolutely amazing. Congrats again!

Congrats! ! Wow - I wonder when we'll finally get the canal. Sounds like a great experience. I line handled for a boat before & the canal is absolutely amazing. Congrats again!