Surreal! That’s what I thought after hitting the bunk about three in the AM after getting the boat secured to one of the super dock slips at Rodney Bay Marina. Surreal! No movement, no sounds, absolutely stabile and quiet. Sleep came pretty fast. And it ended entirely too soon as we weren’t really supposed to be moored at that position  and we were also supposed to check in with customs and immigration, the marina, etc, etc. So I got out of the rack too early and did the drill. Everyone was very friendly and laid back, fairly efficient. We moved the boat over to our reserved slip in the marina and the guys headed for home.
So, Atlantic crossing, been done before but not by us. 3018 nautical miles under the keel on our far southern route. 17 days, 17 hours and 50 minutes from the dock at Pasito Blanco, Grand Canary Island to the tie-up at Rodney Bay Marina, St. Lucia. Average speed equals 7.08 knots. Not too bad for a 42 foot boat with no real effort made to go fast. We rarely had more than one sail up and most of the voyage was done under poled out 150% genoa alone.

We motored about forty hours through one stretch of light air but on the whole had plenty of wind to stay powered up. Since the solar panels were down for much of the trip and the fridge was using excessive power before it quit entirely we ran the engine for battery charging when the wind generator couldn’t entirely keep up with the loads. But we probably burned less than forty gallons of fuel. I’ll know how much after we top off the tank.
The good stuff?  The boat remained structurally sound. That may seem like a given but it is not. Stuff happens out here and one should be thankful when the big things stay put.
The crew worked well together,  we had a great time and other than the usual minor ‘boat bites’ nobody got hurt.  What could four airline pilots, two of them ex-marines,  three of us at university together, with about 100,000 hours of combined flight experience and 150 years in the airline industry find to talk about? Lies, all lies! Norton and I solved our nation’s financial difficulties. Dan worked really hard cooking and that was greatly appreciated. Booth was the fisherman this trip and caught some nice eating size Mahi Mahi to supplement the diet. 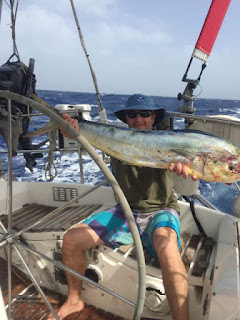 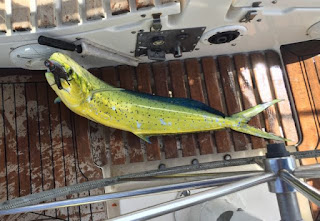 Commanders Weather provided forecasting and they were quite good as they always have been for us. I think as  pilots and life long outdoors people we could qualify at least as amateur weather forecasters   but I like to have a professional opinion for long passages and it has always proven to be reassuring. Its still hard to make the transition from dealing with a weather system in a matter of hours or minutes to taking days. Its the 600 knots versus 6 knots syndrome. We had decent winds for most of the trip from astern or nearly so.

I was very pleased with the new Hydrovane XT-Vane. Other than a problem, later solved,  that I probably caused way back in Turkey by not assembling something properly,  the self-steering gear,  both wind vane and autopilot, worked very well.
We had lots of Dolphins around including one of the biggest pods I’ve ever seen on the way down towards the Cape Verdes. We had a small Humpback (I believe) whale follow us one afternoon acting much like a big Dolphin surfing down waves. We had a few interesting birds including some Fairy Terns which are lovely to see. And we had a couple shore birds come aboard far out to sea. I always feel sorry for those lost birdies. One took off towards Africa. Sayonara I’m afraid. But one stayed with us until a few miles off St. Lucia so that bird should have made it to land just fine.

The not-so-good-stuff? We had a little damage and a few systems failures. Somehow a preventer must have been loose during one of the squally nights and a slam jibe took place. Actually multiple slam jibes. The preventer and snatch block broke and the main sheet got hooked on the solar panels and ripped them off the dodger while ripping up the dodger canvas pretty well. At least the panels stayed on board and appear to be undamaged. The dodger stuff is fixable. Some tubes are going to have to be re-bent.
The fridge had been working normally, it seemed, but it hadn’t been topped off with coolant in some time. Didn’t seem necessary. It started using a lot of amps and then eventually quit cooling entirely. Bummer. But I had it serviced yesterday and its now working as it should. Oh well. From now on it gets topped off annually whether it seems to need it or not.

The inverter died. This one was purchased in Turkey three years ago. The only 110VAC inverter in all Turkey I was told at the time. It was not really a marine unit and it wasn’t expensive but it did the job until it got wet. I had a spare, actually two spares, and we suffered not. It will be replaced today.
We started getting a massive deck leak from around the mast. Whenever it rained the water just poured in around the mast boot. Yesterday I tore into the mast deck fitting and found a rip in the rubber seal around the mast. It was in the perfect position that any water running down the mast was nicely funneled right into the interior of the boat. That has been temporarily fixed and I’ll see about the permanent fix maybe this afternoon. That water leak is what killed the inverter.
We lost a mainsail batten early on. First one that’s ever came out of that sail. We also had a mainsail luff car break. The first failure of any kind in this Selden Mast system. I consider that to be a very excellent record considering its got about 30,000 miles on it so far.

Weather nastiness? Yep, seems we had more than our share of night time tropical squalls and a few were rather on the intense side. Winds over fifty knots at times. Throw in some very early AM cooling aloft and a little positive vorticity advection and things can go boom in the night. But the sneaky thing was that they weren’t really going ‘boom’. Often no lightning and never any thunder and sometimes not even much radar return but plenty of wind and rain. Interesting. At least we had no lightning strikes.
The entrance to Rodney Bay Marina was rather a challenge at night. The very narrow passage has probably the smallest and most indistinct  marker lights I’ve ever seen and no markings once past the entrance. We kind of felt our way into the bay. At least the lights were functioning but you couldn’t make them out beyond about fifty yards. Luckily the GPS charting is spot on but I never trust the charting until that’s proven. It all worked out but it was an interesting end to a long passage.

So I’m in St. Lucia. I don’t have a “bucket list” but this passage has always been part of the plan and its good to have it behind us. It was one of those things that qualify as an unforgettable experience but I won’t be looking for a way  to do it again. The almost endless roll was less than a pleasure. The guys were spring loaded to get home so we had no post passage celebration. Janet will be here the 13th and that will be quite wonderful. We plan on being in St. Lucia until about the 25th when we’ll head direct to Bonaire. I’ve got plenty of boat jobs to do to keep me out of trouble.

Posted by Bill and Janet Wickman at 1:42 PM

Glad you're in safely! Seems like it was a bit hairy at times. Glad you had a solid crew. Looking forward to catching up in person. Give our love to Janet.